Ham Shack in a Box

My wife and I are both ham radio operators and we volunteer with the Weber County Sheriff’s Emergency Communication Team.  The Sheriff’s Communications Team provides communications for the Ogden Marathon, the Huntsville Marathon, as well as auxiliary dispatch services for the County Fair.  These activities, and others, including mass casualty exercises, provide us with opportunities to test our equipment and improve our communications skills.  We also stand ready to respond at a moment’s notice to actual emergencies such as the recent fire near Liberty, Utah.  It’s a good way to serve the community while practicing our hobby.

We participated in the “mass shooter” exercise at WSU in August of 2018.  It was during that deployment that we discovered that our handheld radios did not keep us consistently in communication with others on our team while we were riding inside the improvised ambulances.  So, I decided to build a more powerful, highly portable, ham radio station that would fit in a single container.  This is not a new idea; others have done it so I thought I’d give it a try.  These stations are often built into ammo cans but I decided to put mine in a Pelican case because these are very protective cases and they feature airtight and watertight seals.  I wrestled with the problem of how to put this radio station in the case without putting holes in the case which, of course, would defeat the airtight and watertight features.  So I asked my friend, Mike Mills, who is an engineer, for any ideas he might have.  He also brought in a friend of his, Kelly Harward, a professor at WSU.  The three of us then kicked around ideas for an hour or so.  Finally, Professor Harward suggested that this might be a good project for one of his Manufacturing Engineering Technology classes to work on.

Professor Harward invited me to his Mfet 3460 (Engineering Design using Solids Modeling) class to discuss my requirements and kick off the design process.  The class was divided into two teams who simulated competing companies trying to win my business.  The teams built prototypes which

I critiqued during another class session.  There were features of each prototype that I liked but there were also things about each design that I did not care for. The two team then updated their designs and build two new prototypes.  One of those prototypes was then modified again with new features. 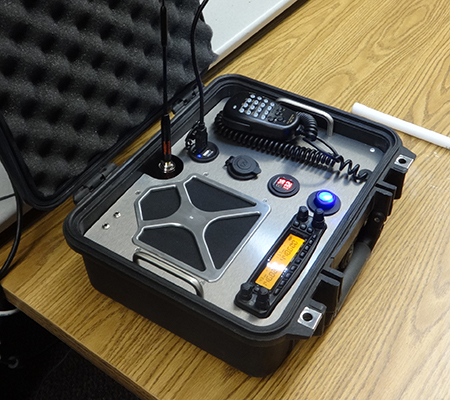 Alex Richins , one of the students built a free-standing chassis to securely hold the radio and the various components of this portable radio station. The other students who worked on the project were: Brand Foust, Michael Kidman, Jared Paskins, Riker Porter, Russell Schuh, Kaden Strate, Jake Wilson, and Daniel Wiseman.

The next meeting with the students and Professor Harward was the “wow moment.”  When I opened the Pelican case, I realized they had knocked it out of the park!  I told them this was a 100% solution to my problem.  The design is clean, professional, and functional.  I then took it home and wired it so that it became an operational, self-contained radio station capable of operating for many hours without recharging or swapping batteries.  Field testing has confirmed my initial reaction that this is a 100% solution… I would not change a thing!  Thanks to Professor Harward and his students, I now have a portable radio station that I can deploy in an emergency or at a public service event and I can put this station into operation in less than 60 seconds!