A team of Weber State students, along with Asssociate Professor Julie McCulley, are working to create portable solar power generators.
These generators are portable and designed to be set up anywhere in 30 minutes.

Ogden-Weber State University drew engineers from across the globe and provided a venue for local solar projects to shine.

WSU hosted the IEEE SUSTECH Conference for the first time in the three years that it has been in operation. Julie McCulley served as Vice Chair and Dr. Fred Chiou served as publications chair. The conference focused on technologies for sustainability, or “SusTech.” SusTech follows the university’s push for more eco-friendly practices on campus. It expands those green goals by gathering great minds in science, technology and engineering to solve global problems with climate change, pollution, food production and energy.

Engineers look at the situation and they think , "we have an unsustainable future in the world,” said Daniel Donahue, a Bountiful-based engineering consultant and chair of the SusTech conference. “It’s a completely different culture and we need to bring more of that to Utah.”

Presentations at the SusTech conference Friday provided a glance of a promising high-tech green revolution. Compost could be a new source of renewable energy. Drones could help farmers save water by targeting where and when to irrigate their fields by the meter. Cell phones, computers and other electronics could be fabricated more efficiently, require fewer of the Earth’s minerals and cost less, too.

And, if projects at Weber State are any indication, Utah’s solar power prospects look especially bright.

Julie McCulley, Associate Professor in Electronics Engineering Technology, and her team of students are exploring solar power on wheels.

Since 2011, they have designed and developed the Mobile Elemental Power Plant, or “MEPP” — a mobile generator that runs on renewables. The mini-power station fits on a 10-foot trailer and replaces traditional generators used for RV camping or as back-up power sources.

“It’s a tool I use to engage my students in renewable energy,” McCulley said. “We’re starting to add more renewable energy classes to our engineering technology programs.”

For the original MEPP, McCulley tapped 24 students from four different engineering disciplines to create a collaborative project that’s more in line with projects in the professional engineering industry.

With the latest version, the MEPP II, a handful of students are working on refining the system. They’ve enclosed the control panel and other corrodible components to protect them from the elements. They’re developing solar trackers to make the panels more efficient. Four students are working to make set-up less cumbersome. They’d like to tow the generator and have it producing power within 30 minutes.

“The new portable structure that the students are designing will allow us to take the MEPP II to various locations and set the system up quickly, anywhere, to perform research,” McCulley said.

The MEPP II project focuses on harnessing solar power because it’s the most abundant renewable resource available in Utah. But students said they’d like to see portable wind generators or mobile micro-hydropower plants. 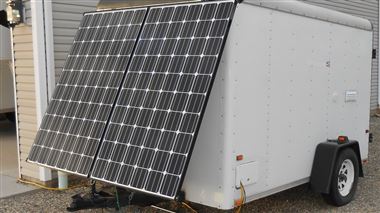 A team of Weber State students, along with Associate Professor Julie McCulley, are working to create portable solar power generators.

McCulley and her students envision an array of uses for their MEPPs. They could help keeping remote medical sites running or aid in disaster relief. They could help with military and humanitarian missions. They could also provide a quiet source of power at recreational sites.

“What we’d like to do next is market it,” McCulley said. “We’re engineers but it takes everyone, like business people — we just don’t know how to do marketing.”

Last spring, Fred Chiou, assistant professor in electronics engineering, and his team of five students finished their first campus solar charging station. The project will use the sun to power electric bikes, electric motorcycles and, eventually, electric cars so students get to class and burn less gas. 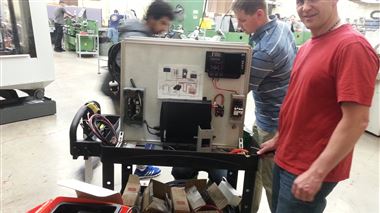 Weber State University students, from left, Rashed Almarshad, Lared Elder and Wes Hortin working on a solar charing station that will be used to power electric bikes, motorcycles and cars used for commuting to the university campus.

“The project motivation (is), we want to encourage students, faculty and staff at Weber State to take public transportation,” Chiou said.

Weber State’s Energy and Sustainability Office has tried to curb campus consumption of greenhouse gases. Since 2007, university emissions from natural gas and electricity have fallen every year. But the amount of pollution coming from faculty and student tailpipes keeps going up. Commuting creates more emissions for Weber State than natural gas, electricity, air travel and solid waste combined.

The sustainability office is trying to cut down on car pollution by encouraging alternative transit, especially biking. Rapid transit buses and trains help feed students from outlying areas into Ogden’s downtown intermodal hub. But the Weber State campus sits another four miles away, all uphill.

Chiou joked that while it’s great exercise, the incline becomes particularly daunting for students looking to bike the last leg to class.

“It’d be a big challenge,” Chiou said. “So they can take the electric bike instead.” 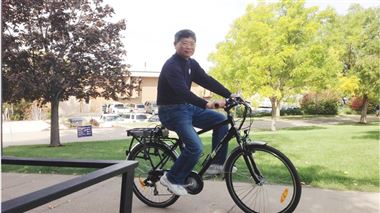 Fred Chiou, assistant professor in Electronics Engineering Technology, rides an electric bike around the Weber State Campus. The bike is part of a solar charging station for electric bikes and vehicles that will ultimately encourage sustainable commuting to the university.

An electric motor gives bikers a little boost uphill. They can use traditional pedal power downhill and on flat terrain.

The idea behind Chiou’s project is that charging stations on campus will encourage students to use electric-powered bikes. Channeling solar power takes the stations one sustainable step further.

“The charging stations could be built (throughout) the campus,” Chiou said. “We only have one right now, but our plan is to build many more.”

The solar power station team is working with two electric bicycles and two electric motorcycles. Next semester, Chiou would like to work with the campus sustainability office to purchase a fleet of electric bikes. They would be available on loan to Weber State students, faculty and staff. 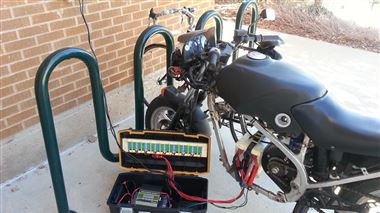 A motorcycle modified with an electric motor gets more juice at a solar charging station at the Weber State University in Ogden. A team of engineering students completed the charging station last spring. Their supervising assistant professor, Fred Chiou, would like to see several more added throughout the campus to encourage sustainable commuting.

The Weber State solar projects managed to turn a few heads at the SusTech conference. McCulley’s students received a third-place prize in a contest among 10 undergraduate student projects while the solar charging station project received an honorable mention.

McCulley said hosting a conference under an international organization helps give the university’s green efforts a global spotlight.

“It brings a lot of notoriety — there are people from all over the world here, and Weber State is promoting sustainability,” she said. “Sustainability is something everyone needs to take a part in right now before it’s too late.” 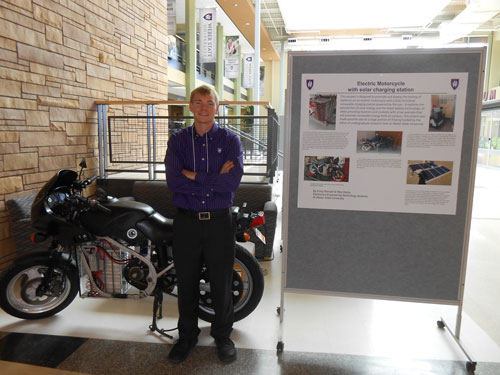 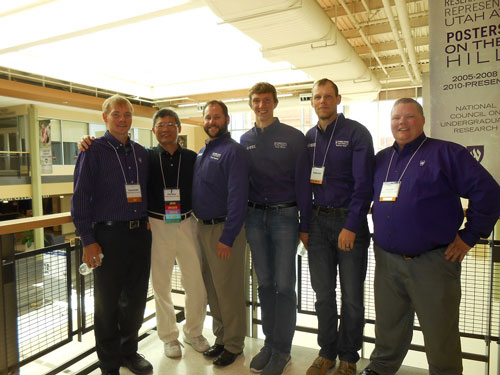 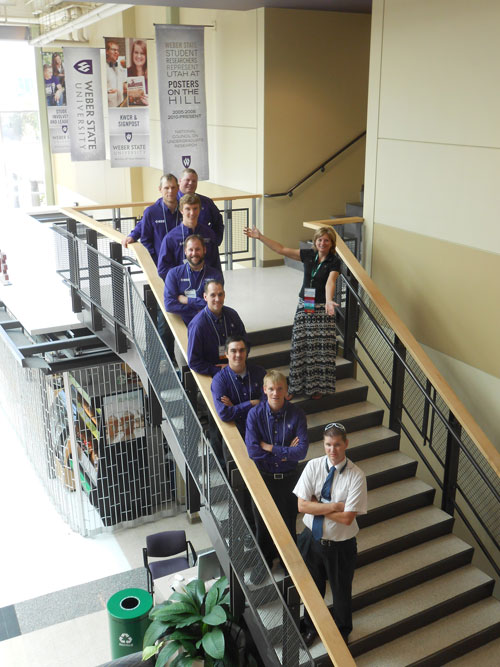 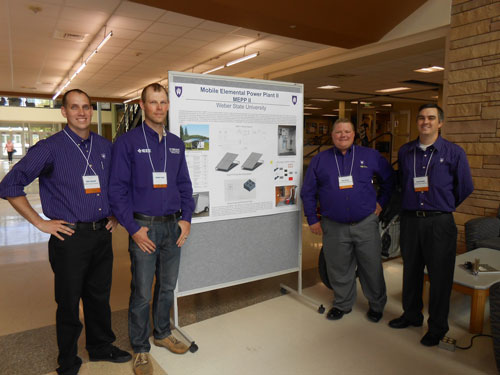 The IEEE student section assisted at the conference as volunteers. Two of the EET students, Brad Richey and John Garrett, hosted an event at the conference for Undergraduate Research students following the poster session.
Brad Richey, John Garrett, Kirk Carter and Steffen Voet, won $100/third place in the poster session for the Mobile Elemental Power Plant II Mounting Array and Solar Tracking System. Dr. Fred Chiou has a team of students that received an Honorable Mention for their poster on the Solar Recharging Station.

For another article about the IEEE SUSTECH 2015 Technical Conference on sustainability that was held at Weber State  on July 30 - Aug 1st which included 100 engineers and scientists from all over the world please click here.