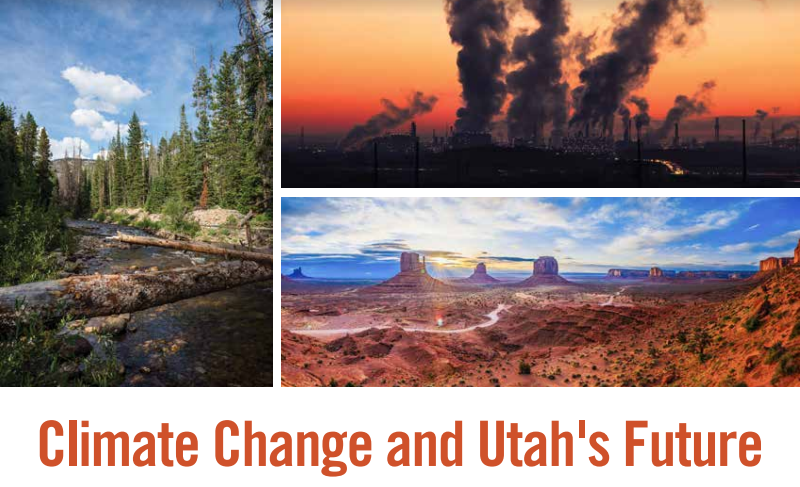 Drop in to the Climate Change & Utah’s Future Series

Upcoming sessions, which are open to all, include the religious response to climate change, sustainable building for low emissions, and the important connections of food to climate change. All sessions are held on Tuesdays, Noon to 1:15 p.m. in Lindquist Hall 280.

11/05/2019
“Sustainability:  It All Starts With What We Put on Our Plates”
Patrick Olson, M.D., Plant Based Utah
Discover how what we eat connects with climate change and our health.

The Weber State University sustainability team continues to host the Empower Northern Utah community light bulb exchange program this month, but the bulbs are going fast. Be sure to get to an event before supplies run out!  About 500 bulbs will be available at each exchange date until they are gone. As a reminder, the light bulb exchange is open to all community members, and you can participate by bringing up to 15 incandescent and/or CFL bulbs to one of the following locations:

By exchanging and replacing 15 old bulbs with new LEDs, residents can cut upwards of $100 per year from their power bill!

WSU students may also exchange their bulbs on the Ogden campus on Thursdays through November 21st, from 10 a.m. to 12 p.m., in the Shepherd Union atrium with the Environmental Ambassadors.

You may also learn about other no-to-low-cost ways to improve energy-efficiency in your home and how these actions affect our climate and air quality while cutting utility costs.

Empower Northern Utah is the latest program in Weber State Sustainability’s efforts to bring sustainability programs to under-served populations in the community. In addition to the energy and monetary savings for those who need it most, this program helps get everyone in our communities involved in and benefitting from being more environmentally conscious and conscientious. 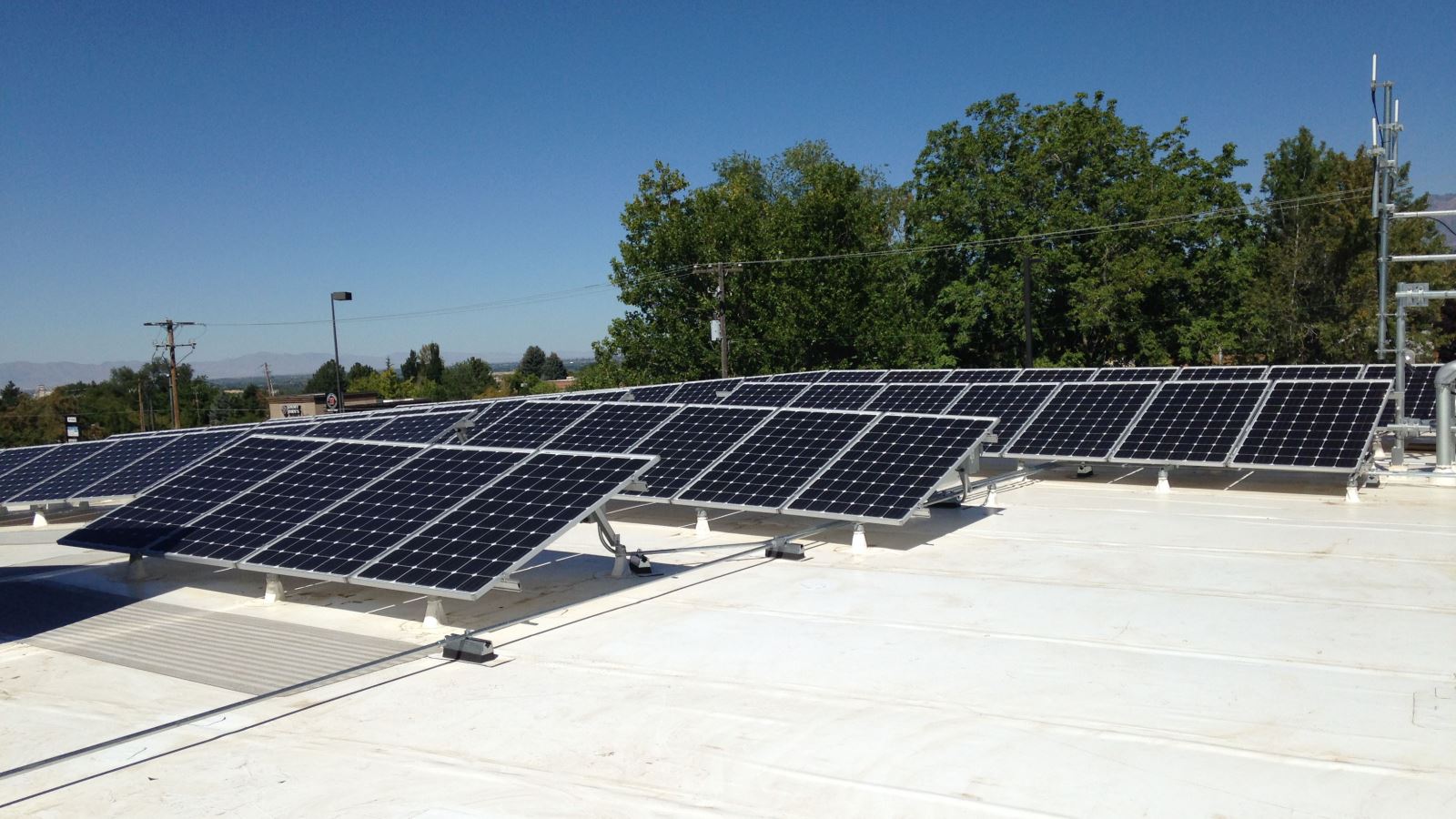 Last year a bi-partisan bill, H.B. 411, made it possible for municipalities served by Rocky Mountain Power (RMP) to opt for a 100% net renewable energy option -- but cities must decide before December 31 of this year whether they want the opportunity to explore this option.

An independent research team will work with cities, RMP, and the Public Service Commission to determine the rate for a 100% net renewable energy portfolio mix, which could include solar, wind, geothermal, and energy efficiency as part of this energy mix. This process will take approximately 18 months to 2 years. After the cities know the price, they may make their final choice of whether to opt in or opt out for the 100% renewable energy mix for their community.

If a city chooses to adopt the 100% renewable energy mix, any individual customer will be able to opt out of that energy mix and stay on RMP’s current rate schedule.

Representative Steve Handy, the bill sponsor, mentioned in an Ogden city committee meeting that the increased cost may be about 7 to 10%, which is about half the cost customers pay for the 100% Blue Sky renewable energy option that is available through RMP today. Some argue the cost will be higher, while others contend it will be lower due to the rapidly-declining costs of solar energy.

Sense and Sensibility and Sustainability

The theatre disciplines are always seeking ways to make their work as sustainable as possible. As Costume Shop Supervisor Jean-Louise England says, "We use sustainability practices in the making of costumes on a regular basis and it has been that way for as long as I can remember. We are asked to create all sorts of costumes and usually on a very tight budget. We reuse, repurpose, or “Frankenstein” (as we call it), and focus on conserving fabric and scraps. In Sense and Sensibility, we had prom dresses that had been donated and we remade them to look like the designer's vision to make them work for this production."

The materials are used in clever ways. What was once a decorative structured bodice of a dress, for example, may become a collar of a man's coat.

In addition, lighting design faculty member Jess Greenberg has written grants over the past few years to convert our theatre spaces to low wattage LED lights. In one case, we replaced 40 8" Fresnel lights with 24 ETC ColorSource PAR lights to cut watt usage from 40,000 to 2,136 watts. We frequently use recycled and reconfigured materials in our sets, and we also seek to rent them or sell them for reuse to other theatre organizations in the community to maximize their use and minimize waste. 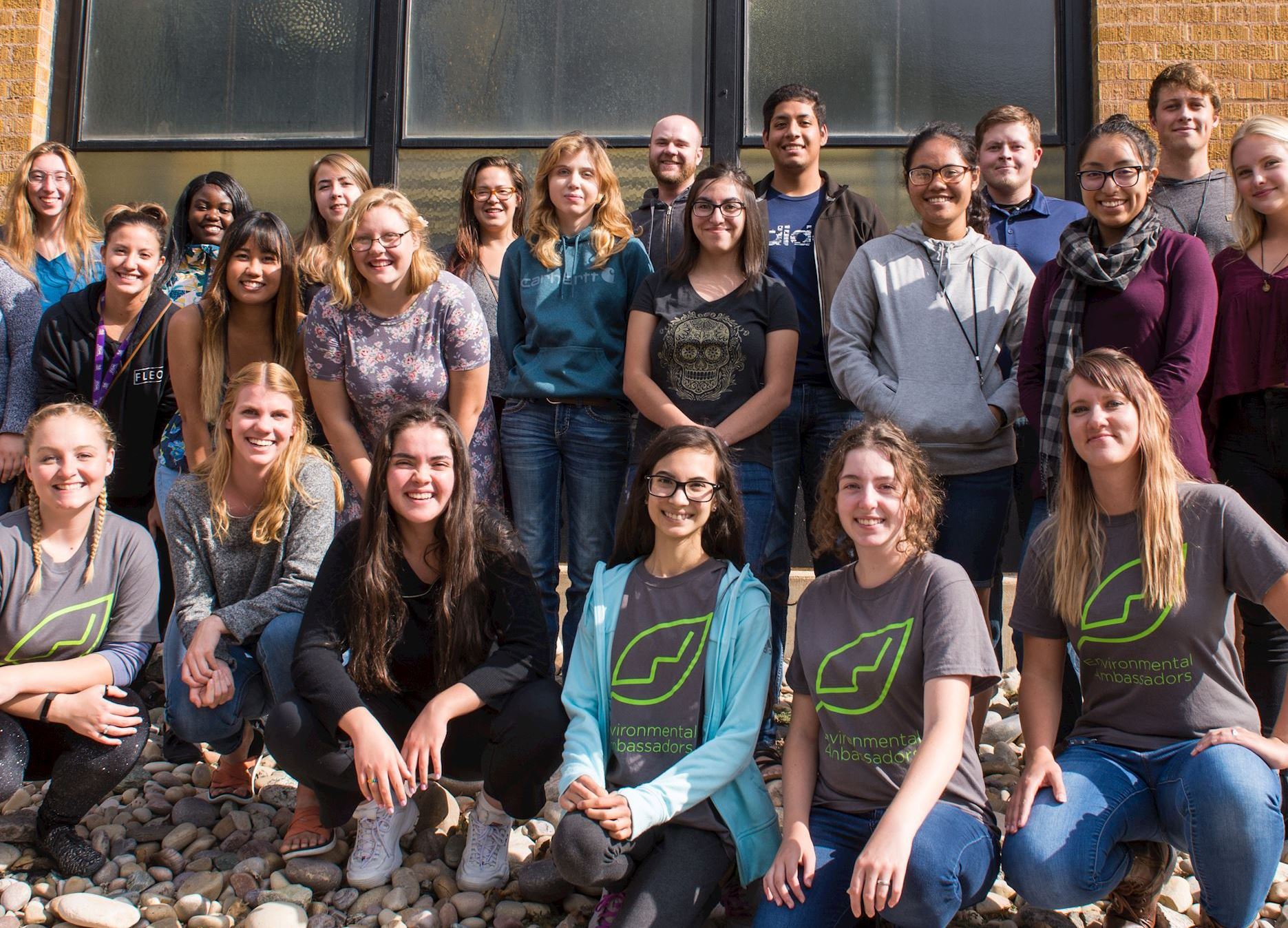 Sustainable Clubs are growing on campus. The Sustainable Clubs now includes the Environmental Ambassadors, Food Recovery Network, and WSU's Community Garden. Students in these clubs are connected by an appreciation for the environment and a dedication to creating projects which enhance sustainability.

These groups are teaming up to host regular combined meetings most every week. Meetings are open to all students. Check the events calendar for times and locations.

Please RSVP to sadiebraddock@weber.edu for the meetings so presenters can prepare enough materials. 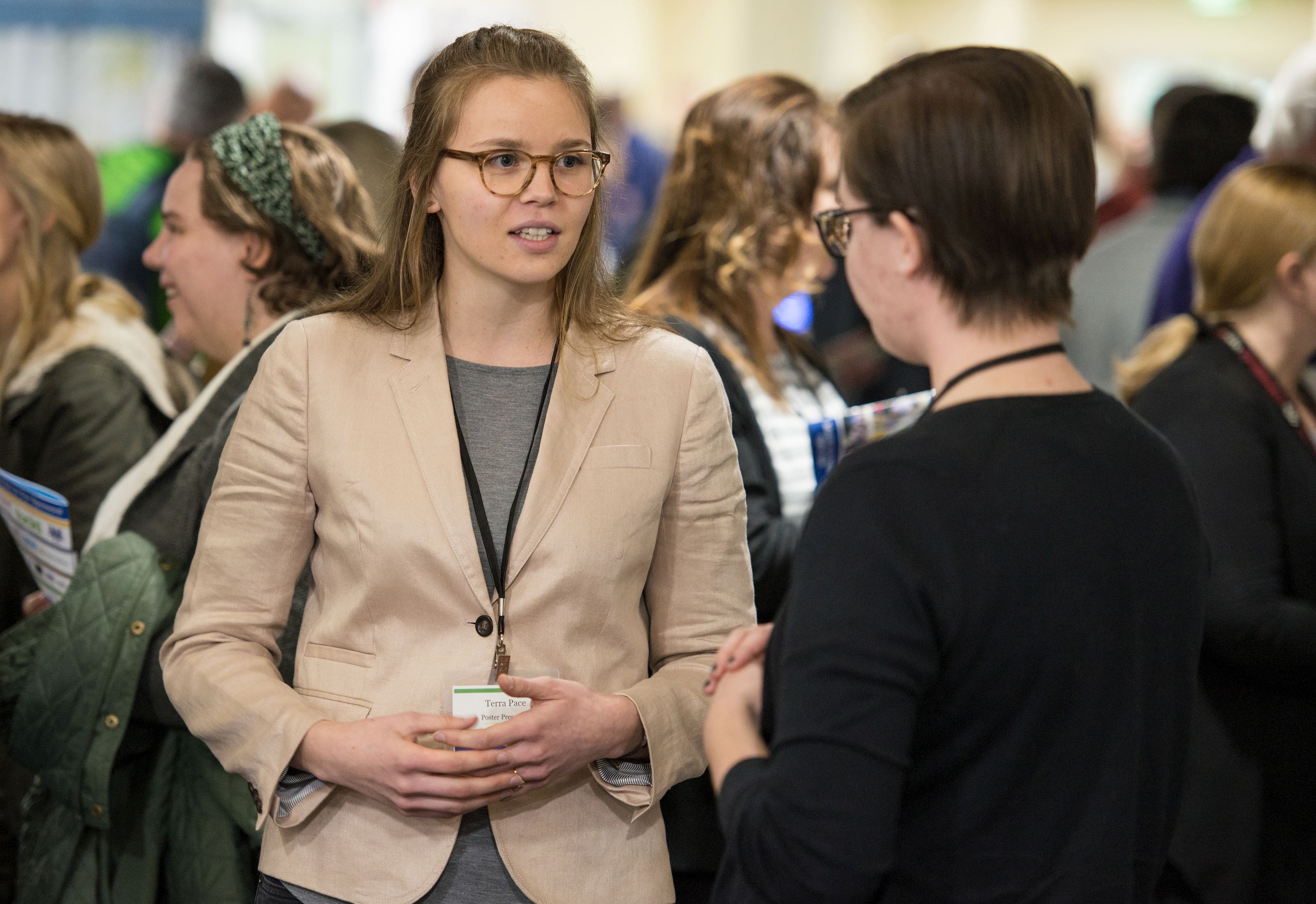 Are you a student engaged in sustainability research?

The SPARC hosts an intercollegiate Student Poster Contest at the Intermountain Sustainability Summit at WSU each year. Posters must be derived from a class project, independent work, or an internship that relates to sustainability; they should include the name of a project mentor or adviser. This year’s categories are:

Students whose posters are chosen to be displayed will receive free admission on the main Summit day, March 19, and be entered to win cash-card prizes. Submissions are due Friday, February 15th, 2020. 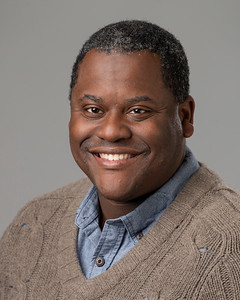 This past year, Robert took on a new position at Sodexo that enabled him to be selected for the company’s Green Team. When he started, he thought that sustainability was just a really long word for recycling. Since then he has taken sustainability to heart. Specifically, Robert has helped bring several programs to campus.  Two are Sodexo’s reusable eco-containers program and their “Skip the Straw and Go Topless” campaign. Both address the environmental and waste-related issues with single-use plastics. You can support Sodexo’s new campaigns by bringing your own reusable cups, straws, and eco-containers to Sodexo’s venders!

These campaigns are not the only efforts Robert is helping to bring to WSU. Robert works directly with the student group Food Recovery Network to coordinate food pickups from Sodexo to take to the Lantern House, a local homeless shelter in Ogden. When students are unable to take food to the Lantern House, particularly in the summer, he makes sure that it gets there so it is not wasted. He also helps manage the compost station on campus.  From April to mid-August in food recoveries this year alone, Robert has saved over 5,000 pounds of food from being wasted. That is estimated to be over $8,400 worth of food.

Robert says he has learned many things while on his current journey to sustainability. His advice: “. . . learn as much as you can but at a normal pace, don’t overdo it. Small steps make a big difference. It’s not a race, it’s a marathon.”

WSU cannot reach our 2050 Carbon Neutral goal and other campus sustainability goals without people like Robert. 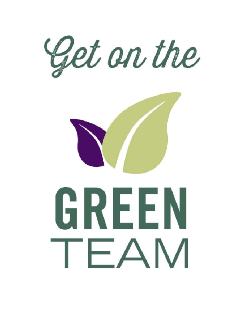 The Energy & Sustainability Office is proud to announce that the following departments have recently achieved Green Department Certification (since January 2019):

Please congratulate your colleagues on their green achievements when you see them and welcome our new green teams!

Get on the Green Team

If you are interested in getting your office or department involved in the Green Certification Program, please contact Kyia Hill at kyiahill@weber.edu or visit http://weber.edu/sustainability/GreenDept.html.

The purpose of the Green Department Program is to engage WSU offices and departments in the work of making the entire university more sustainable and carbon neutral. The program is voluntary and competitive. Participating departments assemble a green team and acquire points through sustainable practices. The number of points achieved determines certification at the bronze, silver, gold, or green levels.

Sadie Braddock is the new student sustainability coordinator in the Energy & Sustainability Office at WSU. Her main role is to promote a campus culture of environmental sustainability by managing and leading the Environmental Ambassadors Program.  This is a campus student group that does educational outreach on energy-efficiency, waste reduction, recycling, and alternative transportation. She also plans and executes sustainability-related events throughout the university community as well as assists in facilitating the advancement of our institution’s sustainability goals to become carbon neutral by 2050. “I am excited to help implement such projects and events and to meet new people who share my interest in the environment!”

Giovanni Frias is studying advanced vehicle systems at WSU. He is the Weber Cares Food and Resource Pantry specialist and also the chair for Done in a Day, a program that offers service projects every Wednesday on campus.

At the Weber Cares Pantry, he is charged with keeping the pantry stocked with food, getting volunteers, and marketing. Not enough people know about the Pantry on campus, so he is getting word out to make sure that students who need it, use it. Getting donations to keep it stocked can be hard. He has partnered with Catholic Community Services and our university food catering service. Every Friday they receive lots of fresh food and canned goods.

Tani Hatch, a 2017 WSU botany graduate, manages the greenhouse and garden at Davis campus in Layton. Showing people how they can incorporate plants into and enrich their lives is her major goal. She provides education and hands-on experience growing plants of all sorts to nutrition and botany students working as interns. Then she hosts plant sales to get those student-tended plants into the hands of others. 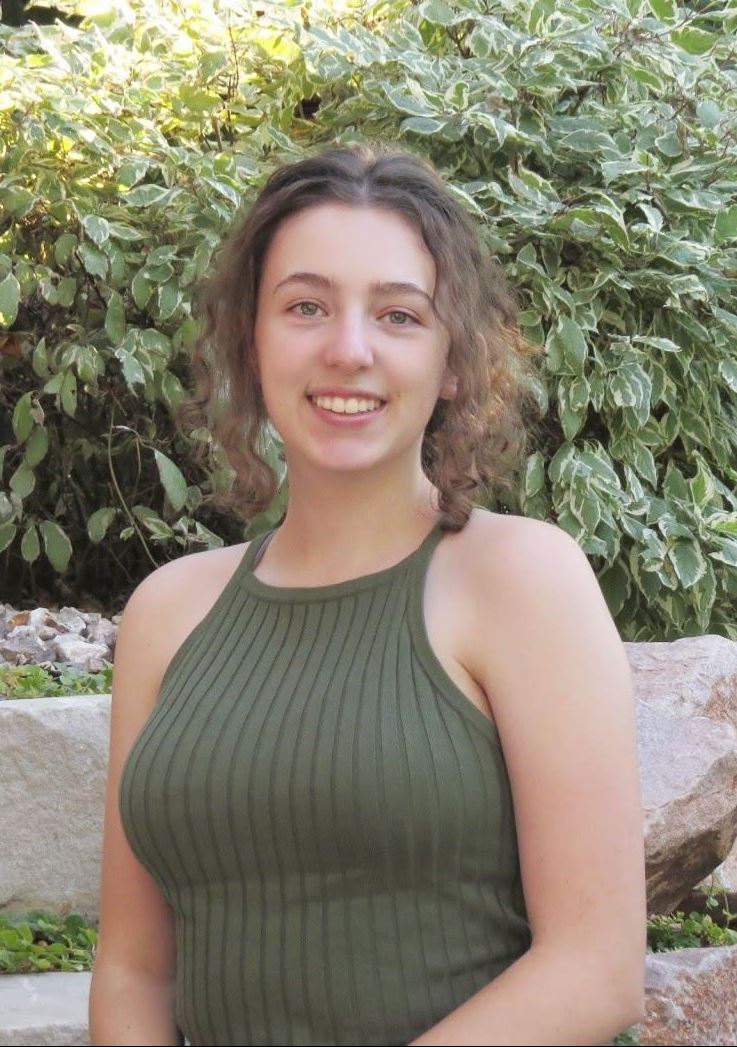 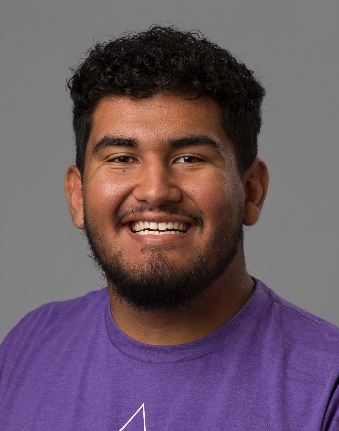 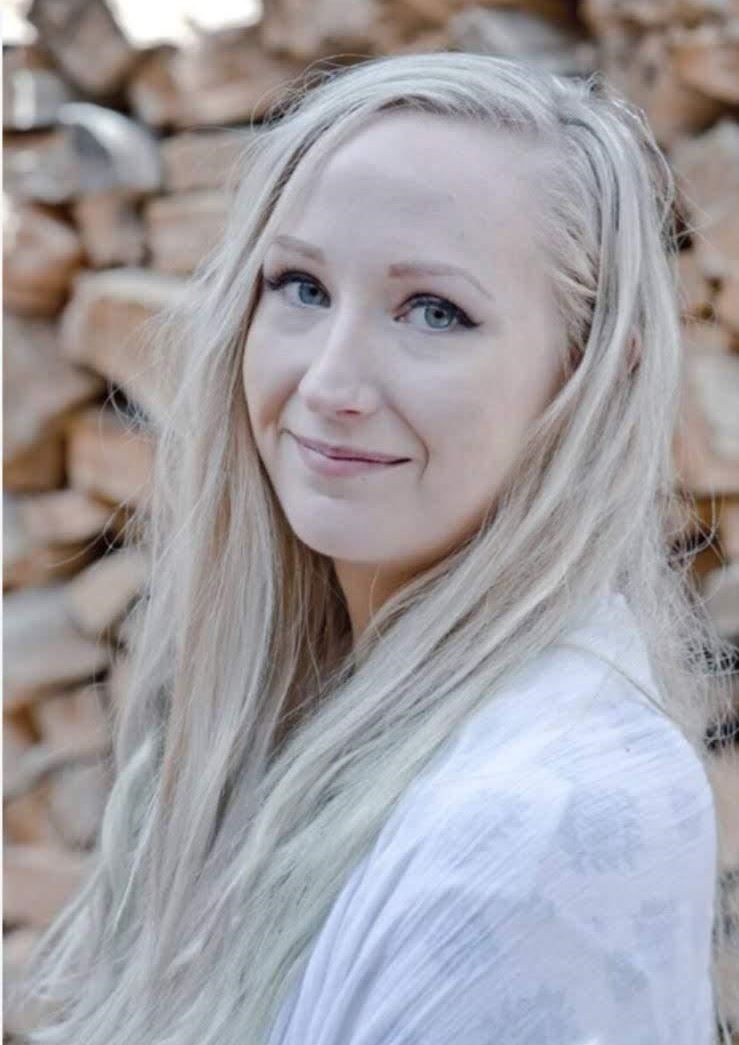 
See our calendar for updates

Cities Can Save Money and Help Clean Air with HB-411

One Thing You Can Do: Smarter Laundry