Looking Back on 2021 at Weber State

OGDEN, Utah – Weber State University’s emergence from the pandemic allowed for a return to more traditional campus life in fall 2021. Here is a look at WSU’s many highlights for the year, including a return to in-person events and performances, graduation ceremonies under the stadium lights and celebrating 50 years of the iconic Stewart Bell Tower.

Thanks to the efforts of a volunteer army, Weber State provided vaccinations and testing for thousands of members of the campus community, administering approximately 100,000 vaccine doses in the Dee Events Center from January to April. In addition, WSU volunteers helped keep the campus safe with testing centers at the WSU Ogden and Davis campuses for symptomatic and asymptomatic individuals, while also conducting robust contact tracing.

Named as Time Magazine’s 100 Most Influential People of 2020 for his work as a historian and leading antiracist scholar, Ibram Xolani Kendi, participated in a live-streamed interview for the campus community with WSU President Brad Mortensen. The conversation explored ideas for eliminating racial inequality. The event was hosted in honor of Martin Luther King Jr. Day.

In February, WSU also welcomed civil rights activist Ruby Bridges to speak virtually to campus about her experiences with segregation. Bridges was the first African-American child to attend the all-white William Frantz Elementary School in 1960.

More than 60 locally and nationally renowned speakers came together virtually for the 12th annual Intermountain Sustainability Summit. The summit covered a variety of topics including renewable energy and net-zero buildings. Participants also took part in hands-on workshops discussing climate change at a personal and community level.

To honor graduates of fall 2020 and spring and summer 2021, Weber State hosted in-person and virtual graduation ceremonies in Stewart Stadium. Each college held individual events to award degrees for more than 6,497 students — the largest class on record at WSU.

On the second of the two-day graduation events, the Dumke College of Health Professions and the Annie Taylor Dee School of Nursing celebrated the graduation of its first class of the Doctor of Nursing Practice (DNP). DNP is Weber State’s first doctoral program.

Major renovation began on the Wildcat Trail System, which also includes the popular Discovery Loop. The trail has been a staple of the Ogden community since 1977. University volunteers removed old exercise equipment along the trail, and Ogden City provided tools for heavy debris removal. The clean-up is part of a multi-year renovation effort.

The Lindquist Pops Concert, which attracts thousands of people each year, was welcomed back to campus after the 2020 hiatus. Attendees enjoyed a free symphonic concert and one of the largest fireworks displays in Utah. This tradition is proudly supported by John E. Lindquist, President of Lindquist Mortuaries and Cemeteries in Ogden.

Weber State University held a ribbon-cutting ceremony for the Haven J. Barlow Parkway at WSU Davis in Layton. The new entrance gives visitors a second way to access the campus. As part of the ceremony, Barlow, a primary driver in transitioning Weber State from a two-year college to a four-year institution and then a university, drove Weber State’s purple Tesla along the parkway.

The campus community enjoyed a return to in-person campus activities, which kicked off with the annual Block Party celebration. As Weber State returned to a more traditional fall schedule, students could choose from a variety of face-to-face, online and hybrid classes.

The Val A. Browning Center for the Performing Arts received major upgrades to make performances even more enjoyable for both patrons and performers. The Austad and Allred theaters received improvements, including the sound systems, stage, orchestra pit and floor. 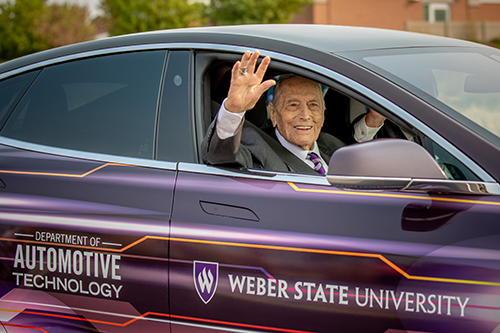 The Chronicle of Higher Education, named Weber State on its “2021 Great Colleges to Work For” Honor Roll. Weber joined a list of just 42 institutions around the country for the recognition.

Harry Gottlieb, CEO of Jackbox Games and founder of Unify America, visited Weber State to talk about his initiatives bridging political divides in the U.S. Attendees were invited to take part in the Unify Challenge, where participants across college campuses were paired with others holding a differing viewpoint and asked to engage in productive discussions.

Over 3,573 WSU graduates were honored during the 157th commencement ceremonies, recognizing students from summer and fall semesters. The most popular majors were nursing, professional sales, computer science, criminal justice and medical laboratory sciences.