OGDEN, Utah – Weber State University’s Office of the Provost will present the 2021 John S. Hinckley Fellow and the Exemplary Collaboration Award to faculty and staff who have supported the university’s mission of helping diverse learners receive a quality education, Nov. 11 at noon.

The campus community is invited to watch the official presentation at this link. To see as university Provost Ravi Krovi surprised the recipients with the news, click this link.

The recipient of the John S. Hinckley award, Matt Ondrus, has found math and tennis have a lot in common. He studied mathematics at Ripon College in Wisconsin where he played tennis for the college team. 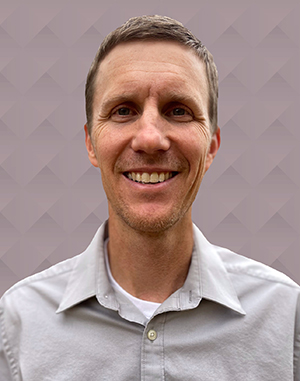 “I have a friend I've played, probably 20 times, in tennis. He is better than I am, and I've never beaten him. I came close — once, I was a point away,” Ondrus said. “I try to tell myself that someday I can solve that problem and figure out how to beat him. I want students to feel that way about math (though preferably with more success than I have in my tennis). It might be hard, but math problems can be solved with enough work. And the feeling you get when you solve a problem is pretty great.”

As a student, Ondus said he had the gift of caring professors who gave him “countless hours” and supported his interests in mathematics all the way from Ripon as an undergraduate to the University of Wisconsin–Madison for a Ph.D. to a postdoctoral teaching position at the University of Arizona, Tucson. In his postdoctoral position, he helped with a large National Science Foundation grant addressing mathematical teaching and learning for Latino/a students.

“It gave me chances to work with teachers, students, faculty and others who helped me to see that mathematical learning was much more than I thought it was,” Ondrus said.

When Ondrus joined the Weber State faculty in 2007, he brought a strong commitment to make math accessible and achievable for all students.

He serves as the advisor to math majors, but also co-chairs the Quantitative Literacy Task Force, which is focused on the math requirements for non-majors. The task force has helped identify concerns, challenges and successes to make improvements in general math education. Thanks in part to the recommendations of the committee, the math completion rate for first-year students has increased by 20% in the past six years. That’s important because students who complete math in their first year stay in school and graduate at a higher rate than those who do not.

To help improve the chance for student success in the university’s core math class, 1050, Ondrus also offers a one-week course before fall and spring semesters for students who took the prerequisite, but feel they need a refresher. He also assists with various aspects of Concurrent Enrollment math courses, which provide college-level credit to high school students. At the same time, he’s helped create a calculus curriculum that meets the needs of engineering and computer science students.

In his research, Ondrus focuses on the area of “Lie algebra representation theory,”  which studies symmetry, using an algebraic lens. He and research colleague Emilie Wiesner from Ithaca College in New York have written a number of papers on the topic, including “Whittaker modules for the Virasoso algebra,” which was published in the “Journal of Algebra,” in 2018. Their work generalized results known since the 1970s and is cited by other researchers.

Ondrus tells students, math is a gateway to interesting topics and rewarding careers. He wants to make sure they are ready to compete.

Even before broad testing was mandated, Sally Cantwell, school of nursing chair, and Matthew Nicholaou, medical laboratory sciences chair, set up a COVID-19 testing protocol. They worked with their teams to devise a system for testing symptomatic students, faculty and staff in a mock clinic, so when the state began requiring both symptomatic and asymptomatic testing, Weber State was ready.

To run the testing, they first solicited volunteers from the Dumke College of Health Professions, but then expanded across campus as the need grew. Eventually more than 450 Wildcat volunteers signed up and tested 17,000 individuals on both the Ogden and Layton campuses.

Another critical component of COVID containment at WSU was contact tracing. Associate professor of nursing Kathleen Cadman helped Mike Davies, WSU emergency manager, establish the protocols, work out the logistics and carry out contact tracing. Throughout the pandemic, the contact tracing team contacted and counseled more than 1,000 positive cases, 750 of whom had been on campus within 14 days. They also connected with 1,000 individuals on-campus who had been in contact with someone who had COVID.

Weber State has a long history of engaging with the community to prepare and react to emergencies, so in early January 2021, when Weber-Morgan Health needed a facility to host the community vaccination site, agreements were already in place to react quickly. In coordination with Public Safety Director Dane LeBlanc, nursing professors Valerie Gooder and London Draper Lowe helped the health department prepare for a mass vaccination clinic at the Dee Events Center.

Gooder and Draper Lowe trained, screened, credential-certified and enrolled more than 200 faculty, staff and students from the Dumke College to assist the Weber-Morgan Medical Reserve Corps. As volunteers, the group provided 50% or more of the staffing for the vaccination area at the Dee for six months, including for the days specifically planned and reserved for Weber State faculty, staff and students.

The clinic distributed nearly 100,000 doses of life-saving vaccines from January to June 2021.

“We were all witness to the Herculean efforts that our COVID-19 team took to keep our students, faculty, staff and the community protected,” wrote Yas Simonian, dean of the Dumke College of Health Professions in a nomination letter. “They accomplished this by great teamwork, sharing, collaboration, expertise, educating, communication, care and selfless giving.”