OGDEN, Utah – The Val A. Browning Center for the Performing Arts at Weber State University is undergoing some improvements that will make performances even more enjoyable for patrons and performers as it prepares to open its doors this fall.

Events at the venue were cancelled throughout 2020-21 due to the COVID-19 pandemic. This allowed the university to get a jump-start on new features and upgrades to enhance future shows. 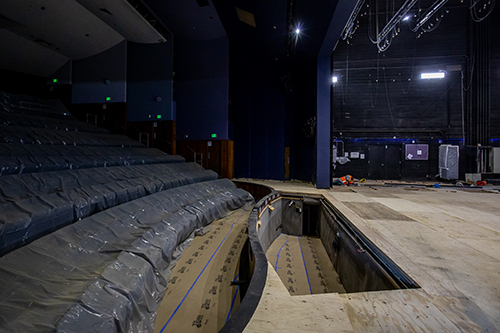 “A performing arts center is more than a building,” said Jim Craig, Browning Center director. “It’s a giant machine that allows us to support the fantastic performances we present.”

The Austad Auditorium and Allred Theater each received a sound-system upgrade. In Austad, a L-acoustics line-array system and an Avid VENUE S6L audio console were installed, which will provide a “significant upgrade that delivers even sound levels across the theater,” Craig said. Every seat in the house was analyzed and perfected for sound.

The Allred Theater is also getting a new floor and orchestra pit cover. Construction is scheduled to be finished during the first week of fall classes. The new “sprung floor” is soft enough to protect performers from injury and strong enough to hold heavy lights and set-construction equipment, Craig said. The orchestra pit cover has 21 individual platforms that can be removed to fit the needs of a given performance.

The Browning Center will also soon have a new recording studio, which will be sonically isolated from the rest of the building. Designed by Peter Gruinsen, the studio will have a control/mixing room and an isolation booth where performers will be recorded. The recording studio is the first phase of technology upgrades for the college’s new sound production and recording program. The minor will allow students hands-on and project-oriented courses to address the techniques, philosophy and artistry of sound production and recording.

In the second phase of renovations, the Roland Perry Recital Hall will be redesigned and renovated to provide a digital connection to the recording studio, allowing larger groups and performances to be recorded.

“This is another tool and part of the performing arts machine that we use to produce the best possible content and to teach our students with industry-standard technology,” Craig said. “Students will be working with the very best.”

Visitors to Weber State’s campus may also have noticed the ongoing construction of the Utah Transportation Authority’s Bus Rapid Transit (BRT) project in front of the Browning Center and Shepherd Student Union. Once the route is finished, concert and theatergoers will have a direct line from downtown Ogden to the front doors of the Browning Center. The Austad Auditorium can host audiences of up to 1,408, while the Allred Theater has 272 seats available for performances.

Deborah Uman, dean of the Telitha E. Lindquist College of Arts & Humanities, said the construction all around campus is a hopeful sign for students this fall.

“Last year, we focused on adapting and streaming our performances. This year, we will be celebrating our return to campus,” she said. “The renovations at the Browning will give our students places to share their talents on stage and to project their performances across time and space.”

Renovations to the Browning Center were made possible by donations from R.A.M.P., the Browning Foundation, Ray Kimber, state funding and the Lindquist College.

For more information about the college, visit weber.edu/arts-humanities.