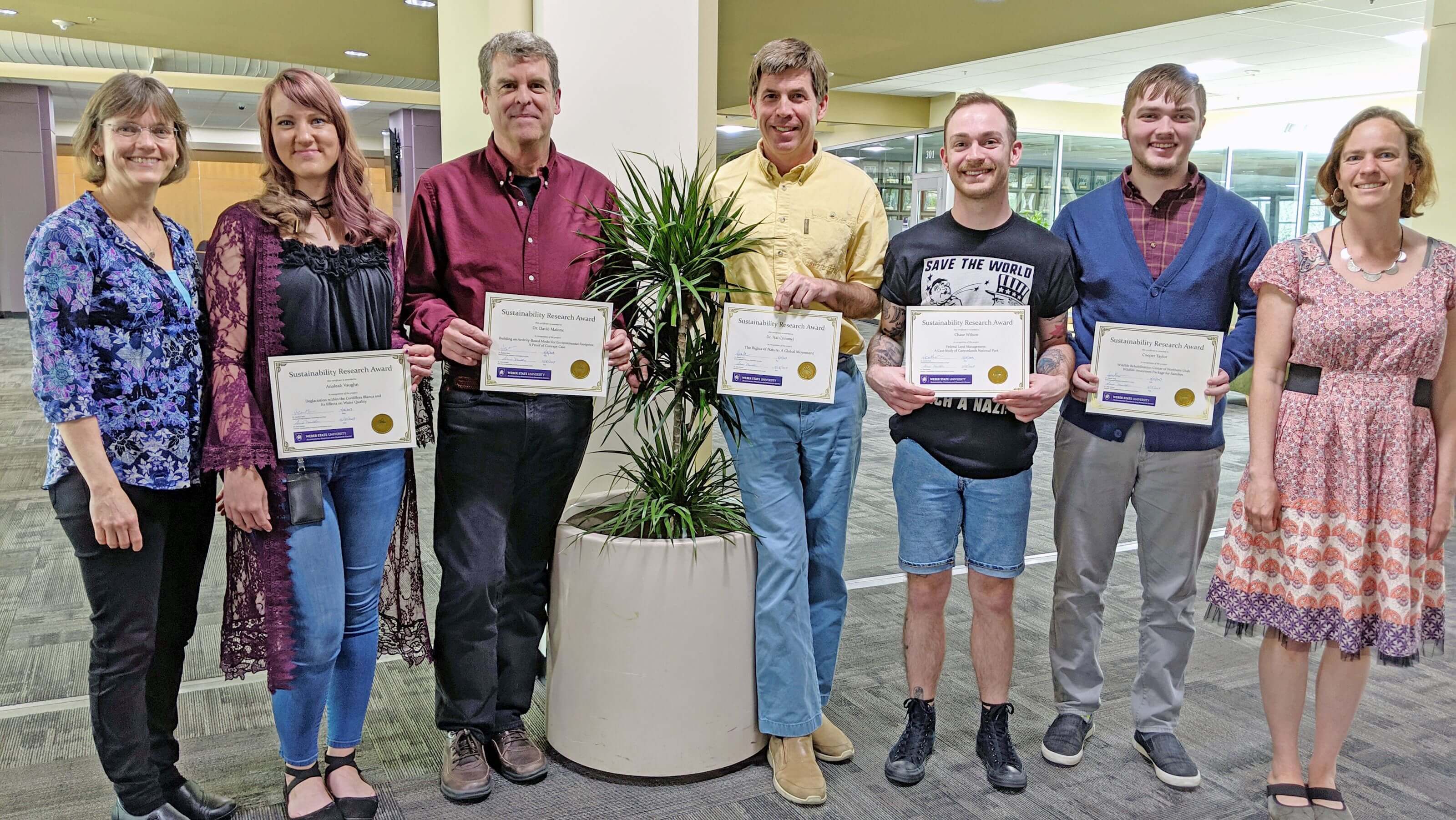 Sara Dant (History), "The View from the Top of the World: Climate Change in the West and the World"

Professor Dant's research uses the lens of a 12-day rafting trip in the Arctic National Wildlife Refuge to wrestle with a fundamental question: In a twenty-first century challenged by climate change, can we find balance between environment and economy? Professor Dant ultimately concludes that, "sustainability brought about by cooperation is essential to our survival."

Katelyn's project aims to test the theory that increased fuel prices decrease air pollution by using time-series data to determine the effect of fuel prices on air quality in Salt Lake City. A key implication of her analysis is the impact of carbon taxes on air pollution. Katie presented her research at the Utah Conference for Undergraduate Research.

Chase developed a software program that allows MasterCraft, a large recreational boat manufacturer, to simulate runtime of an electric boat. MasterCraft plans to use the software to help them find a supplier to help manufacture a fully electric boat. This will help mitigate the amount of toxins introduced into bodies of water and help preserve sea life.

Putting a price on not only the costs but also benefits of species preservation is challenging. As her abstract notes,

“The benefits of at-risk species preservation efforts are primarily nonmarket in nature and difficult to measure in monetary terms; they include both non-consumptive use values (e.g., wildlife watching) and nonuse values (the most problematic to measure). Many at-risk species are also recognized as indicators of broader ecosystem health and sustainability. The objective of this essay is twofold: (1) to review the valuation of species preservation, with the specific focus on empirical efforts to assign monetary values to the preservation of at-risk species.  Monetary valuation techniques can also be applied to the preservation of biodiversity more generally; and (2) to demonstrate how economists and policymakers can use prior meta-analyses of at-risk species in a benefits transfer. The pursuit of transparency in both cost and benefit estimates can inform public deliberations, help responsible public agencies justify their decisions (e.g., about the level of protection efforts, alteration of habitats, etc.), and demonstrate fiscal responsibility.”

Her essay is forthcoming in Oxford Encyclopedia of Environmental Economics, Oxford University Press.

The 2020 Solar Decathlon local build challenge was a collegiate competition sponsored by the Department of Energy to design and construct a net-positive home. Jeremy led the effort and with his students partnered with Ogden City, the Ogden Civic Action Network, and multiple departments and organizations on campus to design and build a 2450 square foot 6 bedroom, 3 bath home. The home was designed to produce all of its own energy usage annually, but also enough to charge an electric car to drive 20 miles per day. The home is all electric and uses off the shelf building materials and methods. The home is repeatable and has an energy cost to the owner of just over $100 annually. It truly proves that Net Zero design and construction are possible, but also that a Net Zero lifestyle is achievable in our back yards.  In spring 2021 this WSU project won first place in "Energy Performance" in the global decathlon competition!

A comprehensive website has been developed for anyone who desires to mimic the strategies implemented. Please see https://weber.edu/solardecathlon for a comprehensive package of videos, documentation, etc.

This work focused on how the widespread invasive grass, cheatgrass, becomes established and dominates sagebrush steppe ecosystems of the western United States.  Cheatgrass is of concern as it negatively impacts wildlife habitat, soil nutrient and water cycles, and provides fuels that increase wildfire frequency. In sagebrush steppe habitat, which already has enough cheatgrass to increase wildfire risk, biocrusts, communities of mosses, lichens, algae, and fungi, cover the soil between plants. This field-based research revealed livestock grazing can disrupt the biocrusts covering the soil surface to allow cheatgrass invasion. The research suggests that protecting biocrusts by reducing livestock grazing pressure and encouraging biocrust restoration can prevent cheatgrass invasion and the associated negative ecological impacts. This research was published in 2020 in Ecological Applications, a leading journal of the Ecological Society of America.

This project focused on iron deficiency, the most prevalent micronutrient deficiency worldwide, with an estimated two billion people affected. It is essential to find sustainable ways to reduce prevalence of iron deficiency, especially in areas that are disproportionately affected by this condition. The primary purpose of this research was to investigate ways to increase iron consumption within the established dietary practices of the Ghanaian population.  The conclusions of this research project were to increase consumption of plant-based proteins and fruits high in vitamin C, which is known to increase absorption of plant-based iron. These are more sustainable and accessible methods as they are readily available, cost-effective, and less environmentally intensive when compared to animal-protein sources.

This project considered contributions to the Urban Heat Island (UHI) effect, where urban areas are significantly hotter than their surrounding rural areas.  It is an effect that has been well documented for more than a century.  The built environment in a city generally reduces evapotranspiration and increases the amount of impervious surface compared to the surrounding rural area. In dryland environments, however, this is not necessarily the case – cities may be replacing bare dirt and rock with asphalt and concrete, and the thermal signatures can be very similar (Gluch et al., 2006). In arid environments, then, the influence of anthropogenic heat sources like vehicle and building emissions may be more influential. This study aims to examine the relationship between traffic volumes and the UHI effect in the area of Salt Lake City, Utah.

The project results show the temperature differences between the roadways and elsewhere are correlated with traffic volumes. Traffic heat emissions account for a sizable portion of the UHI, including in areas on the outskirts of the city that would not normally be included in an UHI study. In the future, further research on this effect in other cities and different climates could make the results more broadly applicable.

Hal Crimmel (English) for his edited book titled Utah’s Air Quality Issues: Problems and Solutions and his Weber State colleagues, Eric Ewert (Geography), Matt Gnagey (Economics), Therese Grijalva (Economics), Will Spiegle (Automotive Technology), and Mark Stevenson (Anthropology) who contributed chapters. The book attempts to explain issues and solutions that can make Utah more sustainable in terms of air quality's impact on human health and non-human nature. The book was published by University of Utah Press and available as of March 2, 2020.

Francois Giraud-Carrier (Supply Chain Management) for his research titled “Pollution Regulation of Competitive Markets.” The research finds that it is possible to control pollution without hurting businesses and the economy. The paper’s analytical results show that well-designed cap-and-trade regulation can actually improve firm profits while reducing the pollution damage; a win-win outcome. The article was published in the journal Management Science in 2019.

Van Jacobson’s project was his senior capstone research project completed in December 2019 which explores the nature of the Greater Sage Grouse’s population decline, the bird’s potential candidacy under the Threatened and Endangered Species Act, and the means with which states have attempted to preserve populations through policy. Jacobson’s research suggests that the tag-draw lottery hunting policy is not having the intended effect of preserving Greater Sage Grouse populations, and has provided insight on the effectiveness of a tag-draw hunting policy, and to what extent changes to the tag-draw hunting policy is required.

Katherine Meyr’s research involved analyzing water samples along the Taku watershed in Alaska and British Columbia to test for trace elements, including heavy metals associated with relevant mining contamination. The project integrates many on extremely important topics, such as hydrologic cycle, global climate changes, and the interaction between glaciers and rivers. Ultimately, Meyr’s research contributes to better understanding the changes in sub-arctic watershed hydrology caused by global climate change. Meyr presented this research in a poster at the Utah Conference for Undergraduate Research and was accepted to present at the GSA 2020 Rocky Mountain Section Meeting.

Hal Crimmel (English), “The Rights of Nature: A Global Movement”

Dr. Crimmel’s project is a documentary film exploring how the legal system in the industrialized world views nature as a wealth-generating resource and commodity whose only value is what it provides for humans. This is contrasted with indigenous communities who for millennia have viewed themselves as part of nature. This film has screened at university events, classrooms, NGO events, and national and international film festivals.

David Malone (School of Accounting and Taxation), “Building an Activity-Based Model for Environmental Footprint: A Proof of Concept Case.”

This project was a collaboration with Consortium for Advanced Management International (CAM-I) and included team members from Grant Thorton, Boeing and Pilbara Consulting. The goal was to construct an activity-based model to allocate the greenhouse gas effect to entity cost objects, with the mandate to develop tools in which entities may better measure environmental resource intensity in their operations. This work will be carried back to those organizations and will inform the way they approach strategic decisions on resource deployment.

Analeah Vaughn (Earth and Environmental Science), “Deglaciation within the Cordillera Blanca and its effects on water quality”

This project analyzed tropical glaciers in the Cordillera Blanca, of northern Peru. The project involved mapping multiple drainages to identify the extent of the mineralized zone and assess the control of bedrock geochemistry on water chemistry. This mapping will allow predictions about where water contamination may get worse as the glaciers continue to recede.

Chase’s project aims to understand federal land management in the American West with a particular focus on the historic relationships between people and public lands. His research used Canyonlands National Park as a case study, and highlighted the nonlinear path toward preservation and the impact of key individuals, local residents, and media cycles on the process of public lands changing administration.

Rachel Creer and Cooper Taylor worked with a community partner, Wildlife Rehabilitation Center of Northern Utah (WRCNU), to provide means to educate people about protecting Utah’s wildlife. The students created a pamphlet covering the mission of WRCNU, what to do if you find an injured animal and how one can volunteer. They also created a children’s activity booklet highlighting real stories of animals saved by the WRCNU.