OGDEN, Utah – Amid the many challenges of 2020, Weber State University worked to provide a high-quality, student-centered educational experience. Here is a look back at WSU’s many highlights in 2020,  including an inauguration, a new scholarship initiative, transitions and testing because of COVID, student achievements, community outreach efforts and commencement under the stadium lights. 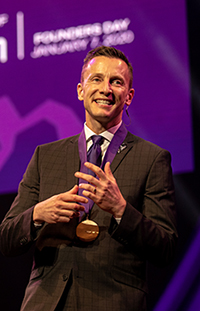 Ruth Carter, the 2019 Academy Award winner for Best Achievement in Costume Design for “Black Panther,” was featured as the Telitha E. Lindquist College of Arts & Humanities Hurst Artist-in-Residence. Carter spoke to students and the community about her career, which spans more than 30 years, designing costumes for film and TV. Carter also helped WSU students complete a costume-design challenge.

WSU’s Women’s Center celebrated its 40th anniversary, honoring a legacy of education, empowerment and advocacy for women and students. The center offers a variety of services that focus on social-justice education, leadership and engagement. It also provides a variety of scholarships to help students complete their degrees.

On March 12, in response to the COVID-19 global pandemic, Weber State University announced the remainder of spring semester would be held in a virtual format. In just a matter of days, the WSU Online team helped all WSU faculty move their courses online. In addition, faculty and staff worked to adjust to the new environment and calm student fears. 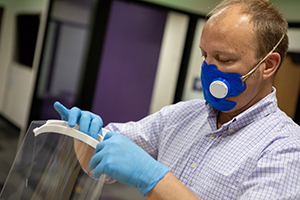 The WSU community stepped in to help Utah’s healthcare system in the fight against COVID-19 by donating medical supplies and creating 3D-printed face shields. The Dr. Ezekiel R. Dumke College of Health Professions provided ventilators and personal protective equipment (PPE) to local hospitals and clinics, and the John B. Goddard School of Business & Economics spearheaded 3D printing of face shields for the community.

An entire group of WSU students was accepted into the prestigious Carnegie Mellon University (CMU) graduate program for information security and information management. Five WSU cybersecurity students entered the master’s program in the fall, and nine participated in the summer internship. CMU’s program is ranked No. 1 in the nation with an average acceptance rate of less than 20 percent.

Weber State announced a new bachelor’s degree in environmental science for students interested in tackling the tough issues facing our planet. Students in the College of Science can take relevant courses in botany, chemistry, zoology and more, using not only state-of-the-art laboratories on campus, but also natural outdoor laboratories such as Utah’s mountains and the Great Salt Lake.

Ahead of the fall semester, Weber State University President Brad Mortensen joined 160 higher education presidents and chancellors for the ALL IN Campus Democracy Challenge. The program presented colleges with the goal of reaching 100% voter registration and participation in all elections for college students. In conjunction with the challenge, WSU’s Political Engagement Coalition hosted the “Weber State Votes,” an initiative to achieve 100% voter participation for all its students. The initiatives were ongoing, through the election season.

Weber State University announced the selection of Deborah Uman as new dean of the Telitha E. Lindquist College of Arts & Humanities where she will oversee nearly 2,700 students, faculty and staff in five departments: communication, English, Foreign Languages, performing arts and visual art & design as well as the Browning Center and the Kimball Visual Arts Center. Uman will take on her new role beginning January 2021.

Weber State University hosted its spring 2020 commencement ceremony Aug. 29 in Stewart Stadium. The August celebration was held on the football field to allow for adherence to COVID-19 restrictions, and all attendees were required to wear masks. The traditional ceremony in April was postponed due to the pandemic.

WSU celebrated the grand opening of the new Computer & Automotive Engineering Building at WSU Davis in Layton, which opened to classes beginning fall semester 2020. The 51,000 square-foot building will help the College of Engineering, Applied Science & Technology address the explosive demand for additional workforce in Northern Utah.

Weber State students bested 18 other national and international teams to win this year’s national supply chain management competition. In the past five years, Weber State has advanced to the finals four times, but 2020 is WSU’s first national championship in the competition. The General Motors/Wayne State University Mike Ilitch School of Business Supply Chain Case Competition is now in its 10th year and attracts the nation’s top-ranked programs.

Despite the many challenges posed by a pandemic, total enrollment for Weber State University remained steady for fall 2020. According to the annual third-week fall headcount, the total number of students at Weber State stands at 29,596 compared to 29,644 in fall 2019, which was a record year.

WSU hosted Utah’s largest Red Cross community blood drive in a decade, in collaboration with the American Red Cross of Utah, local businesses, civic and religious organizations. The goal of the drive was 1,000 donations, which made it the largest Red Cross community drive in Utah in 10 years. Donations help provide lifesaving blood to 2,500 hospitals across the country, including 45 local area hospitals in Utah. 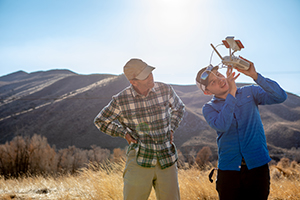 A soon-to-be Weber State graduate has identified an ideal location in northern Utah for a wildlife overpass, which if built would eliminate a death trap for deer, elk and moose along a stretch of Interstate 84, making the road safer for motorists. For his senior thesis, geography major Timber Erickson examined potential locations in Davis, Weber, Morgan, Cache, Summit and Rich counties for a wildlife overpass similar to the one built in Parleys Canyon in 2018.