OGDEN, Utah –  A soon-to-be Weber State University graduate has identified an ideal location in northern Utah for a wildlife overpass, which if built would eliminate a death trap for deer, elk, and moose along a stretch of Interstate 84, making the road safer for motorists. 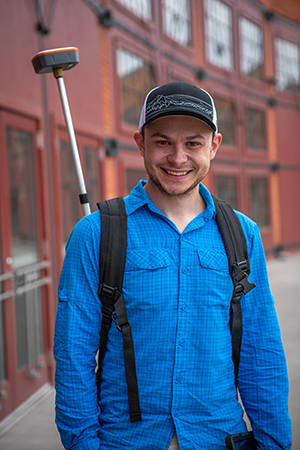 For his senior thesis, geography major Timber Erickson examined potential locations in Davis, Weber, Morgan, Cache, Summit and Rich counties for a wildlife overpass similar to the one built in Parleys Canyon in 2018. Since its construction, the Parleys overpass has drawn significant wildlife traffic away from Interstate 80, preventing car collisions with animals in the area. There has already been similar research on this issue in northern Utah, Erickson said, but it hasn’t been extensive across his region of focus.

Drawing upon the skills he learned while earning Weber State’s advanced certificate in geospatial analysis, Erickson mapped the areas where deer, elk, and moose are most frequently hit by cars, using roadkill data from the Utah Department of Natural Resources (DNR). He overlaid this map with another map of the animals’ habitats, also provided by DNR, to find habitat areas that are fragmented by major roads.

Erickson’s approach yielded a short list of three potential locations for a wildlife overpass: one that’s two miles southeast of Henefer on I-84 in Summit County; another at the interchange of I-80 and I-84 at the mouth of Echo Canyon, not far from the Henefer site; and a third near the city of Morgan, in Morgan County.

After assessing these sites using a drone and other tools, as documented in this video, Erickson concluded that the best location is the one southeast of Henefer, near Leonards Canyon. He ruled out the Morgan site due to building challenges presented by the terrain.

“At the site near Henefer, the building area was most suitable, and it was also the highest need area,” Erickson. “It was overwhelmingly the most important area in my research.”

Finding a place that’s ideal for construction and for wildlife shows the value of this kind of research, Erickson said — but those aren’t the only benefits. The average person’s insurance claim for a deer collision is $3,400, he said. Using the DNR roadkill data, which covers a recent three-year period, Erickson estimated that there were 353 car collisions with deer, elk and moose near the Henefer site, totaling at least $1.2 million in insurance claims.

Though he submitted his thesis at the end of November, Erickson plans to continue work on the project for several years. Now that he’s identified a location, he is working on publishing his research in a scientific journal, sharing the results with several government entities that would need to approve the overpass, and collaborating with Dorsey and other Weber State advisors to explore raising private funds for the project.

For Erickson, it’s been a long road to complete his thesis and graduate in December. You might say he’s been working on it since before he was in kindergarten.

“I’ve loved geography and maps since I was 4 years old,” Erickson said. “My parents bought me my first world atlas when I was like 6, and I used it so much that the bindings and the book fell apart. They had to buy me one every year.” 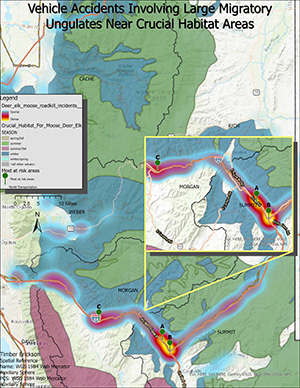 When his interest in atlases developed, his parents bought him the real thing, even though they were well beyond his age level because “they don’t make little kid atlas books, or they didn’t then,” said his mom, Amy Erickson.

“We thought that was interesting — that such a young boy was studying all about the world,” she said. “And it wasn't just simple geography. It was statistics, it was major rivers and the countries they were flowing through. He was just fascinated with it.”

When he got older and was starting to consider his career, he wasn’t sure what to pursue, Amy said. His parents encouraged him to think back to the interests he had as a child. Taking their advice, he started investigating cartography in high school, which led him to Weber State, not far from his hometown of Evanston, Wyoming.

“I saw that Weber State had a really established technical geography program with cartography, or map skills, and geospatial data,” he said. This sealed the deal in his choice to attend — and he’s glad he did.

“Weber State gave me the tools to do what I envisioned,” he said.

In addition to completing his thesis, Erickson will be starting a full-time job as a specialist in geographic information systems with the city of Evanston when he graduates, after working part time for the city for several years.

“Every parent wishes that their child can actually have a career in something that they truly enjoy and that truly matters to them,” Amy said. “We’re really proud of him.”