After taking a ride on the new OGX Wildcat Shuttle, Cox and Mortensen had a conversation discussing the challenges and opportunities presented by Utah’s ever-growing population. The conversation was hosted by WSU’s Olene S. Walker Institute of Politics & Public Service. 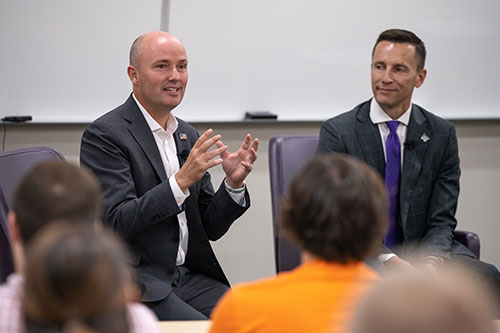 “This conversation matters so much because population density without proper infrastructure lowers quality of life,” Cox said during the discussion. “How you handle the growth of a population can make it a good thing or a bad thing.”

Also in attendance were WSU students, faculty and staff who submitted questions for a Q&A after the discussion. Attendees asked about Utah’s air quality, student loans, homelessness and the protection of birth control in the state.

“I think sometimes students get overlooked in politics, so I’m glad Gov. Cox was able to come and hear from students, especially Weber State students,” said Isaac Eck, who is studying political science. “He took his time with everyone and his answers were very well thought out.”

Eck said he attended the event because of the changes he has noticed at Weber State.

“Like Utah, Weber State is changing a lot with a new transit line and new buildings. It’s getting bigger and expanding,” Eck said. “So it was great hearing from our governor on those topics specifically.”