The first day Cory Britton tried to enroll at Weber State University, fear kept him in his truck. This week, at 42, he will proudly join nearly 6,500 other graduates as he picks up his diploma in computer science.

A first-generation college graduate, Britton and his family are still astounded at the accomplishment and transformation of a student who walked away from high school at the beginning of 11th grade. 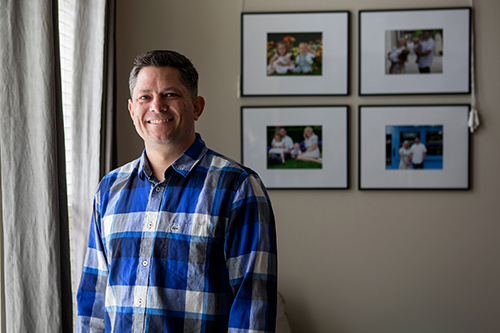 To say he was shy as a teenager is an understatement. Britton remembers he completed his homework assignments but left them unsubmitted in his backpack because he preferred that to having a teacher or a classmate see that he hadn’t done well.

Failing many of his classes, Britton decided he should drop out of high school to follow his father into a career in construction and property management. He made good money, but didn’t have a passion for the profession.

At 37, recently married and with a baby on the way, Britton wanted to be a different role model and provider. Thanks to open-enrollment admission at Weber State, he applied and was accepted. He drove to campus from his home in Riverton to register for classes.

“I sat in my truck for the hour, and I was too terrified and too scared and too embarrassed to go inside that building,” Britton remembers of that October day in 2016. “The time came and went where I could have gone in. Instead, I drove back home.”

The next day, which happened to be Halloween, Britton mustered his courage, and with his wife’s support, returned to try again.

“I just put my head down and walked in,” Britton said. “The great thing was some of the guidance counselors were dressed up. You know, when you're doing public speaking and they say, ‘Picture everybody naked’? It was kind of like that. When they were all dressed in costumes, I thought, ‘Oh my gosh, these guys look fun.’ It really helped ease my fears.”

Britton said registration turned out to be the hardest moment he faced at the university, followed closely by the first day of class. He was afraid to be “that old guy” among all the recent high school graduates. He managed to stifle the worry by sitting in the front row and not looking behind him to see any of his classmates. Finally, the second week of class, he had to hand a paper back down the row and found the woman sitting there was a non-traditional student. He learned she was a single mother, also wanting to improve her family.

“And that’s the moment I was like, ‘Oh my gosh. I am not alone,’” Britton said with a laugh. “I ended up making some really great friendships, and I didn’t see that one coming.”

As a husband, father and a non-traditional student, Britton took his education seriously. He knew he had a lot of educational ground to make up. At Weber State he took advantage of tutors and talked to professors. They nurtured his potential, despite the doubts he had in classes such as Advanced SQL Database.

“I took the introduction to databases two years earlier, and I seemed to forget everything,” Britton said. “But my professor said, you're going to be fine. We'll get through it together. He showed me I did know stuff. I just needed to calm down.” 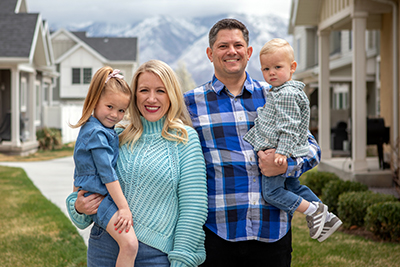 “Once I got to college, the possibilities were eye opening,” he said. “There is so much that anybody can do. It's not just Einstein or the smartest people out there who can go and do all this great stuff. Anybody can do it if they put their mind to it.”

Britton was also surprised to be engaged by subjects he had previously had little interest in. During his first semester, as a general education credit, he enrolled in an introductory music course.

“I was just shocked that I would like something like that,” he said. “It was just fun to talk about how music influenced the culture of America. Music is what built a lot of American and who we are today. That was such a fun class.”

Who Americans are today has changed significantly since Britton enrolled at Weber State. The culture, the country, this graduating class, will always be viewed through the lens of a pandemic. Britton said the transition to virtual coursework came at a good time for him. In his advanced computer science courses, he always found easy access to professors through Zoom or email.

And transitioning to virtual classes eliminated his 40-minute commute, which gave him more time for homework, his job, wife Karin and two young children.

“I've just been at home and had either virtual lectures or online courses, which have been great,” Britton said. “I don’t feel my education has suffered at all because of the pandemic.”

The Monday after graduation, Britton will transition from his position as a software development intern to a full-time software engineer at Veracity Networks in Linden, Utah. It’s a job he loves and something he’s been planning and looking forward to since he started as an intern in June of 2019.

“I went from construction to being a software engineer. That's a pretty big step,” Britton said. “I was talking to my dad the other night, and he was like, ‘I never thought this would ever be possible. You just decided to go chase your dreams. And you actually did it.’”

Weber State University will honor Britton and all 6,497 graduates — the largest class on record  — during multiple graduation events, both in person and virtually on April 29, 30 and May 1.

Additional details are available at weber.edu/commencement.