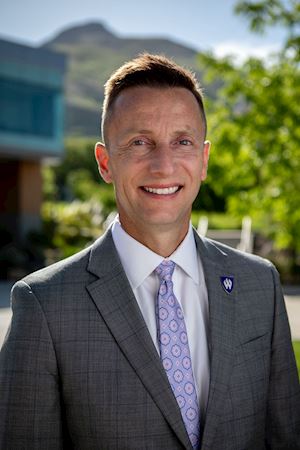 Brad L. Mortensen became the 13th president of Weber State University in January 2019, after serving in several leadership positions at WSU since 2004. He began his tenure as president with a call to action for the Weber State family to become louder and prouder about the university.

Since then, Brad has celebrated numerous accomplishments with campus partners, including establishing a new strategic plan, expanding community partnerships and economic engagement initiatives, and helping WSU maintain and achieve top rankings in multiple areas, including student affordability and return on investment.

Brad guides Weber State’s efforts to be a leader in transforming lives by meeting all students where they are, challenging and guiding them to meet their goals both academically and in life. This includes expanding access as an open enrollment university, increasing retention and completion rates, providing personalized and innovative learning experiences and striving to become an Emerging Hispanic Serving Institution.

He believes it is his primary role to unlock the creative potential within everyone in the Weber State community, and to guide the university in being an institution that is continually learning and improving.

A first-generation college graduate, Brad holds several degrees, including a doctoral degree in educational leadership and policy from the University of Utah.

Connect with Brad on Social Media