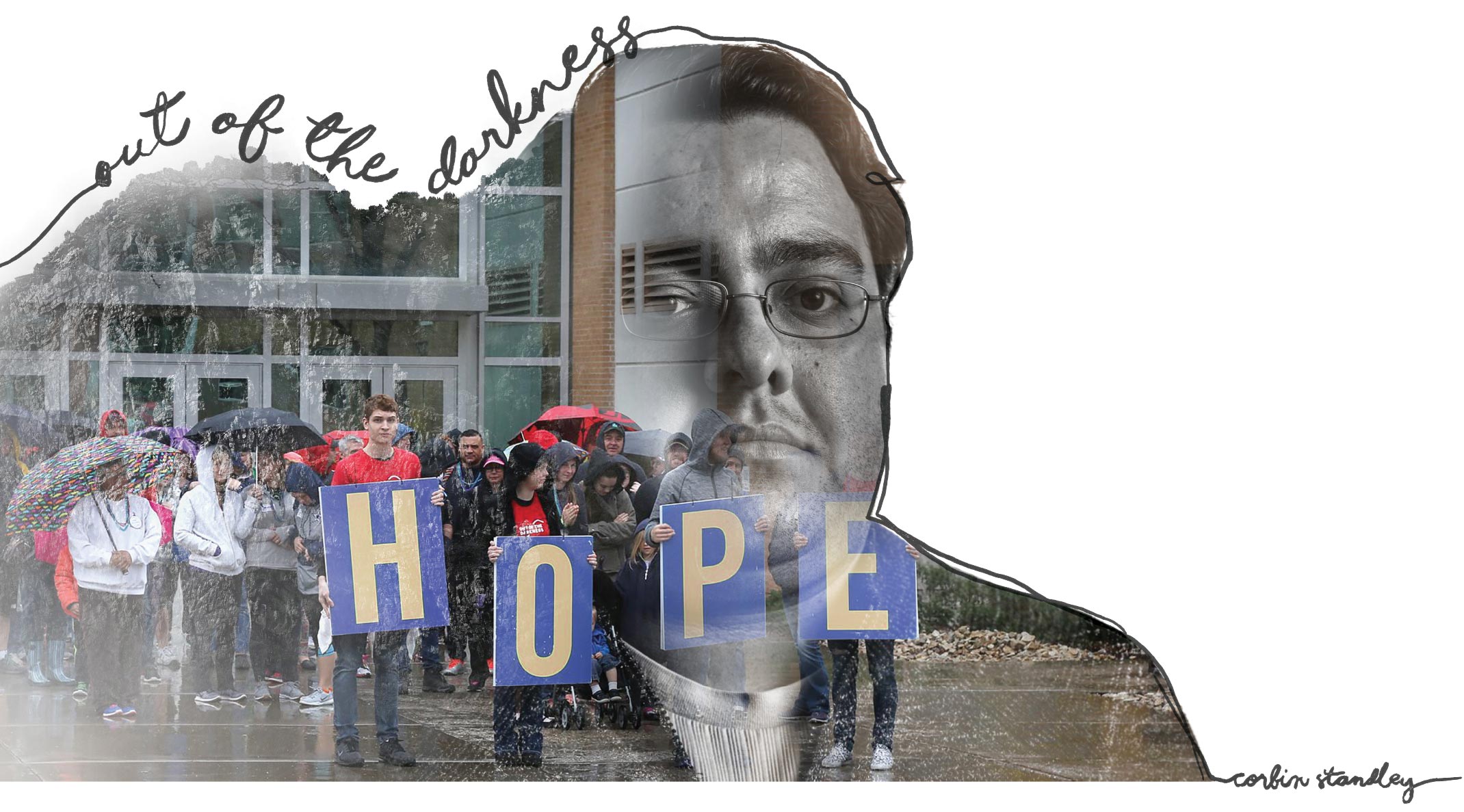 Out of the Darkness

A global pandemic means mental health care is more important than ever.

Corbin Standley BS ’15 lost his older brother, David, to suicide in June 2010, setting his life on a different course as he headed into his senior year of high school.

To help Standley process his loss, he sought a better understanding of mental health by taking an AP psychology course, and later enrolled in the psychology program at Weber State.

As he wandered the booths at a suicide prevention walk in Salt Lake City in 2012, one table in particular caught his attention. A volunteer with the American Foundation for Suicide Prevention (AFSP) was handing out flyers about campus Out of the Darkness Walks — the first he had heard of such an event. Standley soon reached out to Taryn Hiatt, the area director for AFSP, about starting campus suicide prevention walks on Weber State’s campus.

If anyone else was dealing with depression or losing a loved one to suicide, as he had during one of the most formative years of his life, he wanted to connect them with support and resources by bringing the community and campus together.

“I wanted to build awareness and support, while letting people know they’re not alone,” said Standley, who is now a doctoral student at Michigan State University whose work focuses on social and community issues related to suicide.

In 2020, a suicide prevention walk in November was virtual due to the pandemic. The walk was led by WSU Student Association mental health advocates, Carly Ferrin and Samuel Strong, who went live on Instagram to encourage other students to walk with loved ones to promote positive mental health by exercising outside with other people.

Those events have attracted others who have lost loved ones or dealt with depression themselves, including Bret Alexander BS ’19, former student body president and current grad student and new student orientation program advisor for the Student Success Center.

Like Standley, Alexander lost someone to suicide as a teenager. 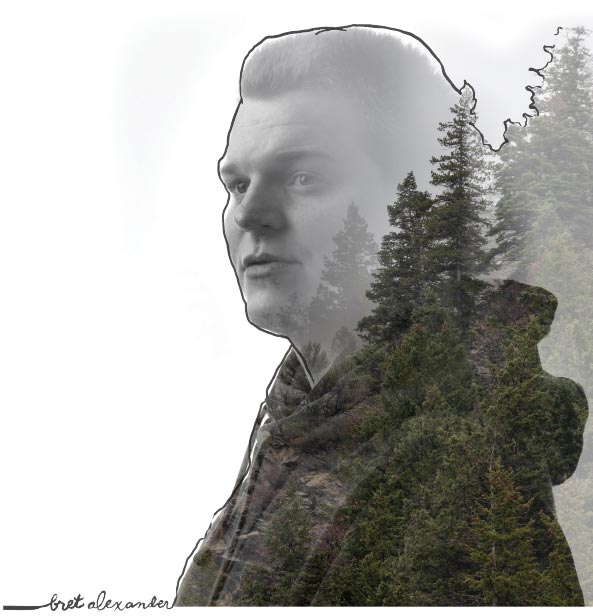 A boy he was in a relationship with died by suicide when Alexander was 19, prompting him to realize a couple of things. First, knowing that LGBTQ youth often face unique stressors that lead to higher rates of suicide, he committed to fully stepping into his identity as a gay man. Second, he was going to spread hope to others who might find themselves in a situation where they felt they had no hope. Alexander has spoken at suicide prevention events on campus, and still carries around a small rock he painted at one event that says “High hopes.”

“If you pull it out of your pocket, hopefully it pushes you a little bit, or at least one more day.” he said.

Mental health is a struggle for many even in the best of times, and 2020 has featured a global pandemic, economic downturn and a contentious presidential election, exacerbating depression and anxiety for many people. At Weber State’s Counseling & Psychological Services Center, many people are seeking services directly related to effects from the pandemic, said Dr. Aaron Jeffrey, associate director of clinical services. Financial stress, family stress or difficulty coping with changes brought about by COVID-19 are all reasons people are seeking help, Jeffrey said.

“I think we all have a coping buffer, and that’s just kind of been whittled away with earthquakes and racial tension and all of this stuff,” Jeffrey said. “And now with Covid, people just don’t have this buffer anymore. What they used to be able to roll with, now just pushes them over the edge. A lot of people who previously may not have sought services come in and reach out to us now.”

Despite the extra stressors people have experienced this year, Jeffrey said that the actual number of people seeking help at the counseling center has diminished somewhat — which worries him.

“In the early stages of the pandemic, as we transitioned to teletherapy, we had about half our usual demand,” Jeffrey said. “At the end of fall 2020 semester, we had about two-thirds the usual number of clients, but are almost on par with the typical number of sessions provided.”

While he knows the mental health struggles are out there, he says some people may not have been comfortable with the virtual and tele-mental-health services offered during the fall 2020 semester, or they’re so burned out from dealing with everything else that even making an attempt to connect with services is too much.

Many mental health issues first manifest between the ages of 18 and 25, Jeffrey said, right when many people are in college. Add that to the transition from high school to college and the stress of keeping up with classes, jobs and other responsibilities, and biological and environmental factors create the perfect storm.

Isolation is another factor that the pandemic has increased that can affect mental health, said Amy Blunck, the coordinator of mental health initiatives for Counseling & Psychological Services Center. With many people working or taking classes from home, it can make it easier not to check in with family and friends about how they're doing.

Utah has had higher suicide rates than the nation as a whole consistently for the last decade, and suicide is the leading cause of preventable death in Utah. It accounts for more than 600 deaths a year — and thousands more attempts, according to the Utah Department of Health. Though Utah’s suicide rates have mostly held stable during the pandemic, rates of seeking help have gone up, Hiatt said. “Covid leveled the playing field,” Hiatt said. “Everybody’s struggling.”

Treatment and support is available for anyone in the WSU community struggling with depression, anxiety or other mental health issues.

Support can range from calling the National Suicide Prevention lifeline to visiting your primary care physician for an assessment. The important thing, Hiatt said, is that you find someone who takes you seriously.

Seeking support from peers on campus is another option. Blunck oversees health initiatives on campus, including a program of peer-based mental health support groups. Students have to take a class before leading a support group, such as the virtual anxiety toolbox. Since there is still a stigma around seeking mental health services, Blunck said some students who would be averse to seeking help from a therapist or counselor are more open to sharing with fellow students. Options including group, individual, couple and family therapy are also available through the Counseling & Psychological Services Center.

For those who aren’t current students, the counseling center’s website has a variety of useful mental health information, videos, apps, screening tools and crisis resources.

If there’s a silver lining to the pandemic it’s that people are talking about mental health more than ever.

“It emphasizes our need to connect with others. It emphasizes the need to know we aren’t alone, we’re not alone in those struggles,” Standley said.

Students can schedule a free appointment at 801-626-6406 or weber.edu/counselingcenter. Caring staff will help direct you to the best treatment option for you.

Find resources to maintain health and wellness of your body and mind. Learn more at weber.edu/studentwellness, or contact them at 801-626-7524 or studentwellness@weber.edu.

This coalition works to prevent suicide and increase suicide awareness in northern Utah. Visit nuhopeutah.org for information on resources, support groups and more.

Whether you’ve lost someone to suicide or are in crisis and considering it yourself, you’ll find a plethora of resources at liveonutah.org.