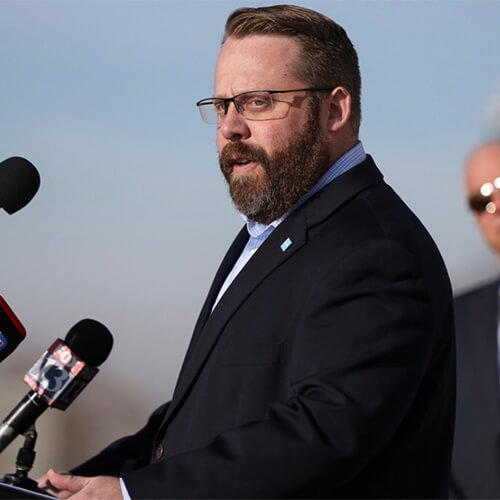 Thom Carter was named the second Executive Director for the Utah Clean Air Partnership in October of 2017. UCAIR is a non-profit organization established to bring communities together with one goal in mind –improving Utah’s air. Thom has a diverse background, including work in the political and policy arena alongside international experience in professional sports.

Born in Salt Lake City, Utah; Carter spent his childhood in New Hampshire and youth in New Jersey, graduating from Montgomery High School, in Montgomery, NJ.  After serving a mission in California for the Church of Jesus Christ of Latter-day Saints.  Carter attended Brigham Young University in Provo, Utah earning a degree in English. While at BYU he served as a Student Body Officer.

His career has taken him all over the country and world; with focus on policy, politics and fundraising as well as professional sports management.  In the policy world, he worked in Ohio, Tennessee, Washington DC, and New Jersey. Carter served as an elected official while in New Jersey.

His professional sports background includes working in the minor league baseball system of the Arizona Diamondbacks in Montana and California.  He also spent close to four years growing Major League Baseball’s operations in Australia.  He was the CEO/GM ofthe Canberra Cavalry of the Australian Baseball League (a MLB affiliated winter league), leading them to an ABL Championship.  Under his leadership the Cavalry were the first Australian team to win the Asia Series.

Carter is an avid reader and sports fan.Growing up in the Northeast, he has a great love for all New England sports teams (Red Sox, Celtics, Patriots, and Bruins) and also cheers for the Los Angeles Dodgers due to his Grandmother’s and Father’s love for the Brooklyn Dodgers.  He hopes the BYU Football team can return to their former glory and enjoys attending BYU sporting events.

Thom married the former Andrea Mayo in April of 2018.

Now at UCAIR, Thom sits on the Board of Governors for the Salt Lake Chamber, the Governor’s Energy Advisory Council and Co-Chairs the Healthy Salt Lake Steering Committee. Thom works diligently to bring partners together for collective impact in addressing Utah’s air quality challenges.