OGDEN, Utah – An unlikely YouTube star got his start when he decided to enhance his Weber State University automotive classes with video.

Professor John Kelly wanted his students to have a better view of the complex procedures he was conducting on automotive parts, both large and small.

In 2004, he began videotaping the process. He stored the videos on portable hard drives, which he carried from class to class and plugged into a computer to project on a large screen, but the transport was burdensome, and hard drives are prone to damage if bumped or dropped. 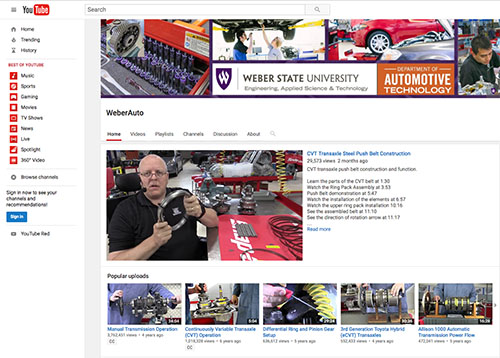 When YouTube offered a free place to share video, Kelly became an early adopter.  What he didn’t realize was just how popular his detailed automotive instruction would become.

The Weber Automotive YouTube channel has nearly 50,000 subscribers. Views have surpassed the 10-million mark, with an equivalent watch time of almost 104 years. According to YouTube analytics, Kelly’s videos have been seen in nearly every country on the planet.

“It’s just taken off like crazy. I can’t believe it. That wasn’t my intention, but that’s just how it turned out,” Kelly said, laughing. “I have received comments, phone calls and messages from people all over the world — people who are using my training videos in their own automotive programs and people who are do-it-yourselfers who want to repair their own vehicles.”

Kelly said he’s “accidentally” become a teacher to the world. Students and technicians follow him to brush up for exams and certifications. Other instructors use the videos to enhance their own teaching.

Sophomore Jaxson Mortensen is now in Kelly’s Automatic Manual Drivetrain course. But he began learning from Kelly when he watched YouTube in high school. At the auto shop where he currently works, the master technician uses the videos for training.

“They are just really informative,” Mortensen said. “I’ve always been big into cars. They are really interesting to me. He has a way of explaining things to me, so I understand them, and they make sense.”

All that fame doesn’t buy Kelly any extra credibility at home. “My children laugh,” he said. “They just see me as Dad, and someone who shouldn’t even be on YouTube.”

Occasionally, over the years, he’s had some negative comments from viewers, which he used to take quite personally. Now Kelly responds simply, “Thank you for your feedback.” That humble comeback disarms critics. “Almost always they write back and say, ‘Oh I’m sorry I was grumpy that night — or whatever.’ I am really surprised at how quickly a person’s opinion changes when I give a little bit of feedback.”

Kelly has produced approximately 150 videos. They range in length from 5 minutes to two hours. Topics include the “CVT transaxle push belt construction and function,” published two months ago, which already has 26,630 views; or “ZF 8HP 8 Speed Automatic Transmission,” published last year, with 43,098 views.

“I get comments from people who realize it takes more than five minutes to do some repair job, and if you really want to know how to do it, these videos show the step-by-step process. This is not the Disney Channel,” Kelly said with a chuckle.

Faithful viewers have noted changes as the years have gone by. Kelly wears a mic for better audio. He uses two high-resolution cameras for better picture quality and additional angles. And, Kelly, who has muscular dystrophy, now delivers his lectures from a wheelchair.

“This has turned into my hobby for me. Being in a wheelchair for the past three years limits my hobbies,” Kelly said. “My co-workers, when they see me early and late and on Saturdays, say, ‘You sure spend a lot of time here.’ And I say, ‘Well, I’m having fun. This is what I do for fun.’”

A lot of fun, and a lot of work. Kelly determines the topics, sets up and operates the cameras remotely while he is lecturing, adds titles and edits everything himself.

He has no shortage of topics. Vehicles change every year, and regulations in the past five years have demanded dramatic improvement from the auto industry.

“Today’s vehicles get much better fuel economy, have much cleaner exhaust emissions and are much safer than even a vehicle five years ago,” Kelly said.

But, even with improved safety regulations, Kelly said drivers should take a number of precautions right now to prepare for winter roads.

Kelly has been instructive automotive classes for 26 years. When he’s not teaching or producing videos, he’s taking classes or watching training programs himself.

“I attend hands-on training classes from the different vehicle manufactures every year,” Kelly said. “Plus manufacturers have web-based training courses on their vehicles and systems, which I keep up on. I probably watch 100-150 hours of training programs a year. As a trainer, I have to keep up on all the manufacturers, which makes my responsibility more challenging.”

The reward for Kelly is that his students have no problem finding jobs after graduation.

“There is a huge shortage of qualified technicians,” he said. “We don’t have enough students for the jobs that are out there. The obvious benefit to the community is these students leave much better prepared to handle the high-tech challenges they will face with modern vehicles.”

The Weber State automotive technology program offers a variety of certificates as well as associate and bachelor’s degree options. It is the only automotive program in the state with a four-year degree, which qualifies graduates for management positions, field engineering, field service testing and technical instruction.