OGDEN, Utah – The inauguration of Brad L. Mortensen as 13th president of Weber State University will take place on WSU Founders Day, Jan. 7, 2020, at 1:30 p.m. in the Val A. Browning Center Austad Auditorium.

The community is invited to the inauguration celebration, where President Mortensen will outline his vision for the university. 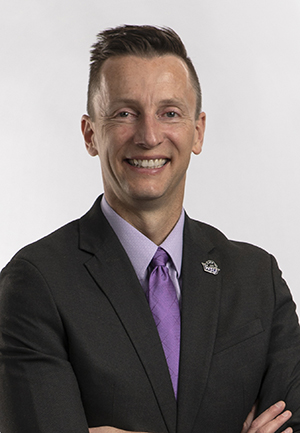 The program will also feature brief remarks from faculty, staff, student and government leaders as well as distinguished alumni. WSU students and alumni will perform a selection of musical numbers. An informal reception will follow in the lobby of the Browning Center.

“Founders Day marks the day Weber State proudly celebrates its history as an institution going back to 1889,” Mortensen said. “As president, I want the world to know who we are, what we stand for, and how well we’ve helped students turn dreams into reality for 131 years. No one connects with, challenges and inspires students better than Weber State University.”

The Utah State Board of Regents announced Mortensen’s selection as 13th president on Dec. 6, 2018. He assumed all duties and responsibilities associated with the presidency on Jan. 1, 2019.

Well-known and respected in higher education, business and government circles throughout Utah, Mortensen is a valued member of several community organizations. He is a former chair of the Ogden-Weber Chamber of Commerce and United Way of Northern Utah. In 2018, Utah Business magazine recognized him as its CXO of the Year, which is bestowed annually on senior executives who demonstrate strong financial leadership, visionary innovation as well as social responsibility to Utah businesses.

Prior to his tenure at Weber State, Mortensen served in a number of professional capacities within the Utah System of Higher Education, the Utah Office of the Governor, and the Arizona Legislature.

Mortensen and his wife, Camille, are the parents of four children.

On Jan. 7, 1889, Weber Stake Academy, a Church of Jesus Christ of Latter-day Saints-owned preparatory school in Ogden, Utah, opened its doors to area youth. In the autumn of 1888, local politician, businessman and church leader Lewis W. Shurtliff organized the Weber Stake Board of Education for the purpose of establishing the school. Shurtliff directed the eight-member governing body and Louis F. Moench, a German-born educator who had previously supervised schools in Ogden City and Weber County, was asked to serve as the new school’s principal. Two years later in 1891, when a lack of funding threatened construction of a larger building to accommodate the school’s burgeoning enrollment, each board member mortgaged his home and personal property to provide financial backing. Through the years and against all odds, Weber survived devastating financial and political struggles to evolve from a tiny religious academy with 98 students crowded inside a borrowed chapel, into a vibrant, state-owned, dual-mission university operating in state-of-the-art facilities on multiple campuses.

Weber State University is an open-admission institution with a fall 2019 enrollment of 29,644 students from some of the most ethnically and economically diverse cities in Utah. The university cultivates remarkably personalized teaching, mentoring and engaged learning with seven colleges, 225 undergraduate certificate and degree programs and 16 graduate degrees, including a Doctor of Nursing Practice. In addition to being a learning institution, the university is a community leader. Weber State makes Utah a better place to live through community building, volunteer service, economic development, access to the arts, cultural events and NCAA Division I athletics.