OGDEN, Utah – Before attending Weber State University, Derek Jensen struggled with his transition out of the military.

Jensen enlisted in the U.S. Air Force fresh out of high school. He served in active duty for seven years and was deployed twice to the United Arab Emirates, where he worked aboard an airborne warning and control system as the military's eyes in the sky. He monitored airspace and detected possible threats from enemy aircraft in real time. 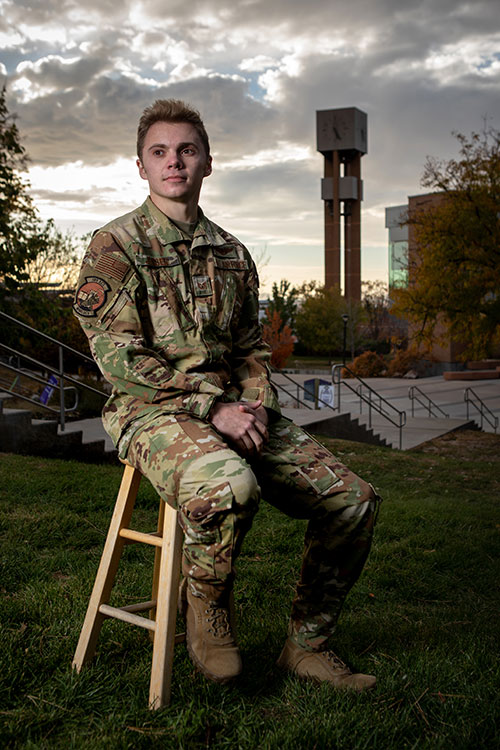 In 2021, after nearly a decade of military service, Jensen moved back home to Brigham City with a choice to make: try for a promotion in the Air Force or make a life change.

“I knew I would miss the military, but it came down to me knowing that I would regret never trying to go to college,” Jensen said.

After applying to several universities in Utah, Jensen ultimately enrolled at Weber State University. He was first impressed with Weber State’s mechanical engineering program and small class sizes, but he quickly grew to appreciate the campus and Ogden area.

“When I was applying to other universities, I just wasn’t getting the vibe I wanted,” he said. “Other schools had really big class sizes and my commute would have been over an hour. I just didn’t want to do that.”

In order to enroll in school, Jensen went from a full-time career in the Air Force to joining the Air National Guard, a part-time military career that requires members to work a minimum of one weekend a month and two weeks per year. Jensen continues air tracking in the 109th Air Control Squadron, part of the 151st Air Refueling Wing in Salt Lake City.

“Going from full-time military to civilian was one of the hardest parts of starting school,” Jensen said. “The military was so structured, but in college everything was up to me. Veterans Upward Bound really helped with that challenge.”

Jensen first enrolled at VUB when he needed tutoring in one of his physics classes, but he quickly found connection with other students there because of their shared military experience.

“It’s cool having a community where everyone is a veteran and we can talk about the things we’re struggling with,” Jensen said.

Although he had a later start with higher education, Jensen has made the most of his time at WSU by participating in different areas of campus life. He’s part of the snowboarding and gardening clubs, and he’s found academic success in areas he struggled with previously.

“I was so nervous to be taking calculus and English classes,” he said. “I hadn’t written a college-level paper before, but my professor Sarah Vause was amazing. She not only helped me pass her class, but she helped me actually care about the things I was learning.”

Jensen plans to graduate with a bachelor’s degree in mechanical engineering in 2025. After getting his bachelor’s, he wants to attend graduate school and work toward employment at the NASA space program or work in the aerospace industry designing rockets.

“I reached a summit in the military,” Jensen said. “Once I hold that degree in my hand and know this step is done, then I can start climbing a new summit.”