Utah Second District Court judge Cristina Ortega BS ’98 thought she had botched the most important interview of her career.

After completing the complex application, background check and personal statement, interviewing with a judicial nominating commission and with staff in the governor’s office, she finally sat down for her virtual meeting with Gov. Spencer Cox. Then her laptop stopped working. Thinking quickly, Ortega switched to her iPad in time for the interview. Then absolutely nothing happened for 20 minutes. 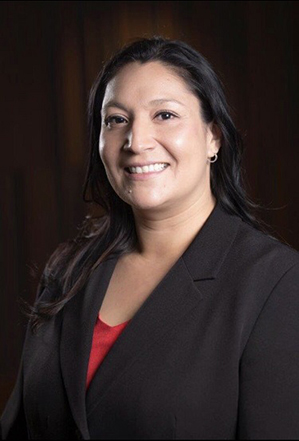 “I thought, ‘Oh, they’re testing me. They’re watching me to see if I can wait patiently and remain composed.’ So, I just smiled the whole time,’” Ortega recalled.

Afterward, she closed her iPad and thought of some choice words to release the frustration she was holding in. Luckily, she didn’t say them aloud and quickly realized she forgot to click the button to exit the meeting.

“I heard some shuffling and I thought, ‘Oh no!’ I opened the cover of my iPad and the governor is sitting there smiling with his staff,” she recalled. “I thought, ‘Do they think I’m spying? I’m not spying!’”

As she searched the screen for a way to sign out of the meeting, she was pretty sure she would not get the position.

Not long after, the governor called with good news.

Ortega apologized for the blunder, but she said Cox let her know that those types of errors were common, and that she would soon be the answer to a trivia question as his first judicial pick.

“From her undergraduate and law school days to her legal career, Cristina Ortega has a track record of excellence,” Cox said in a statement released in February 2021. “Her experience as a prosecutor coupled with her experience serving on many community boards shows her devotion to public service. I know she’ll be a dedicated and valued member of the Second District Court bench.”

It didn’t take long for work to come in for Ortega. “I’m the new judge, and went straight into presiding over three jury trials,” she said.

She earned her Juris Doctor degree from the University of Utah and her bachelor’s degree in criminal justice with minors in legal studies and Latin American studies from Weber State University.

As a first-generation Wildcat, Ortega says she discovered her “tribe” on campus and learned that her perspective, and her history, matters.

Finding a Home at Weber State

Though Utah now has a large, growing Hispanic/Latinx population, Ortega remembers when it was very low. “If you saw somebody else, you’d freak out,” she said “Oh, my gosh! They look like us.” 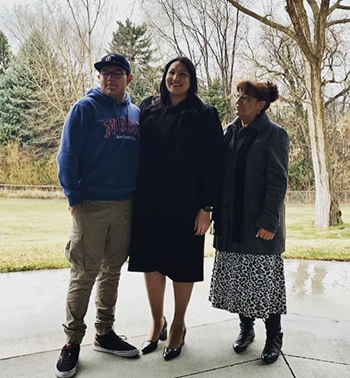 She was raised in a single-parent home by her mother. While they spent her early childhood in Juarez, Mexico, and El Paso, Texas, the company her mother worked for eventually relocated to Utah and they followed. Ortega and her mother moved around a bit once in the state, but soon found a permanent home in Clearfield, Utah.

With little English knowledge, she enrolled in South Clearfield Elementary during first grade. While she eventually picked up the language, she continued struggling with complex sentences, making it difficult to recite historic U.S. documents in fifth or sixth grade.

“My mom couldn’t tell me ‘You’re saying the words right,’” Ortega recalled about the experience. “I had nobody.”

At Clearfield High School, she began thinking about her future and the fact no one in her family had attended college.

“I had a few cousins who had graduated from high school, but that’s really all there was,” she said.

When one of her teachers handed out applications for Early College, a Weber State program allowing high school students to complete college courses that also counted toward high-school graduation, he skipped over Ortega’s desk. “It made me really upset,” she recalled. “Do you not see me as college material?’ Someone left it on their desk, so I took it. I filled out the application, I got into the program, and I thought, ‘This is my make it or break it moment.’”

Ortega was not only admitted, she excelled in Early College during her senior year. After high school, a new world opened to her.

“I came here to Weber State, and it was the most life-transforming experience,” she said. “I kind of made Weber State my home.”

At Weber, Ortega was able to commute from Clearfield while completing her studies and connecting with other Hispanic/Latinx students who had shared many similar experiences. She became involved with MEChA (Movimiento Estudiantil Chicanx de Aztlán), and served a term as Hispanic Senator in the WSU Student Association.

While planning classes, she met former Academic Advising director Ned Laff, whose laid-back personality put Ortega at ease. When Laff asked Ortega about her career goals, she told him something she had been keeping to herself for quite a while. “I said ‘I want to be a lawyer, I want to go to law school, I want to be a judge,’” Ortega recalled. “I thought he was just going to say ‘Child, take it down a notch,’ but he actually looked at me, and I felt he was looking right through me; he said ‘You totally do not see yourself there. It’s coming out of your mouth, but I really don’t think you believe it can happen. It can totally happen.’”

Ortega switched from being an English major to a criminal justice major. She recalls having fun conducting mock trials in Frank Guliuzza’s class and being inspired by another woman in law, faculty member Michelle Heward, whom Gov. Gary Herbert appointed to serve on the juvenile court of the Second Judicial District in 2010.

In her Chicano history course, Ortega learned about her cultural background and helped present to local elementary schools on Mexican-American history and entering college.

After graduating from Weber, she worked in youth corrections before entering law school at the University of Utah. She often tells her teenage son about her experiences as he prepares for college.

“I kind of feel like I’ve taken that huge generational leap for my family,” she said. “I tell my son ‘High school is the best, but I’m telling you, college is amazing. You learn so much about yourself.’”

Reconnecting and Words of Advice

Throughout the years, Ortega has reconnected with WSU.

Serving on the Board of Regents for the Utah System of Higher Education, she attended many WSU events. Now working at the District Court in Ogden, she’s continually reminded of WSU. “I’m literally down the hill from where everything changed for me,” she said.

Ortega also makes an effort to attend lectures on campus, and attended those by civil rights activist Dolores Huerta, and Ron Stallworth, an African-American detective in the Colorado Springs Police Department who famously infiltrated the Ku Klux Klan.

She previously served on the Board of Trustees for the University of Utah and on the Advisory Board for Big Brothers Big Sisters of Utah.

Ortega loves passing on her knowledge to the next generation, especially Hispanic/Latinx youth. In the past, she’s done this through Utah Center for Legal Inclusion, which pairs attorneys with students for mentoring, and she recently gave a homecoming address at her alma mater Clearfield High School, where her son attends school

“When I was done, I had maybe a handful of girls come up to me and say ‘Can I ask you questions?’ ‘I want to be a lawyer,’ ‘I want to be a judge,’ ‘I’m interested in criminal justice,’” she recalls. 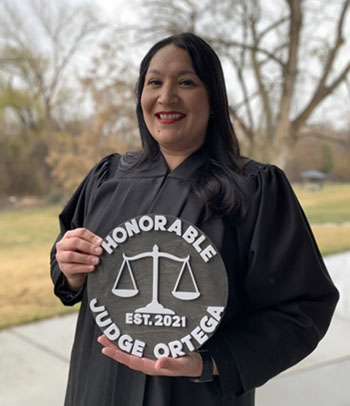 n her office, she has a sign that she created with a quote she often passes on to women, young and old, who seek out her advice, or are in need of encouragement: “Don’t underestimate what you bring to the table, because your perspective matters.”

Ortega says the quote has strong meaning for Hispanic/Latinx women.

“Look at our history. Look at where we’ve come from,” she said. “Your perspective, your experience, your struggle; it matters.”

Weber State University is proud to honor Judge Cristina Ortega as part of the “Women of Weber” project, which focuses on extraordinary women whose service, accomplishments, careers and philanthropy have enriched lives and educational experiences at the university. Each month throughout the academic year, one woman’s photos and stories are displayed outside Archives on the first floor of the Stewart Library.

The project was an outgrowth of a collaboration with Weber State Archives, Special Collections and the Museums at Union Station called “Beyond Suffrage: A Century of Northern Utah Women Making History.” The project was a commemoration of the 100th anniversary of women’s right to vote in 2020. Although the pandemic put a hold on the celebration, it did not dampen the enthusiasm to share the stories of outstanding women who changed lives.