Butler’s arrival at Weber State comes after a lifetime of hard work in a sport she didn’t have much respect for when she was an athletic young gymnast at age 8.

“I was like, ‘There's no way I would ever do cheerleading, it's just pom poms, and a bunch of cheers.’ That’s not for me,” she remembers thinking, until the day she watched a cheer team practice across the gym. “I was like, ‘Hmm, okay, that doesn't really look like the cheerleading I had thought about.’ So, I gave it a try, and a week later I quit gymnastics and moved straight into cheerleading, and I just fell in love with it from that very day.”

Her combination of talent, hard work and charisma led to a number of social media and TV appearances, beginning at age 12 when she created instructional cheerleading videos for YouTube. She was a star of the YouTube series “Cheerleaders,” and was profiled by ABC Nightline in a feature on the pressures of competitive cheerleading.

In 2019, Butler was recruited to Navarro College in Corsicana, Texas, a junior college recognized nationally for its cheer program. While there, her reputation and recognition skyrocketed through the popular Netflix series “Cheer.” The six-part series, which aired January 2020, highlighted Butler as Navarro prepared for college nationals. When first approached about the concept, Butler was reluctant to commit.

“I didn't know if I wanted to put my life out there like that because you have to be very vulnerable,” she admits.

In the end, she trusted producer Greg Whiteley enough to allow crews to follow her constantly for weeks on end, capturing all the good and bad along the way. She thinks it was the vulnerability and authenticity that propelled the show’s popularity and helped build her social media brand. Sometimes she’s shocked to realize she now has 1.8 million Instagram followers and an equal number of TikTok subscribers.

“Half the time, on the show, I was either crying or I was hurt or I was, like, just going through a hard time, and people were like, ‘Wow, we have so much more respect for you now that you showed us that side of you.’ I think that's the best part of it, people got to see how I actually was, versus the social media aspect.” 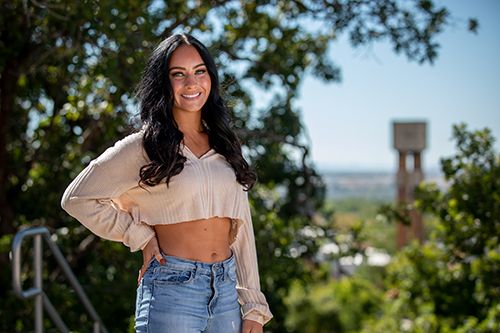 The show’s tension came partly from the competition between two top Texas teams, Navarro and Trinity Valley College. They had claimed national victories many times. But at the 2021 college nationals held each spring in Daytona Beach, Florida, it was the Wildcats, from Ogden, Utah, that came away with the Grand National Title, the highest score for the entire competition across all divisions.

The victory attracted recruits from all over the country, even internationally, to try out for the Spirit Squad, which includes both Weber State’s dance and cheer teams. Butler was one of nearly 100 hopefuls.

“The talent here is just like on another level of insane,” she said. “It's almost like you're watching an action movie and all these crazy things are happening. It's like the Avengers, literally.”

Butler’s teammate, Elsa Hassett, who ranked No. 1 in partner stunts at the 2021 national championship, says she thought the team was “ridiculously talented” last year, but this year it’s “10 times more talented” with the same intense work ethic. She says Butler fits right in.

“Gabi is awesome. She is so sweet, super, super humble, and she’s extremely talented — obviously — but to be honest, it’s just like having another teammate,” Hassett says. “She doesn’t act like she’s super famous and stuff. I genuinely love being around her. She is so positive and roots for everyone and is really good at lifting people up and giving them confidence, and I really love that about her.”

Butler is a flyer, one of the cheerleaders on the top of any stunt. Recognized and respected for her flexibility, Butler’s favorite stunts are a handski, where she balances upside down on one hand while someone holds her in the air, and a backhandspring with a double twist. Making the moves look effortless takes time and trust.

With the choice of top teams around the country, it was more than Wildcat talent that influenced Butler’s decision to settle in Ogden. It was the character of her team members.

“I loved the way the team was off the mat,” she explains. “They were humble and kind and very, very sweet. And I was like, ‘That seems like my type of people. I want to go there.’ So I did, and I love, I absolutely love, everything about it. I think it was one of the best decisions I ever made.”

Butler, who was inspired by coach and Spirit Squad advisor Summer Willis, plans to end her cheer career as a Wildcat with Willis, unless she gets the opportunity to continue and compete at the Olympics. It’s a tantalizing possibility, since cheerleading was approved as an Olympic sport in August. But for now Butler is grateful to be coached by Willis with her national reputation and positive energy. 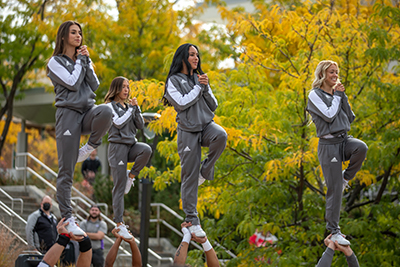 “She doesn't just care about you as an athlete, she cares about you as a person,” Butler said. “It's amazing. It feels nice for someone to care that much.”

No matter what, Butler said she will always be a cheer ambassador.

“Gabi, along with all of our squad members, has a great platform to make a difference and the ability to influence and lift up others,” Willis said. “They are all ambassadors for a sport that creates champions on and off the mat.”

Butler and Wildcat team member Kollin Cockrell held cheer camps in 10 states this summer, promoting the athleticism and intricacy of the sport. While she teaches, she also shares her message of positive self-worth.

“You're in control of everything. You're in control of your happiness, your emotions and your life,” she tells young people when they come to her for advice. “If you have a good mindset, and you just keep looking forward and focus, there's nothing that you cannot do.”

One of the delights Butler has found in northern Utah is the beauty of the mountains. Her home is nestled in the foothills north of campus, and when she’s not in the gym or in class, she runs the trails to clear her mind and build her stamina. She wants all the energy possible to cheer for the Weber State community she’s come to love.

“I used to not like game day at all, but at Weber State, the games are genuinely so much fun. I actually enjoy cheering at the games,” she said. “We get a crowd, and they love our energy, so let's give it back to them. I am so, so proud to be a Wildcat.”

For video, visit this link.