OGDEN, Utah – More than a decade ago, a student presented Weber State University associate respiratory therapy professor Lisa Trujillo with this heartfelt request: “Please come to my village in Ghana and teach.” She went. Today, 20 trips later, Trujillo has been successful in helping the University of Ghana implement a Bachelor of Science in Respiratory Therapy degree program. It is the first of its kind in Ghana and, to Trujillo’s knowledge, the first of its kind in Africa. 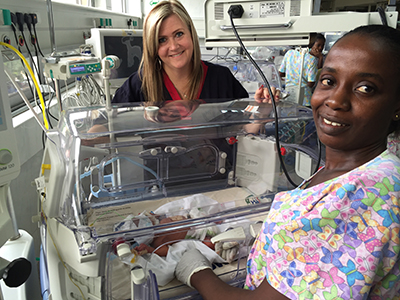 For her efforts in helping Ghana implement the degree program, Trujillo received the International Council for Respiratory Care’s Toshihiko Koga, MD International Medal. The honor recognizes an individual for excellence in promoting the globalization of quality respiratory care.

“Receiving the medal was very humbling,” Trujillo said. “It’s an award that absolutely needs to be shared. The bachelor’s degree program in Ghana was the result of the work of many, many people. I’m not one who likes to be on the stage or behind a microphone. In fact, I try hard not to be that person. I’m just Lisa. I’m not any more special than others in my field. I just happened to walk through doors that led me to opportunities, and those opportunities grew and grew and grew.”

In the fall of 2016, an inaugural group of eight Ghanaian students began courses at the University of Ghana’s School of Biomedical and Allied Health Sciences to become registered respiratory therapists. “These students are pioneers,” Trujillo said. “They’re trying to become something they’ve never seen.”

The new degree program is expected to be a pilot program for other institutions in Ghana and a model for the introduction of respiratory therapy in other developing countries.

In 2011, Trujillo visited Korle Bu Teaching Hospital in Ghana, where she introduced the prospect of a degree program to the CEO and the anesthesiology and pulmonology departments. “We discussed how the respiratory therapy specialty would be a great value to the country,” she said. “We talked about the impact it could make on their health care teams and what they would be able to provide to their patients.” 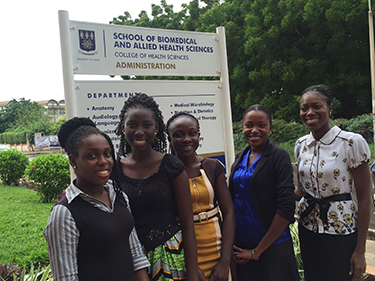 From there, she and her colleagues worked with the hospital, the University of Ghana and a number of government entities to start formally creating the program.

In 2013, a team of individuals, including Trujillo and Paul Eberle, WSU’s respiratory therapy department chair, developed the curriculum. It is patterned after Weber State’s. Officials from Ghana visited WSU’s Dr. Ezekiel R. Dumke College of Health Professions to study how its respiratory therapy program is structured.

“They decided that, rather than teaching to what resources they have in Ghana, they would teach to the expectation of the profession in the United States,” Trujillo explained. “They still want their therapists to have the same foundational knowledge that our Weber State students get, despite lacking some of the resources we have.”

Students at the University of Ghana will earn a traditional bachelor’s degree in four years, with respiratory therapy courses beginning in the second year. Current students took their general education courses last year and have just begun their respiratory therapy curriculum. Trujillo hopes that students will be able to visit Weber State between their third and fourth year in the program.

“Because they have limited access to resources, we would like the students to come to Weber State to spend time in the lab and have a clinical experience,” Trujillo said. “We want them to see the things they’ve learned about but maybe haven’t had a chance to put their hands on yet. We want them to see how respiratory therapists are an integral part of the health care team.”

Currently, the Ghanaian students stay connected with Trujillo through a private Facebook group she created.

“They were all so excited to be a part of this initial cohort,” Trujillo said. Their comments on Facebook support that statement. One student posted that the cohort was made of “RT (respiratory therapy) legends.” Another posted, “We’ve come a long way. This is awesome!”

An Eye-Opening Experience for WSU Students 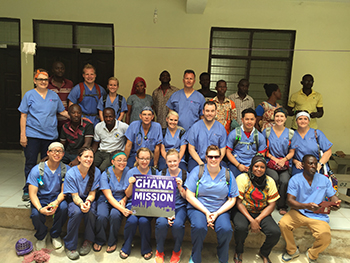 While many of Trujillo’s trips to Ghana have centered on the degree program, she also has traveled to the country with Weber State students to give them valuable study abroad experiences. And they’re not just respiratory therapy students.

“Many come from health sciences, of course, such as respiratory therapy, nursing, medical laboratory sciences and dental hygiene, but I’ve also taken students from education, marketing, business and general education,” she explained.

“It’s a life-altering experience,” Trujillo said. “Our students feel the humidity. They get to know the people. They see poverty. We treated one patient who had been burned at his workplace but had never been properly treated. In eight months, the wound hadn’t healed. It’s very eye opening. I had one student who, after returning from Ghana, had to go to an orientation at a hospital. She sat in this world-class American facility and cried, thinking how vastly different it was for patients in Ghana.”

Today, Trujillo is still in contact with the student who first asked her to come to his village. His name is Albert Ncancer. After attending Weber State for his prerequisites, he was accepted into a cardiopulmonary program in the United Kingdom, which was closer to his family in Ghana. His brother, Opoku “Yaw” Agyemang, graduated with honors from Weber State’s Bachelor of Science in Respiratory Therapy program in 2014 and is a current student in WSU’s brand new Master of Science in Respiratory Therapy program.

“I remember meeting their mother in the beginning,” Trujillo said. “Several years later, I took her a special gift and told her that all of our work throughout the country, all of our successes, started with her. Had she not raised her boys to work hard and get an education — which is rare in a country where many children don’t go past primary school — this new bachelor’s degree program might not have ever existed. I am truly grateful to her.”