OGDEN, Utah - Ten party guests. One dead body. Will the cast of SOMETHING’S AFOOT at Weber State University solve the gruesome murder mystery and escape a booby-trapped mansion before the clock runs out? 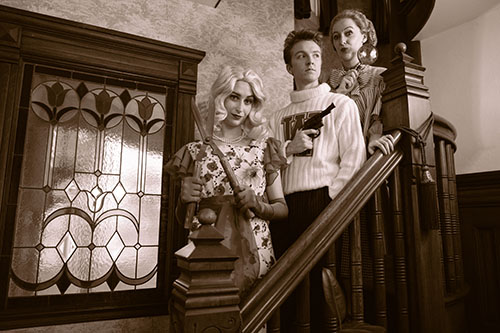 “SOMETHING’S AFOOT lovingly pokes fun at the murder mystery genre and musical theatre,” says director and WSU theatre professor Andrew Barratt Lewis. “We chose this show to open our season because it’s an overall laugh-fest - we wanted to work on something light, fun and funny as we return to in-person performance.”

The cast of ten WSU student performers and production crew of more than 50 students, faculty and staff present the musical whodunnit on the Allred Theatre in the Val A Browning Center for the Performing Arts. Not only will SOMETHING’S AFOOT be the first in-person theatre production in the building since the start of the pandemic, it will also be the first event to use the Allred Theater’s newly installed sound system and stage floor.

Like all good mysteries, SOMETHING’S AFOOT takes place on a dark and stormy night in a mysterious British manor. Ten unsuspecting guests are invited to a dinner party, only to find out that the host is dead. Someone (or something) is causing the visitors to die one by one in surprising, and often hilarious, ways. It’s up to the remaining guests to sleuth out who the murderer is and stop the madness before it’s too late. Audience members can expect witty banter, showstopping musical numbers and carefully timed special effects to bring the show to life… and the characters to their deaths.

“This show is a love letter to the cozy murder-mystery genre,” says Lindquist College marketing manager Cassie Smith, noting the ways SOMETHING’S AFOOT satirically plays with and subverts classic genre tropes and characters. “Think of it as the live theatre equivalent to curling up with a detective novel on a rainy day.”

The book, music, and lyrics of SOMETHING’S AFOOT were written by James McDonald, David Vos, and Robert Gerlach, with additional music by Ed Linderman. SOMETHING’S AFOOT is presented by arrangement with Concord Theatricals.

Promotional Photographs can be found here.

Promotional Video can be found here.

About the Telitha E. Lindquist College of Arts & Humanities

The Weber State University Telitha E. Lindquist College of Arts and Humanities teaches students to excel as they seek, understand, question and express complexities critical to the experience of being human. Community events highlight student talent and allow audiences to engage with professionals in the industries we teach.