OGDEN, Utah – Following a year of planning, construction and landscaping, Weber State University will host the ribbon-cutting ceremony for an all-electric home constructed in central Ogden, a project that was selected as one of 10 finalists in the Department of Energy Solar Decathlon. The short program will be streamed live on Weber State’s Facebook page, Oct. 13 at 4 p.m. 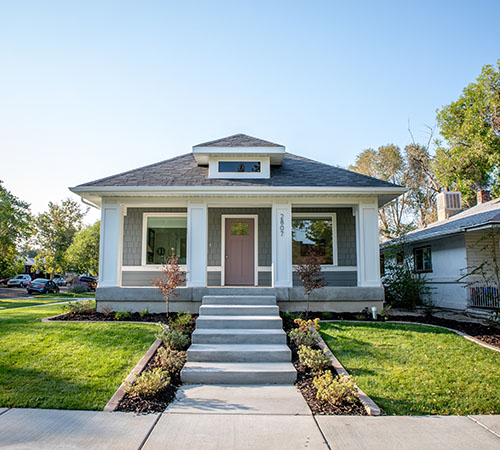 Interested buyers registered in a drawing for a chance to purchase the home, and WSU President Brad Mortensen will pull the winning name on Oct. 9 at 1 p.m. in front of the house at 2807 Quincy Ave, Ogden.

The net-zero home is the outcome of an innovative collaboration between Weber State University and Ogden City. Students from the Department of Construction & Building Sciences in WSU’s College of Engineering Applied Science & Technology made up the construction team. As many as 50 students worked on the project; the senior team consisted of 12.

Their project is a finalist in a two-year competition called the 2020 Department of Energy Solar Decathlon. Based on their proposals, 10 teams from around the world were selected to design and construct highly efficient and innovative buildings powered by renewable energy.

“One cool thing is the collaboration that was undertaken on this home with the city, the Ogden Civic Action Network, the university and our department,” Farner wrote. “It was all funded by the university as a way to give back to the community as well as to provide real-world experiences to students. We shifted our design from a duplex in Salt Lake City to this home in November (2019). Our team completed the home less than six months later!”

Janae Thomas, who graduated April, was the student project manager. She took on the monumental task because she said the future of transportation, housing and urban planning for her daughter depends on making a difference today.

“I found myself in construction because of the industry’s ability to directly impact environmental concerns and human well-being,” Thomas said. “This house showcases numerous economic solutions to improve Utah’s air quality. This house is simple to reproduce, inviting to live in and built to last generations. I’ll be proud to drive by this house and tell my children, and their children, ‘I built that.’ My journey at Weber State has opened doors I never thought possible. To all my professors, directors, the president, and industry partners, thank you for the opportunities to learn.”

The Quincy Avenue home is designed to make the “True Cost of Ownership”' affordable by nearly eliminating all energy bills. Energy costs to operate the home are estimated at just over $100 annually or around $9 per month to be connected to the electrical grid. Weber State will monitor power bills for two years to make adjustments if the HVAC and solar systems are not performing as they were designed. 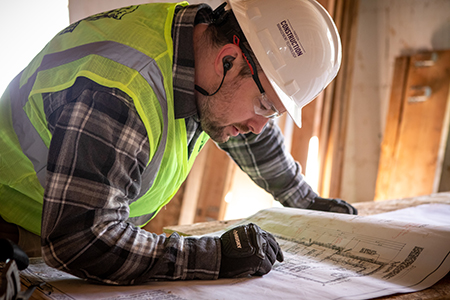 The home supports the mission of the Ogden Civic Action Network, which is committed to revitalizing the east central neighborhood in Ogden, with support from Weber State and many other Ogden institutions.

The building lot had been empty for nearly 10 years after a dilapidated four-plex was torn down. The Craftsman architectural style home was designed to not only nestle in nicely with other homes on this historical avenue but also showcase how homes can provide a net-zero energy lifestyle.

“We are excited to provide our students with the opportunity to gain invaluable green design and construction experience by working alongside professionals in the field while simultaneously creating a final product that benefits the community,” Farner said. “Sustainable homes are not just better for the planet, they are better for the people living in them. They contribute to high indoor environmental quality which is associated with good mental and physical health and significantly lower utility bills which makes the home more affordable.”

The 2,540 total square foot home (1,270 on main and 1,270 in a full basement) has 2,370 finished square feet with six bedrooms, two bathrooms and two family rooms. It incorporates portable battery backup technology to power the home’s critical functions for up to 72 hours if the electrical grid were to go down in a natural disaster or emergency. Not only will the solar array generate enough energy to offset the energy usage of the home annually, but it will also generate enough electricity to charge an electric vehicle to travel 20 miles per day.

The lot was obtained as part of an agreement with Ogden City to show its commitment to revitalize neighborhoods and breathe new life into historic districts. With support from a number of Weber State groups and Ogden City groups, the university established the Student Construction Capital Revolving Fund. When the current home is sold, the proceeds will be reinvested into the fund to continually repeat the process.

“Ogden City is excited to build on our already great relationship with Weber State University,” said Ward Ogden, Ogden City Community Development director. “Building a net-zero home that is complementary to the surrounding historic neighborhood will not only demonstrate that affordable, sustainable construction methods and materials are a viable option, but also this project will also provide opportunities for students to gain hands-on experience with various aspects of design, construction, marketing and sales." 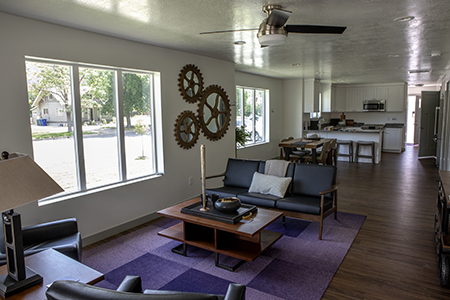 The home will be connected to the electrical grid, which acts essentially like a battery. Excess energy not being used during the day or on sunny days is put back on the grid for other neighbors and businesses to use, then the reverse is true when the home requires more energy than the solar array is producing, such as in the evening or on shady days. The net result of energy export and import is net-zero annually.

A report released by the Energy Information Administration in September 2018 found that 31% of U.S. households struggle to pay their energy bills. The same study found that about 20% of those surveyed had to go without essential needs such as food or medicine to pay utility bills. The 2016 report from the American Council for an Energy-Efficient Economy called “Lifting the High Energy Burdens in America’s Largest Cities: How Energy Efficiency Can Improve Low-Income and Underserved Communities” found that low-income households spend 7.2% of household income on utilities. This percentage was more than three times higher than the percentage of income spent on utilities by higher-income households.

Utah is no exception when it comes to utility insecurity. According to the United Way Utah 211 Program Annual Report (2016-2017), utility payment is the No. 1 assistance request. Sustainable and net zero homes can significantly reduce or eliminate major utility bills like water, natural gas and electricity, making homeownership significantly more affordable.

The building envelope of the home uses readily accessible products that require the super-efficient HVAC to heat or cool the air within the home less than once an hour where most new homes today require the air to be conditioned four to seven times per hour.

The home also has an Aerobarrio that provides a much tighter seal than is required by current energy code.

The roof uses Raised Heel Energy Trusses to allow insulation in the attic to be extended to the edge of the exterior walls. This helps to maintain conditioned air inside the home as well as prevent the leading cause of ice dams on homes in Utah.

10 teams competing in the 2020 Solar Decathlon

For more information or pictures of the project under construction, visit weber.edu/solardecathlon. To follow the team on social media, check out @wsusolardecathlon2020 on Instagram.

For photos and video, visit the following links.