OGDEN, Utah – For their contributions to the campus and community, 11 outstanding individuals will be honored at Weber State University’s 52nd Annual WSU Salutes ceremony on Oct. 16. The public is invited to attend the free Homecoming event hosted by WSU’s Alumni Association. The program begins at 7 p.m. in the Browning Center Austad Auditorium and will include a short biographical video of each award recipient. The ceremony will also be broadcast on Facebook Live for those unable to attend in person.

“The WSU Salutes program is a wonderful way to recognize and celebrate the accomplishments of these distinguished members of our Weber State family,” said Nancy Collinwood, Alumni Relations executive director. “We invite everyone to join us for this entertaining and enlightening event." 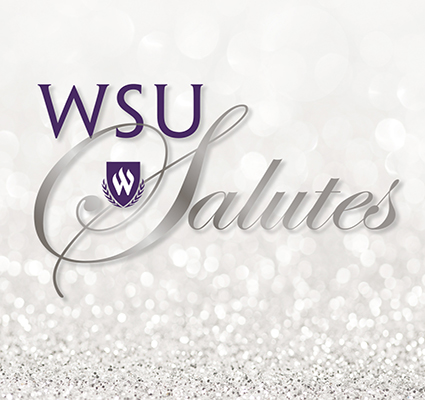 In the fall of 1954, Winslow Hurst spotted Judy Jeppson in Miss Kauffman’s 7th grade English class at Washington Junior High School. The two became friends and dated sporadically through senior high school. They reconnected in 1963 at Weber State College, after Winslow learned that Judy, a physical education major and member of the women’s basketball team, had been elected student body activities vice president. (He had the good sense to join a student committee that fell under her umbrella of responsibility.) Winslow later served as sophomore class senator, junior class president, and chief justice of the student supreme court. He also did a one-year stint as sports editor of The Signpost. Two days after Judy’s graduation in 1964, the couple married. Later that year, they settled into the newly constructed LaSal Hall dormitory as head residents. The Hursts moved out of state for graduate school, where Winslow earned his master’s degree, but returned to Ogden after Winslow was offered a job as assistant to Weber State’s dean of students. He steadily progressed through a variety of administrative positions, including university registrar. Judy started working part time at Weber as a student affairs advisor in 1984. She eventually became the full-time director of student activities. In 2000, she was named assistant dean of students at Weber State University Davis. Winslow and Judy retired on the same day in 2005 with 56 years of combined service to their alma mater. Currently active supporters of the Emeriti Alumni Council, the couple proudly note that each of their six children (and their spouses) either attended or graduated from WSU.

William “Bill” and Barbara Hughes aren’t native Utahns — they arrived here separately in the early 1980s and married in 1994 — but, after developing friendships with many Weber State professors and administrators, the couple “adopted” the university as their own. The Hugheses are longtime supporters of the Bonneville Chamber Music Festival and generously provide scholarships within the Lindquist College of Arts and Humanities and the Department of Social Work & Gerontology. They have also included Weber State in their estate planning. Barbara was raised in Pittsburgh and originally worked as a dental hygienist. After relocating to Utah, she earned a master’s degree in social work and now maintains a part-time counseling practice. She also conducts pet therapy at Ogden Regional Medical Center and SLC International Airport. Bill was raised in Nebraska and attended college on an academic scholarship. He graduated from medical school in Omaha and completed an OB-GYN residency in San Diego before establishing a practice in Layton. He enjoys gardening, model trains and golf. The couple raise puppies for Canine Companions for Independence, a nonprofit organization that serves people with disabilities.

Jeff Stephens is a seasoned educator dedicated to improving teaching and learning and providing leadership. The lifelong Weber County resident and Bonneville High School graduate earned both bachelor’s and master’s degrees at Weber State University, before completing a doctoral degree in curriculum and instruction at Utah State University in 1994. He began his career teaching language arts at Wahlquist Junior High School in Farr West, Utah, later serving as principal at South Ogden Junior High School and curriculum director for the Weber School District. In 2011, he was named Weber School District’s superintendent. Jeff, a highly respected leader in local, state and national professional organizations, has received numerous honors for his skills and professional insights, including being named 2021 Empowered Superintendent of the Year by the American Association of School Administrators and the Consortium for School Networking. Jeff is active in his community as a trustee for Ogden Regional Hospital and Weber State University.

Weber State alum Pete Sands traces the roots of his determination to launch a massive humanitarian effort in Utah’s Navajo Nation to his high school library in Montezuma Creek, Utah. “I spent a lot of time in the Whitehorse High School library, and it opened my eyes to the world,” he explained. His worldview expanded further after he enrolled at Weber State University. “My professors saw something in me that I didn't see myself,” Pete said. “Once you shed all that armor, insecurity and fear, higher education is an amazing experience.” Faculty mentors encouraged Pete to explore a variety of interests. He left Weber State in 2008 with the confidence and stamina to spend years on the road, performing original musical compositions at coffee houses, bars and other small venues across the American West. In 2017, he was commissioned to write music for and appear in the TV drama, Yellowstone. Soon after accepting a position as communications director for the nonprofit Utah Navajo Health System (UNHS), Pete became alarmed by the growing pandemic and its tragic impact on members of the Navajo Nation. With the support of UNHS leaders and community partners, he established a relief effort that delivered food, water, firewood, hand sanitizer and other supplies to an estimated 4,000 households a week. He also orchestrated traveling COVID-19 test sites. In 2020, Time magazine honored Pete as a “healthcare guardian, one who displayed the best of humanity: selflessness, compassion, stamina and courage.”

Brittany Page Benko, the Huntsman Corporation’s senior vice president of environmental, health and safety and manufacturing excellence, was born in Ogden, Utah, but attended Durango High School in Colorado. When it came time to choose a college, her visit to Weber State University’s beautiful campus made her decision to return to Ogden easy. Brittany, the first in her family to attend college, graduated from WSU summa cum laude in 1997 with a bachelor’s degree in zoology. Three years later, she received a master’s degree in biology from the University of Nebraska. She describes her impressive 21-year career in the energy industry as a “great adventure.” With few women ascending to leadership positions within energy’s current professional environment, Brittany says she’s grateful for the technical skills and tools she acquired as an undergraduate at Weber State. She claims that caring professors believed in her abilities, boosted her self-esteem, and helped her chart a future she could never have imagined otherwise. Prior to joining Huntsman in August 2020, Brittany was vice president of health, safety, environment and regulatory at Southwestern Energy. Before that, she served in a variety of environment, safety, and health-related roles with increasing responsibility at several companies, including Anadarko Petroleum, Chesapeake Energy, and BP. In 2018, Brittany’s name was included in Houston Woman Magazine’s list of 50 Most Influential Women.

Craig Trewet believes in “accelerating your readiness” by focusing on a strategic balance of education, relationships and experiences. He graduated from Weber State University with a bachelor’s degree in mechanical engineering technology, and then earned an MBA from Seattle University. He also completed executive programs at Columbia University and the University of Washington. Currently, Craig is senior director of the Boeing Production System for Boeing’s Commercial Airplanes Delivery Operations organization. Additionally, he is vice president of the Boeing Leadership Network, and has been a member since accepting his first management position in 1995. Previously, Craig led fabrication for the New Mid-market Airplane office, helping to develop and transform the Enterprise Production System. Craig has also led two Fabrication Manufacturing Business Units — Boeing Salt Lake and the Electrical Systems Responsibility Center. Dedicated to serving his community and expanding Boeing’s reputation and outreach, Craig is a member of the Board of Trustees for Bloodworks Northwest, an independent, nonprofit organization that harnesses donor gifts to provide a lifesaving blood supply to 95% of the hospitals in the Pacific Northwest. He is also actively involved with Weber State University, serving as chair of the President’s National Advisory Council. The council advises WSU’s president on priorities, plans and strategies in support of the institution’s core themes of learning, access and community.

Retired Rocket Software chairman, software development entrepreneur, education advocate and community activist Michael R. “Mike” Beasley was born in Winston-Salem, North Carolina, but moved to Utah in 1964 when his father was offered a job in Ogden. A star athlete in high school, Mike initially set his sights on playing football at Weber State; instead, he developed a passion for programming computers. He graduated in 1971 with a bachelor’s degree in data processing and was hired at IBM. After a series of promotions, Mike initiated the formation of Icing Software, an independent business unit of IBM Software, and later received an IBM Executive Leadership Award. He earned an MBA from Massachusetts Institute of Technology’s prestigious Sloan School of Management, and, in 2000, was named Most Prominent African American in High Technology by Black Press Online. Outside the corporate world, Mike served a lengthy term as board chair of the California chapter of MESA USA, a nonprofit organization that advocates access to high-quality science, technology, engineering and mathematics (STEM) education and training for underrepresented students. In 2015, he collaborated with a team of WSU software engineering students to develop a mobile app that helped Santa Clara County document its homeless population. He has created funds that assist WSU computer science students by pairing incoming freshmen or sophomores with a Beasley Scholar student mentor.

Annabelle Harris and Nathan Hole exemplify the Weber State ideals of scholarship, leadership and service. Annabelle, who received her associate’s degree from WSU in 2021, is working toward a bachelor’s degree in criminal justice with a minor in psychology. She is a Presidential Scholar as well as an Aletheia Club member. Annabelle served a mission for The Church of Jesus Christ of Latter-day Saints, working with youth. She is fluent in American Sign Language and is a member of Family, Career & Community Leaders of America.

Nathan is pursuing a bachelor’s degree in geography with an environmental emphasis and a minor in international studies. He served a mission for The Church of Jesus Christ of Latter-day Saints in Yugoslavia, where he learned Croatian, Bosnian, Serbian and Montenegrin. At Weber State, he has served as Geography Club president, LDSSA club student council member, Presidential Leadership Fellows member and Campus Connections coordinator. He plans to pursue a master’s degree in corporate sustainability.