OGDEN, Utah – For many children in foster care, attending college can feel like another challenge that comes with being part of the system. For Raquel Andreasen, a passion for learning helped her overcome that challenge and forge her own path at Weber State University.

Andreasen was placed in foster care at age 16. She said it was the safest place for her at the time and an overall good experience thanks to her dedicated foster parents. But it wasn’t without struggles, including a sense of uncertainty about what the future 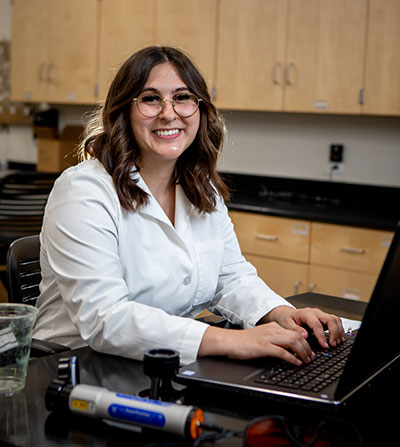 would look like when she aged out of the foster care system.

“Once I turned 18, I was responsible for myself completely,” Andreasen said. “And that was definitely difficult, figuring out where I was going to go and what I was going to do. And eventually I got to Weber, and I feel like it has been one of the best decisions I’ve ever made.”

Growing up, Andreasen said she felt like her life and future were completely out of her own control.

“That’s a feeling I wasn’t able to shake until I came to Weber,” she said. “Once I began my major, I felt I was exactly where I was supposed to be.”

Now a senior studying criminal justice with an emphasis in crime scene investigation, Andreasen said Weber State has given her the opportunity to do exactly what she wants to do with her life.

“There are so many amazing professors, and they all want to see you succeed,” Andreasen said. “They’ve made me want to further my education and have made me feel at home at Weber.”

This semester, she’s taking a hands-on forensic lab that gives her access to some of the tools and techniques she’d only known through her interest in true crime podcasts.

Andreasen said the CSI program is equipping her with skills in forensic photography, fingerprint analysis and a completed portfolio. She’s also made friends and connections with other students in the tight-knit CSI community.

Her time studying criminal justice has also inspired a new ambition: upon graduation, Andreasen plans to apply for law school in hopes of becoming a prosecutor. As a teenager in foster care, she was required to go to court once a month to discuss her case, which shaped her interest in the field.

“I had a really good experience with everyone in the courts, the case workers and the judge, and seeing how they were able to make a positive impact on my life,” she said. “I’d like to do the same for others.”

Prior to starting her junior year, she was offered a scholarship through the Ogden Foster Scholarship Program, which supports students who have aged out of foster care.

“Some of the kids who age out of foster care need continued support,” said Kris Youngberg, founder of the scholarship program. “Once you hear the statistics, you’re really drawn in and want to help any way you can.”

Youngberg said some national studies show that 1 in 10 foster children attend college, and only 1 in 100 graduates. So far, the Ogden Foster Scholarship Program has provided eight scholarships and plans to add six more in the coming year, giving more students like Andreasen an opportunity to attend college.

“That program has been a huge help to me because not only has it taken off that financial burden of school, but it’s also connected me to some really great counselors at Weber that have helped support me through life’s other obstacles,” Andreasen said.

A first-generation college student, Andreason earned a place on the honor roll and is preparing to graduate in 2023. She now wants to share her story with other foster children who are considering college but might feel that it’s out of reach.

“The one thing I want people to know is that no matter what you’ve come from or what your upbringing is, you always have control over your own future,” she said. “College is an opportunity to do exactly what you want with your life despite the cards you’ve been dealt.”