OGDEN, Utah – Weber State University student voting increased by 21.6% from 2014 to 2018, with more than 36% of the student body casting a ballot in last year’s midterm elections. The increase in student voting is part of a nationwide trend, with numbers doubling between 2014 and 2018 according to the National Study of Learning, Voting and Engagement (NSLVE) conducted by Tufts University’s Institute for Democracy & Higher Education. 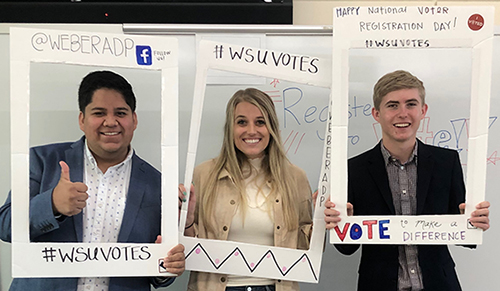 WSU regularly schedules speakers and panels to educate voters, as well as hosts numerous voter registration drives. The university also established a Weber County Elections Office Ballot Box west of the Stewart Library, which makes it easy to drop off a ballot.

“In a republic such as ours, people show their consent for their government by participating in elections,” said political science professor Leah Murray. “The more that young people participate, the more we know our nation will continue for generations to come.”

Murray acknowledged that many people nationwide think polarizing forces are threatening honest conversations on college campuses, but she said WSU has been proactive for years in taking steps to ensure students are free to speak about their politics.

“At Weber State, we see ourselves as having a role to play in making the world a better place locally, nationally and internationally,” Murray said. “Part of that is making sure our students become lifelong active citizens in their community, whether through the workforce, community service or political engagement.”

WSU’s Political Engagement Coalition (PEC), for instance, housed in the Diversity Office, works to create a safe, welcoming campus environment for all students, regardless of political affiliation. The PEC also helps register, educate and facilitate discussion among student voters.

The NSLVE is the only national study of college-student voting. Its findings are based on the voting records of more than 10 million students at more than 1,000 colleges and universities in all 50 states and the District of Columbia.

The study provides tailored reports of student voting rates to participating colleges and universities such as Weber State University. The institutions use the information to support political learning and civic engagement and to identify and address gaps in political and civic participation.

Launched in 2013 with 250 campuses, the study now serves more than 1,000 institutions in all 50 states and the District of Columbia.

For photos, visit the following links: