OGDEN, Utah – Hundreds of students, faculty and staff from Weber State University climbed to the top of Mount Ogden today to continue a century-old tradition.

On Oct. 4, 1922, over 350 Weber College students and faculty climbed the hills above what is now WSU alongside local community members and planted a Weber flag on Mount Ogden.

“We’re reliving the tradition of how Weber State made its presence known in Ogden,” said Hayley Prine, Weber State’s Outdoor Program coordinator. “It was a big deal when those folks hiked the mountain in 1922 and made their mark. This hike reminds folks who we are and also welcomes new people into our story.” 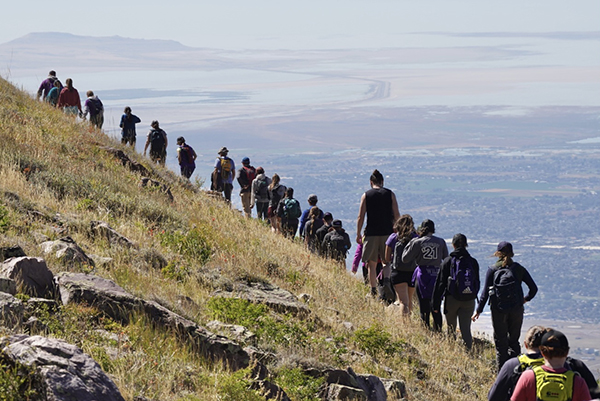 Prine has participated in the hike for several years and described it not only as an opportunity to take in incredible views of the Ogden area, but also as a bonding experience for hikers.

“It’s powerful being up there in the mountains, it’s a real connecting experience,” Prine said. “Whether it’s your first time, whether you’re a Weber State student or a community member, this brings people together.”

Kicking off the milestone anniversary was the traditional singing of “Purple and White” and the WSU Fight Song, along with remarks from WSU President Brad Mortensen. One hundred years earlier, it was President Aaron Tracy who launched the longstanding ritual.

“We don’t know what the future will hold, but we have a legacy at Weber State,” Mortensen said. “Etch in your mind this day as the starting point for whatever you will be.”

Atop the mountain was both celebration and commemoration. Participants cheered and embraced upon reaching the summit, and Mortensen unveiled a new plaque, which will be installed soon to remind future Mount Ogden hikers about Weber State and what it stands for.

“The people at Weber State have a large capacity for caring and it’s such a welcoming place,” Prine said. “It’s our strong sense of community that has really carried this tradition through.”