OGDEN, Utah – More than 60 domestic geese and ducks that previously called their home the waters around Weber State University’s Ada Lindquist Plaza have been safely relocated, thanks to the work of a new northern Utah waterfowl rescue group. 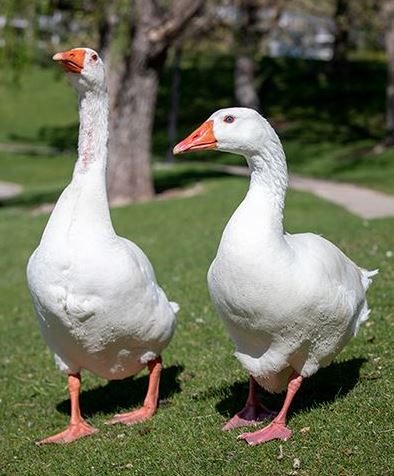 On Sept. 8, while the Lindquist Plaza water feature was drained, volunteers from Wasatch Domestic Waterfowl Resource (WDWR) rounded up 30 ducks and 34 geese over the course of 12 hours to take to area rescues and foster homes for eventual adoption. Domestic waterfowl are more vulnerable in the wild due to their inability to fly or reliably forage for themselves, said Adison Smith, founder of WDWR. The frequent draining of WSU’s pond for cleaning and maintenance purposes also creates a dangerous situation for them.

“Domestic waterfowl can’t fly away, so if they need to get away from a predator, their only resource (the water) was taken away from them,” she said. “Not only that, but a lot of them depend on the algae in the water for food, so then their food source was taken away as well.”

WSU’s waterfowl have often been considered the “unofficial” mascots of campus, showing up on merchandise like T-shirts and face masks, and featured in social media posts or guides to campus. Visiting the ducks at Ada Lindquist Plaza is No. 6 on the list for WSU’s Tradition Keeper’s program, and waiting for the geese to cross the crosswalk is a well-known campus phenomenon. While wild Canadian geese and other waterfowl will likely continue to stay around the plaza during their migratory periods, many of the longtime residents should never have been there at all.

“A lot of people actually end up getting ducks because they think they’re so cute when they're little and then they realize, ‘Oh hey, they take a lot of care and they're loud and I don't want them,’ so then they abandon them,” Smith said. “That's why Weber State had this duck and goose problem in the first place.”

Many of the abandoned waterfowl that did survive being dumped at Weber State then went on to breed with each other, creating a bigger population of domestic birds at the university, Smith said. But that didn’t mean the birds were in a safe or healthy environment. Weber State geese have been hit by cars and killed or seriously injured; several more geese were killed by an off-leash dog when the pond was drained in 2020; and many of the goslings and ducklings in the spring don’t make it to adulthood.

“We love wildlife, but there’s a place for the domestic birds and campus isn’t necessarily the safest place for them,” Woodward said. “I think Wasatch Domestic Waterfowl Resource is a great organization. We fully support them and the education that they’re trying to put out to the public.” 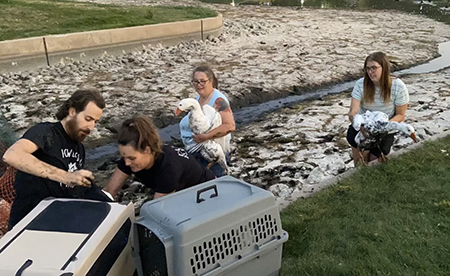 Additionally, Weber State has never fed or taken care of the waterfowl in an official capacity. Oftentimes, the birds were fed by well-meaning volunteers and visitors to the pond, which isn’t a reliable food source, particularly during the winter months.

Between people dropping off food and increased excrement, the domestic birds created a constant clean-up effort around the plaza for facilities staff. They also caused traffic delays and issues with pedestrians, Woodward said.

“We don’t want anyone to feed them,” Woodward said. “It’s a huge mess to clean up on a daily basis, and it promotes more of them getting dropped off, with people thinking they’re being cared for.”

Smith originally advocated for keeping the birds at the pond and to work on a feeding schedule for the domestic waterfowl, but with no official resources, the presence of migratory birds and the frequent draining at the plaza, she decided the best thing would be to relocate them.

With Smith’s help, facilities will put up signs instructing visitors not to feed or abandon their domestic waterfowl there in the future. WDWR will also be on call for future animal abandonment.

“We just really appreciate Weber State working with us to save their lives and help us put up those signs so that we don't have to do this in the future,” Smith said.

Updates and photos of the Weber geese and ducks will be provided on the WDWR Facebook page for those interested in their progress.