Roberts was only nine years old when she participated in her for first suicide awareness walk with Northern Utah Hope, or NUHOPE, and has remained active in their Suicide Prevention Task Force. In high school, she founded a Hope Squad suicide prevention group for teens at the Northern Utah Academy for Math, Engineering & Science in Layton.

“I’ve had a couple people close to me attempt suicide,” Roberts said. “That really shook our family and sent us forth in the suicide prevention community.” 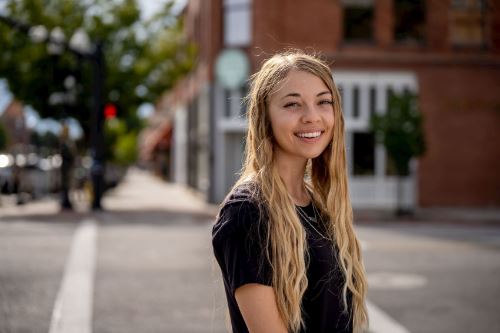 Now a senior studying family studies at Weber State University, Roberts aims to become a marriage and family therapist. She said she wants to continue helping people through various struggles in life.

“NUHOPE has helped guide that interest,” she said. “It created the desire within me to want to help people and recognize when people are struggling.”

A new start at Weber State

Since then, Miland Palmer, director of the Bachelor’s in Public Health program, has been exploring how the task force will operate in its new home. NUHOPE currently employs six educators, with plans to add three more and a program coordinator. Palmer said these educators are tasked with providing mental health and suicide awareness training in middle and high schools throughout northern Utah.

“They use an evidence-based curriculum called Signs of Suicide, which helps kids understand and recognize signs of mental health struggles in their peers or themselves, and to know how and when to reach out for help,” he said.

Utah has the sixth highest rate of suicide in the nation, with suicide being the number one cause of death in Utahns aged 10-17, according to University of Utah Health.

“NUHOPE does a good job of making sure you know those signs and sharing that information,” Roberts said. “Those skills have been super helpful in my interactions with people. If I notice a warning sign of suicide, then I’m like, ‘Okay, let's get you some help.’”

“The other thing that’s really beneficial is the opportunity for students to volunteer,” he said. “We have a lot of great opportunities where students can help forward the work of NUHOPE.”

Roberts said she was excited to learn NUHOPE was coming to Weber State and believes it will increase the program’s visibility among her peers. For those interested in becoming a part of the program, she recommends attending the NUHOPE Suicide Awareness Walk on Sept. 17 in Ogden.

“That’s a great way to start,” she said. “Rally your friends and family to go to the walk. It’s an amazing experience.”

Making those family and community connections at the walk is a big part of NUHOPE’s mission, Palmer added.

“It’s a day of hope and healing. It’s an opportunity for anyone in the community who has been affected by suicide to come together, to see that they’re not alone,” he said. “To share stories, to heal together, and to walk and show an outward sign to raise awareness of suicide and mental health in the community."