OGDEN, Utah – As Utah faces the worst drought in decades, Weber State University continues to study the unique environment of the Great Salt Lake in hopes of better understanding and preserving this natural wonder.

For decades, from testing mercury levels in brine flies and brine shrimp to examining the health of migratory bird populations to advocating for conservation, Weber State has been a leader in researching and advocating to protect the Great Salt Lake ecosystem. 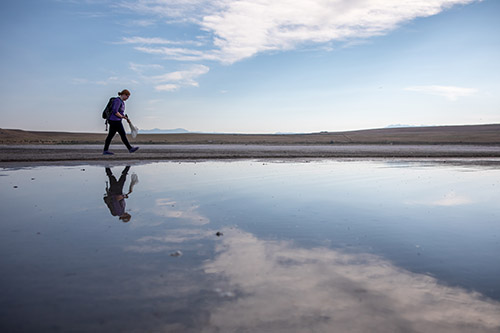 Now, as the lake recedes to record low levels, WSU’s research is more important than ever because it helps us better understand the disastrous consequences of climate change. Dan Bedford, WSU geography professor, studies climate change and its impacts on northern Utah.

“It’s been apparent for over a decade that climate change could push the Great Salt Lake system towards drying up, if our water use practices didn’t keep pace,” Bedford said. “Unfortunately, that prediction is playing out before our eyes. At the global scale, the Earth has warmed up, but at the scale of individual regions, global warming drives other climate changes, including more intense droughts in already dry places like the western U.S.”

With climate change threatening the lake, Weber State is not alone in wanting to increase research efforts around the lake. Members of the U.S. Congress are making moves to create a scientific program focused on understanding the ecology of drying saline lakes, such as the Great Salt Lake. Sen. Mitt Romney of Utah worked with others to reintroduce the Saline Lake Ecosystems in the Great Basin States Program Act in May 2021. If passed, the bill would allocate funding for the U.S. Geological Survey to assess and monitor the health of saline lakes in the Great Basin region, as well as birds and other wildlife dependent on the lakes.

The Great Salt Lake is unique not only for its high salinity levels, but also because it is a closed-basin lake, meaning it does not drain into any other water source.

This provides unique opportunities for research, which WSU professors and students have abundantly pursued.

“The lake is a valuable natural resource for Utah,” said Jonathan Clark, WSU zoology professor. “It provides habitat for millions of birds and is a factor in the abundant snowfall the Wasatch Front receives. It also provides economic benefits, including mineral extraction and brine shrimp production. Unfortunately, the lake is under many pressures that threaten not only its health but its very existence. We need to understand more about the lake, so it can be managed better.”

Clark has spent more than 10 years researching the biology of invertebrates associated with the lake. His principal focus is examining the genetic diversity of brine flies, one of the few animals that can thrive in the high salt environment. This research has been conducted by numerous students, many of which have gone on to pursue master’s and doctoral degrees. Their work has been presented at meetings throughout the U.S., as well as international conferences in Argentina, China, Russia, South Africa, Australia, France and Japan. 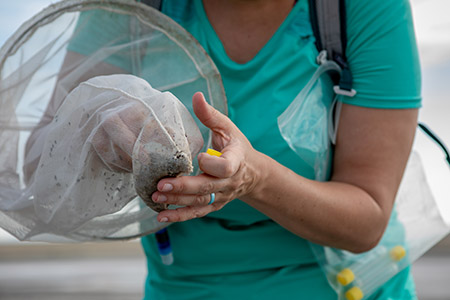 Rebecka Brasso, a zoology professor, studies invertebrates in the lake, such as brine flies and the western spotted orb weaver spider. Brasso, along with a team of students, is examining the mercury concentrations in invertebrates to determine how mercury levels in the lake accumulate up the food chain within the terrestrial habitats associated with the lake ecosystem.

Invertebrates such as brine shrimp and brine flies are an essential food source for millions of migratory birds that flock to the lake each year. The lake’s shrimp are an especially important part of the economy, supporting a multi-million commercial harvest each year. Mercury levels in the lake affect brine shrimps’ reproductive health, and Nicole Berthelemy, a zoology professor, researches these concentrations. Such information helps make clear the impact of the changing lake environment on its food chain and ecosystem, and in turn, on the economic benefits the lake has provided historically.

Carie Frantz, an earth and environmental sciences professor, studies microbialites, a rare sedimentary deposit formed from carbonate mud. The microbialites around the Great Salt Lake have been exposed by decreasing water levels, allowing researchers to study the mineral-rich deposits, which harbor an important food source. Algal and microbial growth on the surface of the microbialites serve as a primary source of food for other microscopic organisms, as well as for the shorebirds that flock to the lake.

These birds are the focus of John Cavitt, a zoology professor. Cavitt researches many of the migratory bird species that rely on the lake, including American Avocets, Black-Necked Stilts and Snowy Plovers. Along with multiple groups of students, Cavitt studies the birds’ foraging behavior, shorebird survival and productivity rates, and the consequences of land use decisions and management on avian populations.

While her colleagues study the organisms and wildlife that call the lake home, Carla Trentelman, a sociology professor, has been examining the relationships between humans and the lake. Her research provides a window into the many ways humans have affected the lake, as well as how the lake impacts the local area. Human activity such as commercial and residential development, water diversions and an increasingly hotter and drier climate have shrunk the lake to historic lows. 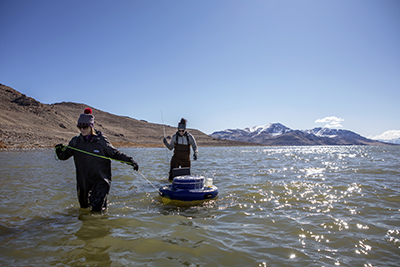 “The Great Salt Lake has provided people with livelihoods since before the European settlement of northern Utah,” Trentelman said. “Its resources made it possible for some families to weather the Great Depression, and the lake currently provides huge economic benefits for the state's economy. The extraordinary conditions the lake is facing create problems for not only the entire lake ecosystem, but also it poses threats to the industries that rely on the lake. A drying lake also poses risks to human health, as dry, exposed lakebed areas are prone to dust storms and add to air-quality problems.”

Trentelman, along with fellow researchers at WSU, hopes the many types of research focused on the lake will lead to policy and legal changes that will better protect its natural resources and habitats, and will help the state avoid the human health challenges presented by a drying lake.

Hal Crimmel, an English professor, edited an anthology, “Desert Water: The Future of Utah’s Water Resources,” which contains chapters written by WSU professors that help Utahns better understand how land and water use decisions impact the lake. Communicating these issues to the public via film also helps raise awareness. Bedford and Crimmel wrote the script for “Desert Water: Climate Change and the Great Salt Lake” with WSU graduate and documentary filmmaker Issac Goeckeritz, who produced the film. It has reached thousands of viewers and is available on YouTube at youtube.com/watch?v=AOOcVLsjihQ.

The impacts of these studies, and the many other projects led by WSU, are becoming increasingly crucial as human activity and climate change threaten the Great Salt Lake. Through faculty and student research, Weber State is helping provide the information needed to understand the lake, thus, opening the door to solve issues surrounding the preservation of this ecosystem for the future of Utah and its residents.

For photos, visit these links.