OGDEN, Utah – Paige Stevens’ journey to graduation at Weber State University was, in her own words, hard-fought but incredible. Her experiences spanned from the soccer field to the Utah State Capitol and helped her develop the drive to reach any goal in life.

As a freshman and sophomore, Stevens played on WSU’s Division I soccer team, where she put to use her 13 years of experience in competitive soccer and track. She was honored as the 2016 Big Sky Conference Newcomer of the Year, and her life was “centered around sports,” she said.

But after almost two years on the soccer team, Stevens wanted more time to explore her interests and pursuits outside of sports. The rigorous schedule of an athlete didn’t easily lend itself to that.

“I think we all come into college thinking we know who we are and what we want,” Stevens said. “And so we set out pursuing that, and any roadblock can really jar us and make us wonder, ‘Who am I, or what do I want out of life?’”

Though Stevens had many interests, she felt torn between pursuing what she enjoyed or letting the demands of the job market guide her career path. With the support of her family and WSU’s caring faculty, Stevens said she realized she could make a career out of her passions. That realization led her to social science, which Stevens said was a good fit since she loves studying people and the history of humankind.

Stevens quickly began to look for ways to get involved in the community outside of sports and apply what she was learning. She found leadership opportunities through the LDS Institute, and she studied abroad in Germany (though it was cut short by the pandemic).

She also sought mentorship opportunities and developed closer relationships with her professors. 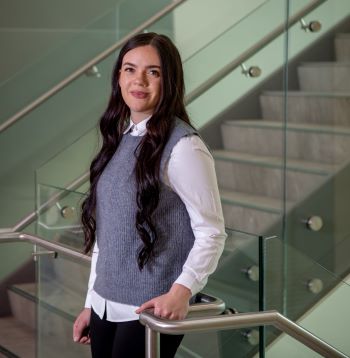 “That’s something Weber State does so wonderfully,” Stevens said. “All my professors knew the goals I had, and they were happy to either help me get there or show me the way I could get it myself. That connection is something I look back on very fondly.”

Thanks to those close relationships, Stevens followed the recommendation of several professors and pursued a summer internship with the Olene S. Walker Institute of Politics & Public Service. She wrapped up her time at WSU by serving as Senator Ann Millner’s intern during the 2022 legislative session, which Stevens said felt like a “stepping stone from student to professional.”

Now, since graduating with her social science composite teaching degree, Stevens guides her own team as the human resources executive team leader for a Target in Davis County, Utah. She said she consistently draws on her education in social science to assist her in interactions, problem solving and conflict resolution.

Though she is now working full time, Stevens said her work in the community isn’t done.

“Just as so many people supported us and pushed us toward our goals, now it’s time for us to do the same for those coming behind us,” Stevens said. “Getting involved in our communities and using the knowledge we’ve gained is an endeavor that’s worthy of our time and attention.”