OGDEN, Utah – Weber State University is taking another step in its goal of becoming a sustainable, carbon-neutral campus by installing a solar covered array over the W10 parking lot, on the northwest side of the Ogden campus. 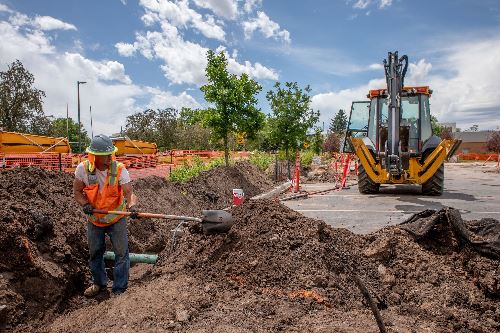 “We are very excited about the first solar covered parking structure at Weber State,” said Mark Halverson, Facilities & Campus Planning associate vice president. “The location in the W10 lot makes a clear and visible statement about the sustainable values the campus holds. The new solar array will be a significant step forward toward our carbon neutral goal, and we hope it is the first of many similar installations.”

Weber State broke ground in June on the solar array, which is the first of its kind on any of the university’s campuses. As an added benefit, the array will turn W10 into a covered-parking lot, protecting vehicles from the elements. Construction is expected to be finished by the beginning of the fall semester.

When completed, the array will house 550 kilowatts of solar panels that will feed directly into Lindquist Hall and the campus electrical grid. The power produced by the array is expected to offset 80% of Lindquist Hall’s energy consumption.

“Solar is a major piece of the university's plan to reach carbon neutrality, and this array will help us with that goal,” said Justin Owen, WSU energy manager. “It will not only save money on WSU's utility bills, it will also reduce WSU’s environmental impact.”

Weber State currently has approximately 6,500 solar panels in use across all of its campuses, and the new array will add almost 1,400 panels to that number.

In 2007, Weber State set the goal of becoming carbon neutral by 2050. The university is set to reach carbon neutrality 10 years ahead of the original goal. Since 2007, WSU has reduced its consumption of electricity by 32%, natural gas consumption by 30% and total greenhouse gas emissions by 22%. WSU has reduced energy costs by 47% in the process, saving more than $13.6 million in the last 10 years.