OGDEN, Utah — From designing a state-of-the-art bicycle brake system to helping a musician create a prosthetic device to hold a guitar pick, Weber State University students are designing, engineering and prototyping new technologies for businesses and the community.

The Concept Center, housed in the College of Engineering, Applied Science & Technology (EAST), has worked on more than 40 large projects and collaborated with 100+ companies.

The Concept Center evolved from the Utah Center for Aeronautical Innovation and Design (UCAID), and now focuses on providing students hands-on learning experiences through a broad range of industry-sponsored projects.

The Concept Center is currently working with TRP Brakes, an Ogden-based company, to test and prototype new concepts in bicycle brake and component integration with wireless technology. It was a learning curve for both the company and the students as they found a balance between the company’s needs and students’ initial understanding and abilities. Projects sometimes take longer using students, but students bring a fresh perspective and produce quality products, and employers can observe potential employees firsthand. TRP and the Concept Center have a series of ongoing projects ranging from integrating wireless technology into their components to casting prototype brake levers for TRP’s professional riders to test.

“The Concept Center is good for the community as it puts a small part of the university in a reciprocal position of involvement with others,” said Nicholas Riddle, TRP Director of Product Development. “It’s not just an isolated, idealized environment on the hill.”

The Concept Center pushes students beyond classroom theory with difficult, messy projects, Riddle said, and it also helps them learn to be efficient independently by establishing their own learning and interests.

One student assigned to the TRP project, Trent McLelland, impressed the company enough that TRP hired him as a full-time intern while he finishes his degree. “Trent really pushed and dedicated himself,” Riddle said. “He was mentally ready for the challenge of product design in which not all projects are winners and not all tasks are designed for success like a classroom project.”

McLelland said the Concept Center supplemented his formal education. “While my courses at Weber State have given me a lot of information in regard to industry practices, there really is no substitute for industry experience,” he said.

Any member of the community who needs an idea or a design can take their challenge to the Concept Center. Nothing is too big or small, not even a guitar pick.

Scott Rogers had a problem he’s been trying to solve since he began playing the guitar in his teens. Rogers, a WSU English professor who performs regularly at local and state events, was born with small digits on an underdeveloped left hand.

“I use my little thumb digit as a pick,” he said. “The problem is that it gets really cut up and damaged over the course of a few hours of really playing, so I have never been able to play as often as I would like because I have to heal between shows.” 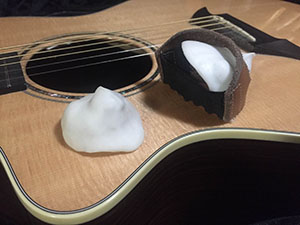 Rogers tried using moldable plastic attached to a cuff, but the soft plastic picks meant he had to take 20 to a gig, and by the end of 2.5 hours, he had worn out most of them. He asked if somebody could cast a mold for him, and David Ferro, dean of EAST, suggested the Concept Center.

Rogers and the team of students are still developing the product. “It’s a bit like Goldilocks right now: some plastics are so hard that even though they last a fairly long time, they destroy my guitar strings,” Rogers said. “Some plastics are too soft. I think we’ve got the shape of the prosthetic nailed down for now, so the next thing is going to be figuring out what plastics work best.”

However it works out, Rogers has been pleased with the Concept Center students’ work. “They have been phenomenal all the way around,” he said. “They were really responsive to my requests for new molds or for tweaks to the existing design. I’m really excited to see what they come up with.”

While project managers, faculty and staff advisors are nearby to assist, it’s the engineering students who ultimately dictate their projects’ design and manufacturing, said Shayne Chambers, Concept Center mechanical engineer. “We want the students to gain experience and be involved in the process as much as possible.”

A project already in use is a custom aerial drone with wireless cameras that hovers 200 feet in the air. The drone allows first responders a bird’s eye view to gather information during an emergency or investigation. “The students helped design and manufacture every part for this system,” Chambers said. “It required countless hours of refining and testing to get it right.”

According to Chambers, it does not make sense for every person interested in prototyping to have all the equipment and expertise to develop a successful product. Nor would that be affordable. “We provide the resources, time and experience to minimize the risks of new design,” he said. 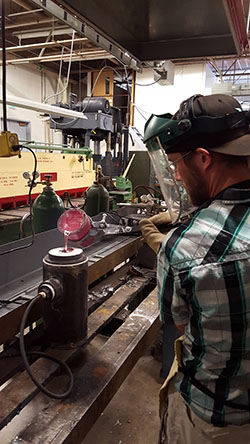 The Concept Center is nonprofit. Consulting and project fees allow the center to hire students and staff, and pay for materials and upkeep of specialized equipment. “Everything we are paid to work on a project is reinvested into student education and training at WSU,” Chambers said.

Students spend one or two semesters working a business’s projects, according to Alex Lawrence, Vice Provost for Innovation and Economic Development. “It’s a situation that benefits everyone,” he said. “Students get the opportunity to work on relevant projects, and companies have the chance to test out students as potential employees.”

Man Dinh, a senior who expects to graduate in fall 2016, said that working at the Concept Center helped him further develop his problem-solving skills in the engineering field. After working on a Bluetooth communications module for TRP, Dinh was hired as a full-time electrical engineer at Hill Air Force Base.

“The Concept Center is a great place to work for students who are not afraid to learn and take on challenges,” Dinh said. “A lot of projects the Concept Center works on are novel, so a creative mind is a must.”

McLelland said that while Concept Center students sometimes take a little longer to solve a problem, when they get the job done, it’s more satisfying to both the students and their clients.

“Knowing that you’re furthering students’ education and helping them gain the skills necessary to further their careers can be a powerful feeling.”

Visit weber.edu/east/concept/default.html for more information about the Concept Center.