OGDEN, Utah — A custom-made trike is opening up new roads — and paths, sidewalks or trails — for 8-year-old Torsten Lambert. In fact, his new wheels can take him many places he couldn’t previously explore.

Torsten was born with cerebral palsy, which affects his balance, movement and motor skills. He can’t pedal or steer a typical two-wheel bike. That made it hard, but not impossible, to put him in the rider’s seat. 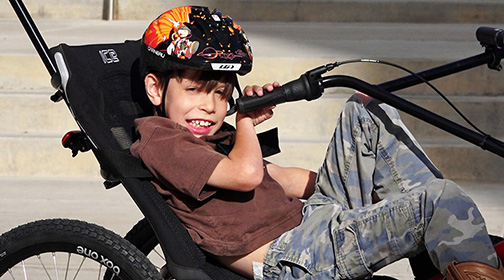 Five Weber State University mechanical engineering technology students dedicated their senior capstone class to designing and building a trike made just for Torsten. They constructed it from the ground up, basing each decision on his specific needs. The final product is a trike that Torsten can ride and maneuver on his own.

“It’s a great addition to getting him around and, hopefully, getting him a little bit of freedom so that he doesn’t have to rely on us so much,” said Josh Lambert, Torsten’s dad.

When Torsten is on his trike, he doesn’t need his parents to help him stand or sit upright. Instead, he can focus on riding. Though he’s still learning to ride the trike, he gets to choose where he goes. Even bumping into a wall elicits a laugh before his dad gently guides him away, and he can zoom off again.

“So much of his life, he winds up with adults in charge of where he gets to go and what he gets to do,” Josh Lambert said. “If he learns how the brakes work and steering and everything, he’ll actually have some say in his life. And that would be spectacular.”

While the trike is made for Torsten to enjoy now, the Weber State students included features that will allow him to ride for years to come. It’s lightweight, so Torsten can pedal it without quickly tiring. It includes carefully placed straps to keep him balanced, but not make him feel restrained. The seat and handlebars are adjustable, which will allow the bike to grow with Torsten. The chain can even be swapped out as he gets stronger, and a gear shifter can be set based on his strength.

“It’s really nice that it is so functional and so cool,” said Jennifer Lambert, Torsten’s mom. “There are so many things we can do with it, which we really appreciate.”

The students put painstaking effort into making sure the trike would work for Torsten. They scheduled about seven hours a week to work on the bike, and ended up spending even longer on the project toward the end of the semester.

“Given the importance of this project, who the bike was going to and what it was going to be used for, there was no question, we had to go above and beyond,” said Jordan Barker, engineering student and team project manager. “It was very rewarding and worth every minute of work.”

Even when parts took months to arrive, or the wrong part arrived altogether, the students said they never lost sight of the importance of the project.

“There was a lot of fine-tuning and reworking,” said Shelby Chatlin, engineering student and team member. “But by the end, we created something really cool. It was a heartwarming feeling knowing that I did something for someone else. You can’t beat that.”

The team was awarded a grant through the Alan and Jeanne Hall Endowment for Community Outreach. Since custom-made adaptive bikes can cost thousands to buy, and insurance rarely covers bikes, the grant allowed students to gift Torsten and his family a trike they may have otherwise never been able to own.

“The cliché, ‘Let’s change the world’ is often difficult to achieve,” said Dan

Magda, mechanical engineering technology professor. “However, with the support of the community, the right tools and the desire to achieve, together we can accomplish anything.”

The idea for the trike was born through a collaboration between the engineering department and the university’s Children’s Adaptive Physical Education Society, known as CAPES! The program, which is for kids with physical and developmental disabilities, provides skill-building activities during fall and spring semesters.

Torsten and his parents have participated in CAPES! activities for more than a year. They say it’s a place where they can connect with other families with similar experiences.

“There isn’t really another kid in his school that’s like him,” Jennifer Lambert said of her son. “So this helps him get through the week. If he’s having a hard time at school, he gets to come to CAPES! and just have some fun.”

When Magda was looking for possible projects for his seniors’ capstone class, he invited families in CAPES! to share their ideas. Jennifer and Josh contributed a couple of different ideas, but the bike captured the imagination of the engineering students.

“We really appreciate everything the students have done,” Josh said. “The weather is getting nicer outside, school is out and we’re planning on getting out in some empty parking lots. That means more freedom for Torsten.”

To view a video of Torsten riding his bike, click here. Visit this link for footage and soundbites without background music.