OGDEN, Utah – As part of his general education requirements, Raul Torres was taking a public speaking class in spring 2019, where his enthusiasm and determination to succeed as a Wildcat, caught the attention of the adjunct instructor, who was also the Weber State University marketing and project manager. He willingly agreed to pose as the graduation speaker in a promotional video, showcasing the grit and determination of Weber State students pursuing their educational opportunities.

What isn’t obvious in the commercial is that Torres has faced tough challenges on his educational journey, including the death of his sister and the disruption of a pandemic, but he maintains his positive attitude and determination to finish what he started.

“There isn't any other place that I've ever been in my life where I've seen more grit and determination than at Weber State,” Torres said. “Some of the greatest lessons I've ever learned were from students. They're the ones who motivate; they're the ones who inspire and help us through when things get tough. Here you can learn so much from the people on your left and right.”

Torres initially chose Weber State at the encouragement of his sister Elva “Lala” Torres, and she chose Weber State because she admired basketball great Damian Lillard. She convinced Raul they should attend the university that helped develop such incredible talent in a student.

Raul enrolled following a church mission and found academics were not all the university had to offer.

“I joined Phi Gamma Lambda,” he said. “I joined the cycling club, and I joined the ski club. I just like being involved, and Weber State offers so many things for so many people.” 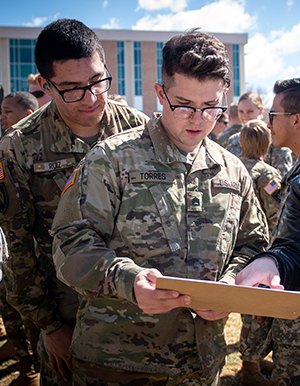 Together Raul and Lala also enrolled in WSU’s ROTC program. They attended bootcamp together and planned to follow their father, an engineer, into a career in the military. Raul still wants to accomplish everything they dreamed, but when he does, it will be in his sister’s memory.

In 2019, Lala transferred to the University of Utah for a film studies program. She continued to participate in ROTC. Just as the semester began, on Aug. 26, during a routine physical training exercise, she collapsed, and passed away two days later from natural causes.

Lala was Raul’s only sibling.

“She was going to be an officer for the United States Army,” he said. “She had the same dreams as myself. I guess the biggest part that I miss about her is that she was going to lead. Now I guess, the responsibility is on me. I don't honestly talk about my sister much. I kinda like to pretend she's still alive and here with me at Weber. There will always be a piece of her here.”

Raul absorbed the shock of his sister’s death in fall semester 2019, and then in the middle of spring semester 2020, like all Weber State students, Raul suddenly had his education disrupted due to COVID-19. He admits he was a little nervous about the transition. He depended on face-to-face faculty instruction and review to succeed.

“I decided it was no time to panic. I got up early to do my reading,” he said. “Online was actually quite fun. The professors were very responsive. I was surprised how fast and efficient everything turned out.”

Raul managed to successfully complete all five classes virtually and is enrolled for more credits in summer 2020.

In addition to his classes and his continued physical training for ROTC, Raul has had time to pick up some interesting hobbies while 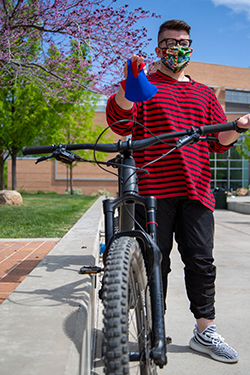 hanging out at home. He started making personalized face masks for his family. For example, the one for his dad, has a camouflage design. Eventually, he inspired his extended family, including aunts and cousins, to volunteer to sew masks to donate.

Raul also decided to learn to knit ski caps because skiing is never far from his mind. Even when sitting in class at Weber State, he was aware the mountain trails were just moments away. In fact, in order to spend more time on the trails, during the pandemic, he ordered parts online to build a new mountain bike. He plans to ride the bike east of the campus, starting at his favorite 27th Street trail.

“It’s amazing what you can do, when you have a little time and interest,” Raul said with a laugh.

Raul is in his junior year as a criminal justice major In the College of Social & Behavioral Sciences. He has some time before becoming the graduate he represents in the commercial. However, he’s determined that what is pictured in an ad will one day be his reality and a path to the future he has planned.