Conspiracy theories meet at the intersection of the specialties of Weber State University philosophy professor Richard Greene and Utah State University philosophy professor Rachel Robison-Greene. The couple began writing “Conspiracy Theories in the Time of Coronavirus” before the 2020 presidential election, just as the conspiracy theory landscape began to change rapidly. Greene specializes in the best practices of belief formation and the study of epistemology - theories of knowledge, while Robison-Greene is an expert on ethics and moral psychology. Both also study pop culture and their publisher thought they were well suited to research the impact of conspiracy theories on society. 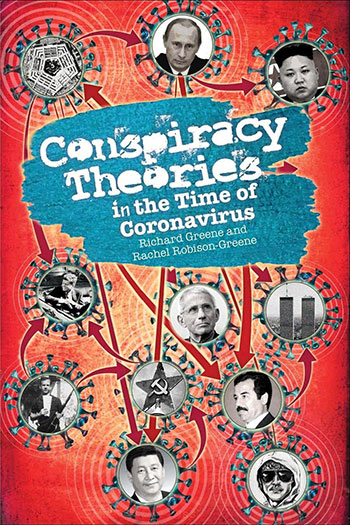 “Our account of what a conspiracy theory was didn’t change very much,” Richard Greene said. “However, all the social implications and the ways conspiracy theories spread and affected society changed quite a bit during the time of the election. We had to rethink a lot of our previous research.”

Each chapter of the book begins with discussing different conspiracy theories that have been popular at various points throughout history such as birds not being real, the Illuminati and the assassination of President John F. Kennedy.

“So many conspiracy theories employ racsist and antisemitic motifs,” said Richard and Rachel. “We hope to help people avoid becoming susceptible to that mindset.”

Richard and Rachel also hope that readers get a clearer understanding of what conspiracy theories are and how they’ve been used over time. Though the book covers lighter and heavier material, it is written for all ages.

“Conspiracy Theories in the Time of Coronavirus: A Philosophical Treatment” launches on June 14. It will be available globally at Target, Walmart, Amazon, Barnes and Noble and is currently available for Kindle download.