OGDEN, Utah – Weber State University’s chair of radiologic sciences says his own experiences helped spur the idea to use the software, computer technology and ingenuity in his department to create 3-D models of joints for dental-implant planning and facial reconstruction.

WSU’s radiologic sciences program is the only program in the nation that teaches technologists the use of 3-D reconstruction imaging. 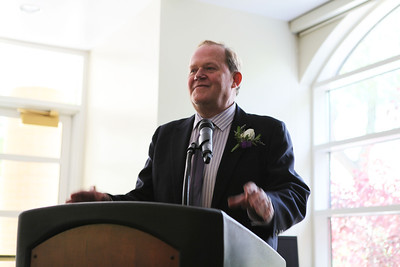 “Our 3-D images give us absolute alignment, which could allow us to take the image of a joint or jaw and print a model on a 3-D printer,” Walker explained during the acceptance speech for his award. “When I had my knee replaced, it was one-size-fits-all. If we reconstruct and print in 3-D, we should have a model knee that health care providers could use to plan and create devices for a perfect fit in the operating room.”
That is a challenge Walker now can pursue thanks to his selection as endowed chair and the accompanying $30,000 annual endowment gift that he plans to donate back to the program.

Support from the foundation also will allow for collaboration between radiologic sciences and the dental hygiene departments in the Dumke College. WSU will be the only school in the country to educate dental hygiene students in head and neck 3-D imaging.
“Dentists have told us they are sending their planning for dental implants and reconstructive work to Germany, which costs them $1,000 per patient,” Walker said. “We want to educate professionals who have the expertise to do that right here at home.”
Making a difference close to home is central to the Dr. Ezekiel R. and Edna Wattis Dumke Foundation mission.

Established in Ogden in 1958 by Dr. Dumke and his wife, Edna Wattis Dumke, the foundation has reflected the Dumkes’ lifelong commitment to healing and the betterment of society. During the past half-century, the Dr. Dumke Foundation has given millions of dollars to numerous organizations and charities in northern Utah, including Weber State University, the Midtown Community Health Center in Ogden, the Egyptian Theatre Foundation, Children’s Aid Society of Utah, the Treehouse Children’s Museum, the Ogden-Weber Applied Technology College and McKay-Dee Hospital.

“It’s an honor to be a partner with Dr. Walker and the entire college to share their passion, excellence, collaboration. The interdisciplinary approach is everything my grandparents were about, and what we have tried to accomplish,” said Claire Ryberg, a member of the Dumke Foundation Board and a granddaughter of Dr. and Mrs. Dumke.  “We thank Dr. Walker and the Dumke College for letting us be part of their lives. We love this great institution and look forward to more of the same.”

The 3-D collaboration afforded by the endowed chair will include at least 60 dental hygiene and more than 400 radiologic sciences students every year in all levels, from associate to master’s degrees.

The dean of the college, Yasmen Simonian, said Walker’s enthusiasm and dedication have been a driving force for innovation over the course of 32 years at the university.

“Dr. Walker’s accomplishments, philanthropy and continuous striving for excellence make him the most suitable individual for this distinguished honor,” she said.

The Department of Radiologic Sciences was named the top program in the country in 2002 and 2012 and has been ranked in the top five in U.S. for eight years. It has 550 clinical affiliations in clinics and hospitals around the country where WSU graduates are employed, including in every hospital in Utah. For rural communities in the west, the program offers degrees in a hybrid format, which combines online learning with in-class instruction. Students in the program have a 95 percent pass rate on all certification exams. These successes the Dumke family said reflect Dr. Dumke's outstanding accomplishments.

Dr. Dumke was a prominent physician in the Ogden area who pioneered the use of spinal anesthesia. He was instrumental in forming the Ogden Surgical Society. Saint Benedict’s Hospital, which opened its doors in 1946 and is known today as Ogden Regional Medical Center, owes its existence in a large part to Dr. Dumke’s efforts. He served as the first chief of staff at both St. Benedict’s and Dee Memorial hospitals in Ogden.

Mrs. Dumke was active in the community of Ogden and was a tireless supporter of the arts and cultural activities. She and her husband enjoyed traveling and the outdoors.