OGDEN, Utah – Large drilling rigs are boring holes deep in the earth on the north side of Weber State University’s Stewart Stadium to create a system to heat and cool university buildings more efficiently and cost effectively. 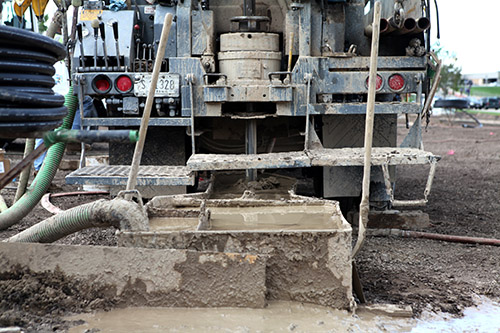 The project was one of a number of sustainability efforts cited by the Utah Association of Energy Users (UAE) when it presented Weber State with an “Outstanding Leadership in Energy Efficiency and Conservation” award in May.

The awards were given to UEA members Hexcel Corp. and J.R. Simplot Company, as well as Weber State, which is not a member of the organization.

Since the 1960s, Weber State has heated and cooled its buildings with super-heated steam or chilled water circulated through 1.5 miles of pipe in underground tunnels connected to every building.

The university will continue to use those pipes, but now part of the water’s path will include travel through underground wells. WSU is also converting its heating, ventilation and air conditioning systems (HVAC) to variable refrigerant flow (VRF).

The benefit of the underground wells is the water’s temperature is restored to an even 57 degrees, so it takes much less heating and cooling to make buildings comfortable.

“As each building is heated and cooled, compressors will push water in and out of the pipes,” said Jacob Cain, WSU operations director. “Then we monitor the loop, and if the water gets too hot or too cold, we send it underground. The compressors can easily handle temperature fluctuations between 45 and 105 degrees.”

More than 200 wells, 5.5 inches in diameter and 275 feet deep, will operate underneath the W4 parking lot on the northeast corner of campus. The parking lot already needed to be replaced, so the wells added $500,000 to the $3 million project. The wells should provide a return on investment in energy savings within 10 years, and are expected to last 60-75 years.

The wells augment the new VRF systems being installed during new construction projects or when the HVAC systems wear out in buildings. VRF, developed in Japan in the 1980s, pushes water through a refrigerant compressor, which takes much less space than traditional HVAC systems and costs less to install and maintain.

With VRF, heat can be shared between buildings and even between rooms in buildings, so each office has its own thermostat, allowing occupants to adjust temperatures to their own comfort.

“We’re timing it with our capital improvements, so we’re replacing systems in buildings that were due for mechanical renovations anyway,” Cain said. “We tie a little bit of energy money with the renovation projects. But we are finding that the renovations are not as expensive as people think. In fact, the new systems we’re installing are less expensive per square foot than just replacing the systems that were there previously.”

The Miller Administration Building was retrofitted with VRF in 2015. Wattis Business and Stewart Library are undergoing upgrades this summer, and the new Tracy Hall Science Center will use a combination of VRF and heat recovery chillers. 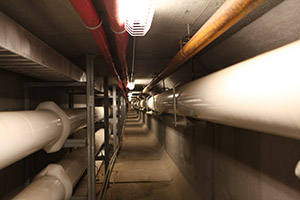 Weber State also is upgrading all of its lighting to LEDs, adding solar panels to many buildings both in Ogden and Layton, and retrofitting windows for energy efficiency. In 2015, WSU was awarded a Division of Environmental Quality Clean Fuels grant to purchase three electric hybrid vehicles (in addition to one Chevy Volt already in the fleet). WSU’s first electric vehicle charging station was installed at the campus Public Safety Building to serve the growing electric fleet.

WSU uses electric golf carts as utility vehicles for facility management crews and will equip the carts with roof-mounted solar panels to provide all of their power.

The Utah Association of Energy Users noted in its award citation that “Weber State continues to use innovative technology to reduce campus energy usage and its emissions.”

Weber State’s Energy & Sustainability Office is responsible for implementing the campus Climate Action Plan and transforming the university into a carbon neutral and sustainable campus by 2050.

“Our long-term strategy is to get completely off fossil fuels, get onto electric and then produce electricity renewably,” Cain said. “That’s our carbon-neutral strategy in a nutshell. We took our pledge to be carbon neutral by 2050 seriously, and we know how we’re going to do it and will probably reach our goal 10 years ahead of schedule.”