WSU Researcher to Discuss Impact of Housing Discrimination in Ogden

OGDEN, Utah – Weber State University adjunct economic faculty member Jennifer Gnagey will present findings from her ongoing research into the history of housing discrimination in Ogden and Weber County on Thursday, May 20, at Ogden’s Union Station. 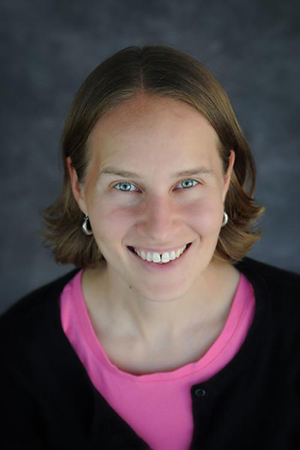 “Tracing the Legacy of Housing Discrimination in Ogden” is an in-person event that begins at 6:30 p.m. To get a Zoom link, register for the presentation on Union Station’s Facebook event page. Gnagey, who teaches in the John B. Goddard School of Business & Economics, will discuss discriminatory housing practices such as redlining and racial covenants and how they were used to shape neighborhoods in Ogden.

“People often think government-sanctioned housing segregation is something that only happened in the South. But in fact numerous policies and practices in northern and western states were used to create and sustain racially segregated neighborhoods,” Gnagey said.

Redlining is the practice of refusing to issue a mortgage loan or insurance to a person because they live in an area that’s considered a poor financial risk. It was often used against neighborhoods with high minority populations and to keep minorities from owning property. Racial covenants are found on property documents and were used to restrict homeowners from selling their property to anyone “other than the Caucasian race.”

Both practices were used in Ogden and Weber County to develop housing standards in the mid-20th century, Gnagey said. Using digital records from the Weber County Recorder/Surveyor’s Office, she found and mapped several instances of racial covenants for Ogden houses. Gnagey has been working on the project for a little over a year and recently received grant funding to deepen her research.

“We have found three racial covenants so far: two on Ogden’s East Bench and one in South Ogden. We anticipate finding more, but we don’t yet have a good sense of the scale of these covenants in Weber County,” she said.

This year, the Utah State Legislature passed H.B. 374, which prohibits racial or other restrictive covenants on property documents, and gives homeowners a chance to modify any documents with those covenants on them for free. While homeowners can do this anytime the Recorder’s office is open, Gnagey’s research team will make themselves available at the Weber County Recorder’s office on Tuesdays from 1-3 p.m. this summer if homeowners want help searching for covenants on their property or have other questions about this new law. 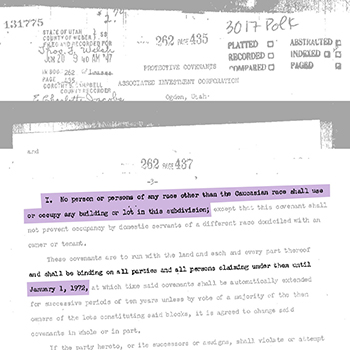 The effects of discriminatory housing practices don’t just have an economic impact, but a cultural and social one as well. Student research assistant Marisa Arreguin, a sociology major, grew up in Ogden and noticed certain stereotypes surrounding particular neighborhoods or schools. She said it was interesting to note which of these stereotypes were likely created because of the legacy of redlining in Ogden.

“The redlining that was created included explicit language and terminology such as ‘colored people’ and deemed areas as hazardous that included poor or foreign-born people,” Arreguin said. “The classification of the citizens was reinforced by legal racial covenants that further perpetuated ideals and beliefs about social classes in Ogden that are still accepted beliefs about the city today.”

Gnagey and Arreguin both said it’s important to acknowledge the history of housing discrimination and that those practices didn’t just happen in big cities, but in Ogden and Utah as a whole. The legacy of such practices continues to have a far-reaching impact, they said, especially as more people move to Ogden and housing prices soar across the state.

“Racial covenants show us that neighbors working together can be a powerful force to perpetuate discrimination, but I think it is possible to use that same power of collective action and peer pressure to advance inclusion,” Gnagey said.

Gnagey said she looks forward to talking to community members at Thursday’s event and hearing their feedback. She also runs a Facebook group, “Neighbors Further Fair Housing,” where the community can discuss the project and affirmative steps neighbors and local authorities can take to ensure fair housing.

To see the redlined 1931 map of Ogden, visit this link.

To see the racial housing covenants, visit this link.