He was a victim of bullying in elementary and middle school, which caused him to dislike school. However, during his time in high school, Frias was part of Latinos in Action, an organization where he was surrounded by others his age with dreams to earn degrees and go to college. After he graduated, Frias took the summer to contemplate what he wanted in his future, and he decided he was ready to pursue higher education.

Frias says his journey to graduation was “quite the rollercoaster,” but after his many years of student involvement, he concluded his time at WSU by earning a degree in professional sales this spring.

“One thing that I’ve always told myself is ‘I didn’t come this far to only come this far,’” Frias said. “I have always been pushing myself to reach my goals and that doesn’t just end with graduation. I want to keep climbing, grinding and never stop growing.”

Before his first semester started, Frias enrolled in the Summer Bridge program, which is designed to help first-generation students transition from high school to college. The program was transformative. Not only did he get what he needed to prepare for this challenge, he also met his best friend and girlfriend Andrea Hernández, and the two have made their higher education journey together. Hernádez also graduated this spring with a degree in dental hygiene.

“Andrea and I had to sacrifice a lot of date nights and make them study nights instead,” Frias said. “She and I have been together since our first day of school and all our service opportunities. I just want to thank her for always inspiring me to do more.”

Although he had a slow start to higher education, once in, Frias participated in everything he could. After Summer Bridge, he got involved in the Emerging Leaders program, where he was assigned a mentor who helped him adjust to college. Frias said that made all the difference. For example, on his first exam in an entry-level math course, he scored a 36%.

“I remember going home that day and asking myself if higher education was really for me,” Frias said. “I felt like giving up, but my girlfriend and the Emerging Leaders program inspired me to keep on pushing.”

After that first exam, Frias went on to have a successful first year of college and a very involved career at WSU. He joined several additional organizations, including Student Involvement & Leadership (SIL), the Center for Community Engaged Learning (CCEL) and the Alternative Breaks program.

“One of my biggest accomplishments at Weber State has been all the service opportunities I’ve had,” Frias said. “Everything I have been involved in has taught me something new.”

Frias wanted to make sure other students felt the same support he did when he started at Weber State, so he became a mentor in the Emerging Leaders Program. 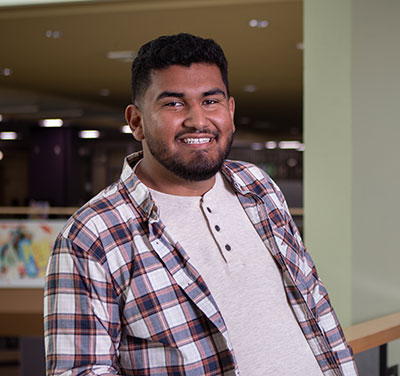 “Gio is very kind, positive and thoughtful,” Hernádez said. “He has always supported me and motivated me and others to be better. While we were in school, most of the time we were doing homework together. He is so motivated and he works hard for what he wants.”

Frias went on to join the Weber State Student Association Service Team as the Done-in-a-Day chair where he planned weekly service projects for the campus community. This work led him to volunteering at the Weber Cares Food Pantry, where he and Hernández advocated for the pantry to move to a larger space. The pantry now resides in the Stewart Library, where it provides for WSU and surrounding communities.

Teresa Martinez, student engagement coordinator for the Center for Community Engaged Learning, said those in CCEL cannot wait to see what else Frias does after he graduates.

“Gio continues to find ways to give his time to the community as he winds down his time at Weber State,” Martinez said. “He has made a lasting impact with CCEL, and any time he visits the office, he comes in with a huge smile and humble demeanor. It was a privilege working with him.”

After two years in SIL, Frias took on the position as a trip leader for Alternative Breaks, where he planned two successful volunteer trips — one in the midst of a global pandemic. Before planning his own trips, he also attended trips in the Dominican Republic and Hawaii. The Alternative Spring Break program gives students a chance to spend a week immersed in service work. Trip participants collaborate with nonprofit organizations to serve different communities in meaningful ways. To ensure student safety during the pandemic, Frias led a local trip where students worked with organizations based in Salt Lake City and Ogden.

“It was a great experience,” Frias said. “The trip participants got to see and help with the problems we have right here in our own backyard.”

In March, Frias oversaw a trip to Hawaii where students focused on environmental sustainability. Participants took part in beach clean up projects and worked to remove invasive plant species and replace them with plants native to Hawaii.

Frias said he would not have been successful in college without help from his parents, professors and his girlfriend.

“My parents sacrificed everything to give me and my family a better life. They left their home in Mexico, and that is something I can’t imagine myself doing. They gave me the opportunity to chase my dreams,” he said. “I thank them and parents all around the world who made sacrifices to get us to graduation and beyond.”