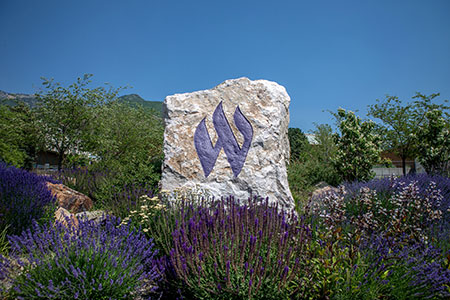 In 2014, two professors and their students conducted a water awareness study across WSU's Ogden campus. Their findings showed that with Utah’s impending droughts, Weber State’s water usage and practices needed more attention. This study led to the creation of a campus water conservation specialist, the implementation of new water practices and the formation of the Water Council, which worked with Hodge to write the Water Action Plan. Together, they set a goal to reduce campus water usage 30% by 2025.

Weber State achieved the goal in 2021 by installing weather sensitive irrigation systems and new toilets certified by the Environmental Protection Agency, among other practices.

Drew Hodge, who accepted the position of water conservation and stormwater coordinator in 2016, began by assessing which campus areas were receiving too much or too little water and which areas could benefit from xeriscaping — a landscaping style that requires little to no irrigation. His findings led to a campus that uses both xeriscaping and landscaping to maintain a unified beauty, while significantly lowering water usage.

“I started working really quickly on what I call the Water Action Plan,” Hodge said. “I worked on it for a number of years to get it right, and I broke our water usage into three categories: culinary, secondary and stormwater. The goal of the plan was to improve our storm water management and lower the usage of culinary and secondary water on campus.”

To increase the use of stormwater on campus, Hodge and the landscaping teams are working to improve retention in the Ada Lindquist Plaza water feature in hopes of creating a more consistent source of irrigation water. Teams also upgraded campus equipment to reduce usage of culinary water in existing facilities.

To make these efforts a collaborative process, Hodge partnered with landscape manager Troy Bell and his team to create the Water Warrior competition. The competition encouraged landscapers to cut down on a specific area’s water use on campus while still keeping it healthy. At the end of the academic year, those who cut down an area’s water usage the most won a coveted office trophy and gift certificates.

“Troy and the landscape crew work their tails off to make this place look good and save water,” Hodge said. “I appreciate all of them and all their efforts and their willingness to work with me. Without them, I wouldn't be able to do my job to keep this campus looking good.”

In the last three years, WSU decided to start implementing bigger Xeriscaping projects across campus. The biggest project to date is the OGX Wildcat Shuttle, which is set to begin operations in fall 2022 and will utilize xeriscaping.

“University officials and those of us in Facilities Management all agreed the shuttle would be a great place to implement xeriscaping,” said Troy Bell, landscape manager. “After our redesign, the shuttle will utilize waterwise plants and mulch on the bus route to conserve water.”

In the future, Weber State hopes to further increase the capacity of WSU’s Linquist Plaza water feature to use that water to irrigate different sections of the Ogden campus and make it more sustainable.

“I encourage all members of the WSU community to look through the water action plan because I am open to suggestions, criticisms and answering questions,” Hodge said. “This is a problem that Utah is facing, not just Weber State, and I think anybody can take part in the effective work we are doing here and add to it in meaningful ways.”

To access the WSU water action plan, which outlines these goals further, visit this link.