Weber State University was honored with first place for Energy Performance and second place for Presentation in the international Solar Decathlon Build Challenge.

The Solar Decathlon is a collegiate competition in which student teams design and build high-performance, low-carbon homes powered by renewables. More than 100 teams, including teams from Yale and Harvard universities, submitted detailed design proposals. From those designs, nine international teams were eventually selected to spend a year building their structures. Teams were judged on their innovation and excellence in architecture and engineering. Secretary of the U.S. Department of Energy Jennifer Granholm discussed the importance of the contest during the virtual awards ceremony on Sunday, April 18. 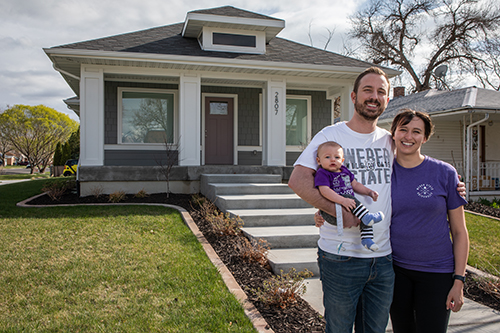 “You’ve learned how to get things done in the middle of a global pandemic, so the skills you have developed are going to take you far in life,” Granholm told the decathletes. “The resilience and the dedication that you’ve shown certainly are signs of a bright future. I hope you all stay in this field because the competition doesn’t end here because now we need you to bring those skills to the big decathlon, which is solving the climate crisis.”

“This was a collaborative effort of grand magnitude,” Farner said. “Along with students from multiple institutions, we collaborated with industry sponsors and Ogden City to make it happen. Nothing of this size or complexity could have been accomplished without the support of an entire community. This accomplishment reflects the effort of many dedicated individuals.”

Winning the energy category of an energy competition was very meaningful for the 50 students who were part of the effort.

“For us the competition was about the data, and the Energy Performance category data showed we had the most energy efficient home,” said Janae Thomas, student project manager. “By understanding and utilizing smart building principles, we can ensure a healthy quality of life for our community. We owe a thank you to professor Jeremy Farner for sacrificing family and personal time for the project and the team. We are also very grateful for the support from Weber State University, Wadman Construction and the many, many other sponsors that were essential to our build.”

University of Colorado Boulder took first place overall. All the finished projects are easy to tour in the Virtual Village. Normally the finalists’ projects would be featured during the Smithsonian Folklife Festival at the National Mall in Washington, D.C., but because of the pandemic, the tours, judging and announcement were all moved online.

Weber State’s net-zero home is located at 2807 Quincy Ave. and is now occupied by Melissa and Mark Haslam and their newborn, Maverick. The Haslams are both Weber State alumni who were selected from a pool of qualified buyers in October 2021, when the home was completed.

The Quincy Avenue home was designed to make the “true cost of ownership”' affordable by nearly eliminating all energy bills. Energy costs to operate the home are estimated at just over $100 annually or around $9 per month to be connected to the electrical grid. Weber State will monitor power bills for two years to make sure the HVAC and solar systems perform as they were designed.

The 2,540-total square-foot home (1,270 on main and 1,270 in a full basement) has 2,370 finished square feet with six bedrooms, two bathrooms and two family rooms. It incorporates portable battery backup technology to power the home’s critical functions for up to 72 hours if the electrical grid were to go down in a natural disaster or emergency. Not only does the solar array generate enough energy to offset the energy usage of the home annually, but it also generates enough electricity to charge an electric vehicle to travel 20 miles per day. Each feature was selected for its availability to homebuilders.

“We centered this home on the feasibility of being able to duplicate it in other places,” said team member Tyler Bone, “Everything is readily available, from the foundation to the electric system to the water heater. We implemented the elements in this house to share with as many other houses as possible.”

The plans, the features and a virtual tour are all available to review on the team’s website.

The lot was obtained as part of an agreement with Ogden City to show its commitment to revitalize neighborhoods and breathe new life into historic districts. With support from a number of Weber State and Ogden City groups, the university established the Student Construction Capital Revolving Fund. Proceeds on the sale of the home are being reinvested into the fund to continually repeat the process.

“I think it’s important to give thanks to the Department of Energy and the Solar Decathlon for hosting the competition and challenging us to find solutions for the future,” said team member Dallin Barton. Thanks also to Weber State and Ogden City for making this opportunity possible.”

Most of the student team members have now graduated and are successfully working in industry. They say the most important aspect of this contest was to help design and build a more sustainable future.

“This home, with its off-the-shelf energy features really pushes cities, homebuilders and homeowners to see that this could be the future standard for homebuilding,” Thomas said.