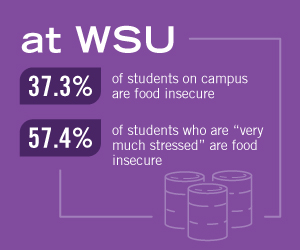 The survey, which was conducted over six weeks during the 2021 fall semester, involved all 16 Utah System of Higher Education schools and a random sampling of more than 5,600 students. The research found that, in addition to 38.8% of college students experiencing food insecurity, 46.6% of first-generation students were more likely to be food insecure and nearly half of Utah’s students of color (47.9%) were food insecure as compared to 36% of white students.

“Hopefully, with this report we can start dispelling some of that narrative around hungry college students,” said Yesenia Quintana, CCEL’s evaluation and community research supervisor who served as the survey’s primary investigator. “There’s all kinds of jokes around students eating ramen and cereal for dinner, and we all have this lighthearted spin around it. But it’s not very funny when you think about it, the fact that many college students are hungry.”

USHE schools have participated in nationwide surveys on food security among college students before, but this is the first statewide survey and serves as an important data baseline, Quintana said. Several Utah community organizations and other campuses participated in the survey’s development and the Robert Wood Johnson Foundation provided funding.

Though some demographics had higher rates of food insecurity than others, none have totally escaped from the issue, Quintana said.

“Everybody is impacted by food insecurity to a certain extent,” she said. “A lot of the universities and tech colleges are working to address it on their campuses and providing students with the support they need. But I think the survey shows how prevalent it is 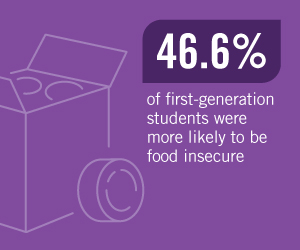 and how high it can be with at-risk groups.”

In addition to an overall look at student food insecurity, each school received a customized report with data about its students and their needs. Weber State’s individual survey found that 37.3% students on campus are food insecure and 57.4% of students who are “very much stressed” are food insecure. Students often cope with not having enough food by not eating or getting food from family and friends.

“The WSU Research Extension’s data are so compelling, especially related to specific Utah student populations that we've suspected have higher rates of food insecurity, but until now, didn't know empirically,” said Brett Perozzi, vice president of student affairs. “We have many programs and support services in place, yet these data help us increase our support and target our outreach efforts to support students most in need.”

Lack of food can impact a student’s academic performance, lengthen the time it takes to get a degree, and prevent them from participating in other activities like internships or campus events.

“Across all the different schools, food insecure students tend to have lower GPAs,” Quintana said. “If you’re food insecure, you’re more likely to say the lack of food has affected your academic performance.” 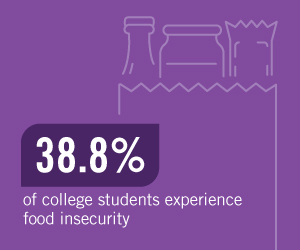 Those same individuals often struggle with other basic needs, like making rent or paying for utilities, or are facing serious health challenges. Having a better understanding of food insecurity among a university or college’s population will allow administrators to make more informed policy decisions.

“Food insecurity is a symptom of poverty that needs to be addressed,” said Katharine French-Fuller, CCEL’s director of community research. “The numbers help make it real. We need to figure out ongoing, lasting solutions like increasing SNAP enrollment.”

Since 2011, Weber State has operated the Weber Cares Pantry to help combat food insecurity among students. The survey found that many students aren’t utilizing food pantries, both on-campus or in the community, or even knew they existed. Quintana and French-Fuller agreed that increasing access and awareness of food pantries and destigmatizing their use are important barriers universities must overcome.

“We don’t need to accept food insecurity as a phase in someone’s life,” Quintana said. “We can hopefully provide some more support to students so they can eat.”