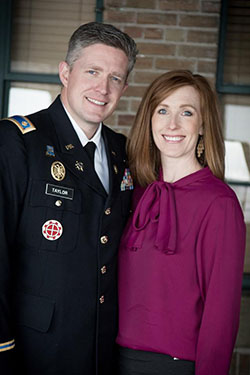 Jennie Taylor will accept the award for her husband, who died while deployed in Afghanistan in November 2018. The award is presented to one individual each semester, who has made a significant difference in the community through use of rhetoric, the art of effective or persuasive speaking or writing.

“The Freedom Through Rhetoric Award recognizes the lifelong accomplishments of an individual who has used public address to better the lives of the people in his or her community,” said Alexander Lancaster, Speech Showcase faculty advisor. “Maj. Taylor represents the power that speech has to do good for others and to shape the world around us. He gave his life defending the freedoms of all who call the United States of America home, including our precious freedom of speech. His service to the community and his country make him the ideal recipient.”

Brent Taylor was helping train Afghan forces when he was killed in an apparent insider attack. He had been a part of the Utah National Guard for 12 years and was serving a second term as mayor for North Ogden City at the time of his deployment.

The communication department in Weber State University’s Telitha E. Lindquist College of Arts & Humanities hosts Speech Showcase every fall and spring semester. The best speaker from each of the 26 sections of Principles of Public Speaking is selected to compete to become a finalist in the showcase. The top five finalists will speak in front of an audience and judges for a small cash prize.