OGDEN, Utah – Starting April 1, Weber State University’s Women’s Center will host a month of events designed to bring awareness to issues related to sexual assault. Events include Start by Believing Day and the Take Back the Night rally.

“We know that societal norms support sexual violence, such as strict adherence to traditional gender norms, but we also know that there is much that can be done to prevent violence by supporting and believing victims and having open, honest conversations about relationships and sexual health,” Davies said.

Events begin with the Take Back the Night rally and march on April 1 at 6 p.m. The event aims to unite community members in the fight against sexual violence, domestic and dating violence, harassment and stalking. The march will begin at The Monarch (455 25th St., Ogden), after a speech from keynote speaker Jo Blake, WSU assistant professor of performing arts. Following the march, a speak-out will allow survivors and the community to share their experiences and messages of support. Take Back the Night events have been held on campuses and in communities around the globe for more than 30 years.

On April 6, the Women’s Center will host “Start By Believing Day,” which provides an opportunity for communities across the world to unify with a single voice for those who have been victims of sexual violence. From noon to 3 p.m. in the Shepherd Union Atrium, participants are invited to take a photo with the “Start by Believing Day '' graphic, and share that photo to their social media accounts using the hashtag #startbybelieving. For more information and ways to get involved with the global campaign, visit this link. 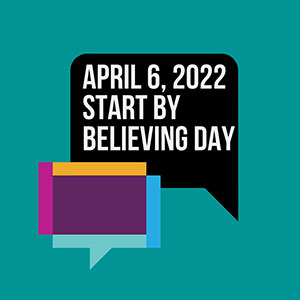 “On Start By Believing Day, the Women’s Center wants to show survivors the faces of people who believe and support them,” Davies said. “We know domestic and interpersonal violence have risen over the course of the pandemic, and we, as educators, friends and family, can show survivors that we care, that we believe and that everyone should feel Safe@Weber whether that’s on campus, in virtual spaces or in their homes.”

On April 20, the Women’s Center will host the monthly Sister Circle event focusing on self care. Participants will have the opportunity to make a pre-finals self care kit with a variety of items to choose from, including bath and body care, affirmations, craft kits, study snacks and more. This event will take place from 2 to4 p.m. in Shepherd Union 320 and from 5:30 to 7:30 p.m. in the Stewart Wasatch Hall in Wildcat Village.

“Survivors of sexual and interpersonal violence can face disbelief, victim blaming and criticism when they come forward about their experiences,” Davies said. “However, we are all capable of displaying compassion, affirmation and assistance to the survivors in our lives.”

For a complete calendar of events, visit this link.