Named as a 2020 Time Magazine Guardian of the Year for his work helping the Navajo Nation during the pandemic, Weber State University alumnus Pete Sands said his preparation to lead a Herculean effort took root in his high school library in Montezuma Creek, Utah.

“I spent a lot of time in the library in Whitehorse High School, and it opened my eyes to the world,” Sands explained. “At first, I saw through books, but when I came to Weber State, it expanded everything. It really made it okay to try different things: you know, studying for my criminal justice class at the same time I was reading lines for a play or sculpting clay, or taking business classes, and all the while, I had a construction job, so I was building homes.”

Sands left Weber State in 2008 with a broad education and a dream to perform. His varied experiences helped inspire his original music and lyrics, which he debuted in “coffee houses, corner stores, bars and open mics,” all across the west. He spent years on the road, sometimes sleeping in his car, playing solo acoustic sets, while building his band, his fans and his reputation.

In 2017, Taylor Sheridan, the writer/director of the TV series “Yellowstone,” contacted Sands to both write music and make several cameo appearances in the western drama. The work helped solidify Sands’ place in both the music and film industries.

Sands and Sheridan also started collaborating on rehab services for horses, which meant Sands added iron and leatherworking to his long repertoire.

Curiosity, commitment and courage gave Sands the confidence and skills to tackle problems he saw on the reservations. He accepted a position as communications director for the Utah Navajo Health System (UNHS), a not-for-profit community health center providing medical, dental and behavioral healthcare throughout the northern portion of the Navajo Nation and southeastern Utah. 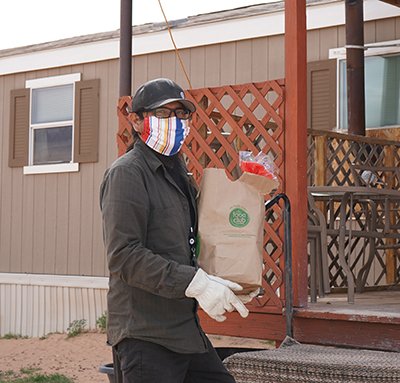 Shortly after taking the job, Sands began to hear word of a pandemic, and he knew whatever the impact on the rest of the country, it would be worse for members of the Navajo Nation.

“Reservations often face issues similar to those of developing countries,” Sands said. “Indian reservations have everything: respiratory problems, heart problems, diabetes, along with the impacts of uranium and coal industries. Then sprinkle a pandemic on top, and I just kind of had a vision, we’ve gotta do something to prepare for this, to help people the best ways we can.”

With the support of UNHS leaders, he established a COVID-19 relief fund and assumed the task of delivering food, water and firewood to those who were sick, aged, disabled or distanced from services.

“Now that the winter is upon us, firewood is more in need than water, but during the summer we delivered a lot of water,” Sands said. “Food is what we generally give out, and we have a lot of partners. We give different types of food, fresh food, healthier options. We don't give out any soda. We don't give out candy, nothing like that. That was another one of my goals from the beginning is to keep the healthier options during these times where people are just stuck at home.”

Under Sands’ leadership, UNHS formed partnerships that delivered food to 4,000 households a week. The fuel arrived by truckload from The Church of Jesus Christ of Latter-day Saints and the Utah Trucking Association, which delivered 3-million pounds of firewood. Sands and a team of volunteers cut and stacked piles in the yards of grateful residents. He also orchestrated the distribution of donations of diapers, formula, face masks and hand sanitizer. They also got residents tested for COVID at traveling test sites.

“I think what I'm most proud of is how people who have never thought that they could do something like this are doing things like this,” Sands said. “And they see someone like myself as an inspiration.”

Time magazine honored Sands as a healthcare guardian, one of the individuals in 2020 who “displayed the best of humanity—selflessness, compassion, stamina, courage.” 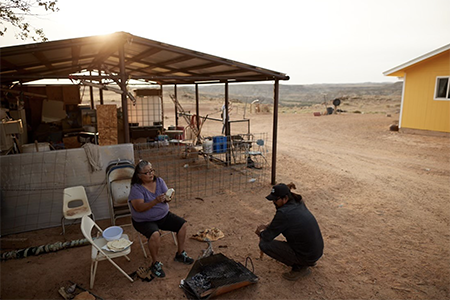 The award came as a shock to Sands who said it took a while to fully embrace the title of guardian.

“Being labeled as a guardian, it shows that you took care of somebody,” Sands said. “If I don't ever, ever do anything again, after this, at this one point in my life, I did try to help. I did help. And it brought hope to people and that's important to me."

He gives a lot of the credit to volunteers and partners who shared his vision. He also credits Weber State professors who encouraged his passions when he was “just a kid from a border town” and still on a voyage of self discovery.

“I've always wondered why my instructors at Weber State focused more on me,” Sands said. “They saw something in me that I didn't see myself. You've got to have someone to come in from the outside and say, ‘No, no, you're good at this.’ Once you shed all that armor, all that insecurity and fear and just jump into it and just let yourself dive into it, higher education is an amazing experience.”

After the pandemic Sands plans to refocus as a musician, songwriter and filmmaker. He’s already working on a documentary and panel presentations to tell the story of missing, murdered, indigenous women on Indian reservations. It’s a tragedy he feels compelled to make public.

“There's like so many things we’re fighting at the same time, you know,” Sands said “We have to pick our battles.”

For photos, visit this link: