OGDEN, Utah – Some government regulations aimed at reducing pollution can boost the profits of regulated industries, compared to outcomes in unregulated environments, according to research from Weber State University’s Goddard School of Business & Economics. 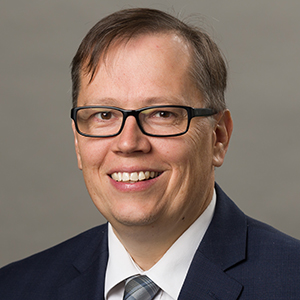 The right regulation also maximizes consumer welfare by reducing pollution, accomplishing its primary purpose, according to the peer-reviewed article, which was published in the journal Management Science. The article’s co-authors are François Giraud-Carrier, assistant professor of supply chain management at Weber State, and Krishnan S. Anand, professor of operations and information systems at the University of Utah. The research is based on game theory models, a common research method in economics.

The co-authors were pleasantly surprised to find that government-mandated pollution regulation can benefit companies under certain circumstances, and this result was a new contribution to research literature on the subject, the article says. This finding counters the common claim that all pollution regulations are burdensome and hurt businesses.

“Don’t push back on all regulations as a matter of principle, because there are regulations that work. That’s the paper’s main message,” said Giraud-Carrier. “We want to give people hope that there are ways to solve our environmental problems, including climate change, without hurting the economy.”

The research results also challenge the idea that taxes are the most effective type of regulation, instead finding that a “cap-and-trade” approach optimizes outcomes for regulated industries and the public.

Cap-and-trade systems create a market with a set number of polluting rights, often called “emission allowances.” Organizations that pollute less than they’re permitted can sell their excess allowances to companies that pollute more than permitted. This incentivizes companies to invest in efficiency and innovation, so they can profit from these sales.

Giraud-Carrier says the most beneficial version of cap-and-trade distributes allowances at no cost to companies, based on the emissions they’ve produced in the past, a method called “grandfathering.” This stands in contrast to auctioning, where companies must pay for allowances, a common approach that’s often seen as a tax by company executives, he said.

Under cap-and-trade systems, emission allowances are distributed on an annual basis. From year to year, the total number of allowances stays the same or gradually decreases.

The finding that cap-and-trade, when combined with grandfathering, can boost industry profits does not apply to all markets. However, the finding holds true for major polluting industries like oil and gas, cement, and aluminum, which are “dominated by a few competing firms holding significant market power,” the article says. Because of their market power, these firms can raise prices in order to fund pollution prevention and abatement while still making a profit.

“That’s good news for the firms,” said Giraud-Carrier. “For consumers, we do pay slightly higher prices, but guess what? We also get a cleaner environment, and we increasingly value that as a society. So, taking into account the reduction in environmental damages, consumers are better off, firms are better off, and overall there’s a better economic outcome.”

Not every regulated company profits under this system, but the industry as a whole fares better than it would under tax-based regulation because the money that would go to the government as tax instead stays in the industry, said Giraud-Carrier — a benefit that makes the system more palatable to companies than other forms of regulation.

“If we want to solve our environmental problems, it is important we adopt regulatory approaches that aren’t going to be shut down by powerful interests,” Giraud-Carrier said.

Cap-and-trade can be applied to a wide range of problems, from the global climate crisis to Utah’s inversion. The 2020 Utah Roadmap report, prepared at the request of the Utah Legislature, recommends that state leaders “participate in national dialogue about market-based approaches to reduce carbon emissions,” including cap-and-trade.

Cap-and-trade has a solid track record over the past 30 years, according to a 2015 review of its history in the Review of Environmental Economics and Policy. Cap-and-trade was used to eliminate lead from gasoline under President Ronald Reagan and to halve emissions of sulfur dioxide, the culprit behind acid rain, under President George H.W. Bush.

“The beauty of the cap-and-trade system is that you’re using a market mechanism to fix problems in the market,” said Giraud-Carrier.

The market problem that cap-and-trade solves is called a “negative externality” in economics. Negative externalities occur when companies don’t bear the full cost of their actions, instead passing on some of the costs to third parties who have no say in the company’s business decisions.

If people get sick because of pollution coming from a nearby plant, the plant doesn’t pay their medical bills, Giraud-Carrier said, so plant owners don’t factor that cost into their decision to pollute. Similarly, in the absence of regulation, companies can offload the costs of pollution abatement to the broader community, so they have no incentive to pollute less.

“Nobody likes regulation. We understand that, but regulation is sometimes necessary,” Giraud-Carrier said. “Unless you have some kind of regulation, there’s nothing natural to prompt individuals and companies to change their behavior with respect to the environment.”

While effective, a cap-and-trade system with grandfathering only improves industry profits under a moderate level of regulation, said Giraud-Carrier. If the cap on total emission allowances were drastically reduced, this finding likely would not hold.

“Clearly, cap-and-trade should be one of the instruments used to address climate change, but we’re not saying it’s the only way,” said Giraud-Carrier. “It should be one element in an arsenal of tools, one that’s particularly well suited to large, concentrated industries.”

For photo a photo, visit the following link.