OGDEN, Utah – Jennifer Morales has never found herself short of opportunities while attending Weber State University, and an award from the Women Tech Council is proof she’s taken advantage of all that’s available. 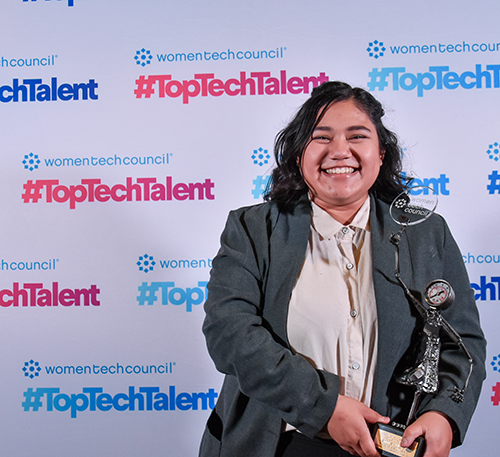 Morales, 20, is a junior double majoring in computer science and professional sales in WSU’s College of Engineering, Applied Science & Technology. The United Nations marks Feb. 11 as the International Day of Women and Girls in Science. As the oldest of seven siblings and the first in her family to attend college, Morales said support for education and science started in her home when she was a child.

“I first realized the difference in being a first-generation college student when I was a little girl and my parents couldn’t help me with my homework. That was luxury I didn’t realize other people had,” she said. “However, my parents have always supported me. They always told me, ‘Go to college. That’s the future.’”

Morales grew up in Ogden and graduated from Ben Lomond High School. She applied to become a WSU Ambassador, and when she was accepted, began to participate in events on campus.

“With all the opportunities Weber State had for students, it just seemed like a place I could call home,” she said. “I could stay in the city where I grew up.”

Being a first-generation student comes with unique challenges, but it’s also made her more resourceful and open to options that come her way, Morales said. When she took home a prestigious award for her college work, her parents were at her side.

In October 2020, Morales was honored with the Student Pathways award from the Women Tech Council. The Women Tech Awards aim to recognize “the talent, impact, change-agents, innovators and women in technology that work wirelessly to build companies, communities and careers,” according to their website.

Morales had heard about the award when a friend was previously nominated and imagined it would be nice to be recognized that way. She was surprised when she found out she had been nominated – and even more so when her name was called during the ceremony.

“I did not think I was going to win, so I had nothing prepared,” Morales said. “I walked out on stage and spoke from my heart. I thanked my parents, I thanked everyone supporting the mission of women in tech. All the award winners are amazing. It was cool to be among those women.”

Ana Reyes and Breanna Campbell in the Weber State Center for Technology Outreach nominated Morales for the Student Pathways award. They praised her involvement in on-campus clubs and activities and for her volunteer work with the center. Morales held an internship involving software engineering at Northrop Grumman in the fall.

“Through many challenges and adaptations, Jennifer has made a difference at our university, exemplified the mission of Weber State, and has positively impacted the people around her,” they wrote in the nomination letter.

In the United States, women earn only 18% of computer science degrees, according to the statistics from the National Science Board. Weber State’s computer science program is made up of 17.6% female students. Being one of the few women in STEM can come with unique pressures, but Morales said she took it as a challenge to prove herself. Finding support among other women was also important.

“Definitely surround yourself with women who are doing what you want to do,” she said. “It’s so powerful to have that community of women. We're just able to reassure each other and remind each other that yes this is hard, but we can do it, and it’s going to be worth it in the end.”

While at Weber State, Morales said she’s never been told “no” when it comes to opportunity – whether that’s deciding to be a double major or pursuing internships in her field. Once she graduates, Morales said she hopes to work as a programmer for a start-up with a mission to make the world a better place.

“Weber State has never put any limits on what I can or what I should do,” she said. “They give you the resources to be the best you can be.”