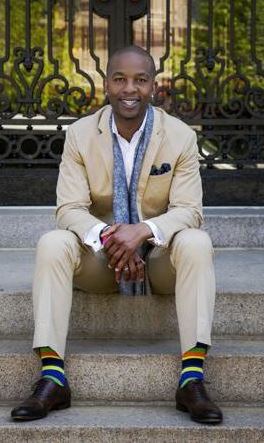 Wade’s address, “Intentional Diversity & Inclusion in relation to Athletics,” will be followed by a question and answer session. Dominique Williams, a member of WSU’s women’s basketball team, will moderate the session. Prior to the event, questions can be submitted at this link.

Davis was born in Little Rock, Arkansas, and graduated from Weber State in 1999 with a bachelor’s in business administration. As a football cornerback, he played three seasons, earning honorable mention All-Big Sky Conference honors his senior year.

Davis spent four preseasons with three NFL teams and also played in NFL Europe. He came out as gay in 2012, nine years after the conclusion of his professional football career, and since then has been an advocate for the LGBTQ community. Wade is the  NFL’s first LGBT inclusion consultant and has consulted for numerous professional sports leagues on issues of sexism, racism and homophobia.

Davis received an honorary Doctor of Public Service degree from Northeastern University for his leadership and ongoing efforts to eradicate homophobia and sexism in athletics. He is currently working on his first book.

“The Allen Holmes Diversity Symposium provides an excellent opportunity for both our student-athletes and our coaches to gain valuable insight that can springboard further conversations within their teams,” said Meagan Thunell, WSU associate athletic director. “This past year, there have been many events within our country that have brought pain to the BIPOC (Black, Indigenous and People of Color) community and renewed commitment to change within many Americans. This year's symposium will help not only our athletic programs, but also our entire Weber State community learn how to have meaningful and deliberate conversations that can yield continued growth and change.”

Holmes played an important role in fighting against racist ideas among the student body. In recognition of these contributions, a permanent endowment has been created through private donations to sponsor an annual symposium that deals with diversity and unity.

For a photo, visit the following link.