OGDEN, Utah – Andy Truong has always created his own path in life.

At 23, he’s carved out a space in the competitive world of makeup artistry, running a full-time business for glamorous clients at big events — or just for their everyday lives. Truong has worked New York Fashion Week and counts some of the “Real Housewives of Salt Lake City” as repeat clients.

He’s done it all while attending Weber State University and being an active member of the Weber State Spirit Squad dance team.

“I always look at my life like it’s a big timeline, and these moments mark a little spot,” Truong said. “Every time something like (booking the Housewives) happens, it makes me really happy.”

Truong, a communication major, is a first-generation college student. He grew up in West Valley City as one of four children of Vietnamese immigrants. As a dancer, he calls himself “a bit of a late bloomer.”

“I didn't start dancing until I was about 13. Growing up with traditional Asian parents, they don't really support anything that's deemed a waste of your time,” he said. “Most of the people I grew up dancing with started when they were 2 or 3, so I feel like I had a decade of catching up to do to be at the level I wanted to be and to match everyone.”

Truong’s favorite forms of dance are technical, lyrical and jazz. He enjoys the freedom and self-expression dance provides.

“I feel like no one can tell you who you can and cannot be while you're moving and dancing and just feeling yourself,” he said.

When he was a junior in high school, two Weber State dancers approached him at a competition and told him he should apply to the university since the athletic dance team would soon be accepting male dancers. He kept their words in mind throughout his senior year and eventually selected Weber State as his college of choice.

During his five years on the team, Truong competed twice on the national level, and helped the team take first-place win in the hip-hop category at the 2021 NCA & NDA College National Championship. He’s also one of five captains for the Wildcat’s 2021-22 season.

“One of my favorite memories for sure would be winning championships for this school,” he said. “But cheering at games is the most fun I ever have with this team. The dancers become like my family here,” he said. “I just feel like that's been like the most amazing part about dancing here.” 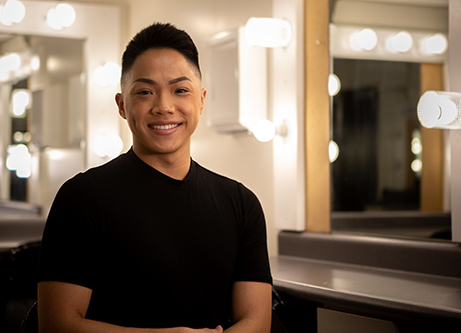 Erica Williams, who coaches the dance team, said Truong is an amazing and supportive teammate.

“He brings so much joy to practice,” she said. “He makes the team laugh when we are learning a new trick or skill, so his teammates don’t feel so stressed. He is always willing to help in any way that he can.”

Once he competes in Daytona Beach this spring, Truong plans to hang up his dance shoes to focus on his booming business as a makeup artist.

Like dance, Truong found his way to makeup while he was in middle school. In eighth grade, he began watching YouTube tutorials from famous makeup artists and teaching himself from there.

“I would go home every day after school and just watch them religiously,” he said. “And I just fell in love with the transformation of it all.”

For the first few years of his career, he didn’t do makeup on his own face at all, but worked on others. First on his mom and sister and then on his fellow dance members, growing more confident with his skills. In high school, he did makeup as a bit of a side hustle and, once he graduated, realized he could turn his hobby into a job.

“That's when I started to really, really focus on my business and make it bigger and build the clientele that I have,” he said. “It wasn’t until after I grew up a little bit that I realized this is what I want to do for the rest of my life.”

Truong used social media to promote his business, gathering clients by using Utah-specific hashtags and building his portfolio on Instagram. He usually sees five to 10 clients a week for $150 a session, largely creating glamorous looks for brides on their wedding day. He said he enjoys the experience he can provide to his clients during important moments in their lives. 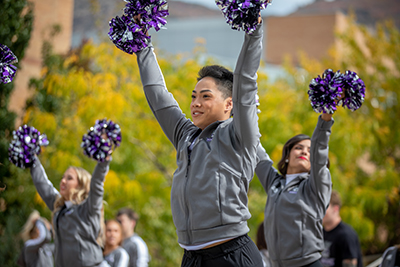 “If they're someone with low self-esteem issues or like insecurities, they get their makeup done and they feel like a million bucks,” he said. “Watching their face light up when they look at themselves in the mirror is what has kept my passion and drives me to just continue doing what I do.”

Williams hired Truong to do her makeup for her engagement and bridal photos, and said her family continues to use him for their events. He’s also used his knowledge to help the team.

“He’s able to help me pick out good makeup for the team that is uniform but works well for all team members,” she said. “He also teaches his teammates how to properly put on makeup and different techniques that are beneficial for them.”

One of his career-defining moments came when one of the stars of “The Real Housewives of Salt Lake City,” Jen Shah, booked him to do her makeup.

“I was in shock. I was like, I need to not fangirl and go into it like she’s just another client — and she is,” he said. “Now that I've been around them for so long and worked on set, it’s just kind of my day-to-day. But even when I do get bookings for them, it still warms my heart that this is how far I'm taking myself.”

Truong said he enjoys hanging out on sets and big productions and hopes to be working more in the television and movie industry in the next few years. After switching majors, he has another year or so before earning his degree.

“It’s been very enjoyable at Weber State,” he said. “The school accepted me from day one, so I’ve continued to just love it here.”