The new year brings a new dean to the Telitha E. Lindquist College of Arts & Humanities. 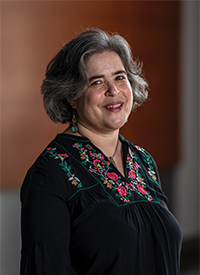 Deborah Uman believes the study and practice of arts and humanities helps people and societies survive and thrive, particularly during periods of tumult. She plans to help the Lindquist College support students and enrich the community with cultural excellence.

“I am excited to join WSU with its deep commitment to access and equity,” Uman said. “Lindquist College offers extraordinary opportunities to students dedicated to creativity and analysis. I look forward to working with the outstanding faculty, staff and students to find new ways to communicate our shared understanding of the importance of arts and humanities in our rapidly changing world.”

Uman specializes in English Renaissance literature, including writers such as William Shakespeare and John Milton with an additional focus on female writers from the period including Mary Sidney and Aphra Behn.

At St. John Fisher College in Rochester, New York, Uman chaired the Department of English. She also served as interim director for the film and television studies program and previously directed the women and gender studies program.